A Magi-cal Approach to Worship – a reflection for epiphany 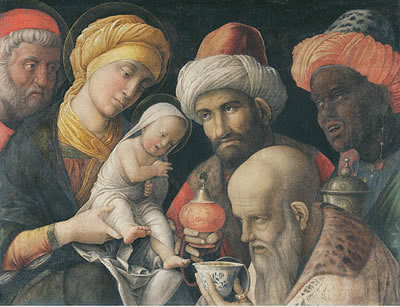 What are the Magi doing in the Christmas story – they’re a bit mysterious, don’t you think? And for that matter, what is a magi, or a mage? Probably best to clear up a bit confusion first.

We tend to lump the Magi in with everyone else in our nativity scenes. It makes for a neat picture, but it seems pretty unlikely that they turned up just after the shepherds. There are a few good reasons to rethink our traditional Christmas chronology:

a)    In verse 1 Matthew is clearly starting a new section, and talking in general terms about the time of King Herod, not about the next day
b)    the word for child used by Matthew here wasn’t used of babies
c)    in verse 16, Herod goes after children under 2 years, based on the date the star had appeared

So Jesus was probably about 2 years old at the time. And the magi were people of some resources (see their presents!) who watched the stars and knew that something pretty special had happened.  Tradition says they were priests from Persia and wise men.  Tradition also says there were three, which is mainly based on the three gifts, but we don’t know for sure.

But we do know what Matthew has told us.  Has it ever occurred to you as terribly sad that the chief priests and teachers of the law seemed know the prophecies so well that when they heard the story of the Magi they could tell them exactly where to look, but they didn’t make the trip themselves? The religious leaders of Judah couldn’t be bothered to make the 6-mile journey to worship the messiah, but these quirky foreigners of indeterminate religion could. Foreigners, or Gentiles, who had not just gone six miles but had crossed whole countries. The elite of the religious Jews wouldn’t even go to a neighbouring town – it took outsiders to make sure the Son of God was worshipped.

The story of the Magi is so special because they are the first people who are described explicitly as worshipping Jesus. And as worship leaders, planners and participants, I think we can learn a thing or two from them.

They made an effort
Travelling however many hundred miles to worship this new king was a bit of a hassle for them. They must have had other things to do! But they let the Son of God interrupt their lives and call them to worship. We’ve got many calls on our time – how strongly does the call to worship feature? Do we worship in the easiest way, or in a way that requires effort?

They came prepared
They came with gifts. They thought through what they were going to give when they got there. Did they understand the prophetic significance of what they gave? We don’t know, but no doubt there was meaning for them in their worship gifts. Sometimes we think of minimal preparation as more spiritual – the featured worshippers of the early new testament didn’t seem to think so.

They were full of joy
The chance to meet with this newborn Christ really made their day. They were overjoyed – they’d arrived, now was the moment, you can feel the anticipation. Joy and celebration are a vital feature of worship. We should expect to experience joy when we’re worshipping God.

They saw the child
They could have left their presents at the door, but what they most wanted was to see the child. Worship would be easy if you could just turn up, do your bit, sing a song or two and go home. But true worship is an encounter with God. In true worship, we see Jesus.

They bowed down and worshipped
They knew what to do in the presence of a king. Had they planned to bow or could they simply do nothing else when they saw him? Face to face with God means on our face. When we encounter God, like the magi, like the elders in revelation, like the priests in the first temple and like so many throughout the Bible, we begin bowed down. Because he is God.

They opened their treasures
I think this is one of the most beautiful verses in the Bible. What a wonderful way to describe worship in the presence of the King of kings. Can it be said of me, my church, my worship team, that when we come to God we open our treasures? Can it be said that we lay before him the most precious things we have? What are our treasures – money, time, talents, reputations etc? The Bible says that were your treasure is, that’s where your heart is. Those who open their treasures are those who have given him their hearts.

(What Kind of Throne, by Joel Payne, available on http://www.resoundworship.org/song/what_kind_of_throne)

This post first appeared at EngageWorship. It is written by Joel Payne who lives in North London, working as the Minister for Prayer & Worship at St James Church in Muswell Hill. Previous to that, he spent a decade at St Michael le Belfrey Church in York, practising his song-writing on an unsuspecting and generous congregation.