Over the last 15 years the movement that has been called ‘alternative worship’ has ploughed a furrow in worship coming up with inspiring new songs, liturgies, rituals, visuals, installations, artistic creations and worship experiences. I personally have found it incredibly exciting, renewing my faith and sparking my imagination in all sorts of ways. 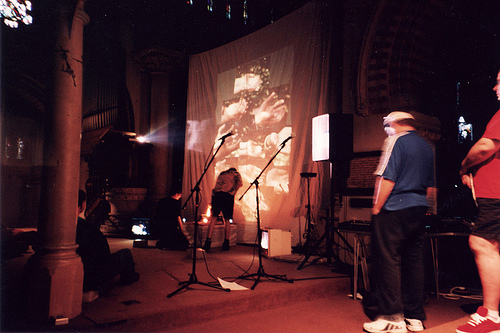 When the movement began it was shocking. Visual projections, new technologies, DJ music, and so on all seemed out of place in church. The re-theologising that went with it to contextualise the gospel in a postmodern world was also perceived as threatening. However the climate has now changed and many of the discoveries made in alternative worship don’t seem so shocking any more – many of the creative practices have crept into the mainstream and actually they hold some clues for how to renew worship in many of our churches. Alternative worship groups were simply early adopters on the front edge of what was to come. 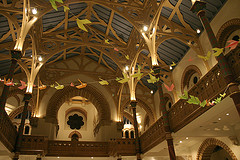 In worship there seems to be a choice between the liturgical tradition which is served up in a very similar fashion each week. Whilst it holds the potential for depth it can easily dry up for people and seem very samey. On the other hand the more charismatic tradition in worship has created space for free expression in singing intimate songs of praise and worship, along with ministry. But this worship often dries up for different reasons – it lacks depth and has ended up being very predictable in its own way as well. The range of themes and language in the songs and prayers simply doesn’t address all the issues of life. After a few years people want something more. Alternative worship looked for a third path that broke that false dilemma. In doing so it turned back to the liturgical traditions of the church but reframed them often in simple but imaginative ways, making connections with everyday life and popular culture. This is why I think many of the groups found a home in Anglican churches, because they were finding ways to make the traditions live again rather than turning away from them. It is common to find groups working with the seasons of the church calendar, using basic structures of services as building blocks for liturgies, finding forgotten treasures in the tradition such as the labyrinth and reinventing them, taking communion back into the context of a meal and so on. 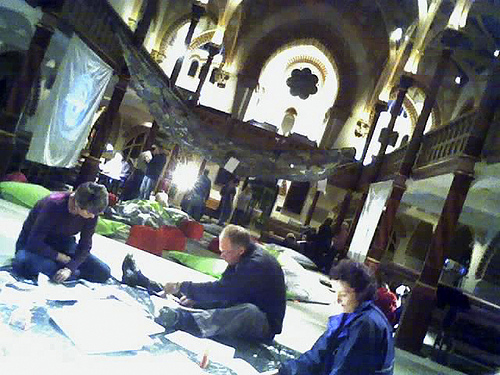 At the heart of alternative worship is creativity and imagination. I am a member of Grace, an alternative worship community that is a congregation of St Marys in Ealing. The creative ideas that have come out of a small group of people there is amazing – I so enjoy the creativity in the group. Our best worship services always have revolved around good ideas. Executing them is the easy bit usually. There are several myths around creativity. One of the myths is that it is a gift that some special people have. If we don’t think we have the gift we shrug our shoulders and say ‘I’m not creative’. According to a survey the difference between someone who is creative and someone who is not is that people who are creative think they are! So one of the challenges in our communities is to encourage an environment where people believe that they are creative because they are made in God’s image. This also has to be an environment in which failure is acceptable and we as leaders let go of control – if we can’t fail and haven’t got permission we won’t risk being creative. 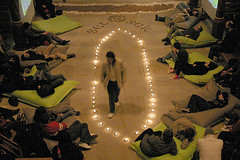 The root meaning of the word liturgy is ‘the work of the people’. How can we recover the notion of worship as liturgy in this way? We live in a consumer culture and we easily get trapped in provider/client relationships in churches. We the leaders are the providers who serve up worship for our congregations. Alternative worship communities have shared out the production of worship in radical ways. To be involved means to participate and create. It’s hard to just be passive. We recently had a service in lent that was a ‘bring your own station’ service. We gave people the theme and some suggested passages such as Jesus journey into the desert and people then had to come with something to set up in the worship space. In the end 14 people brought things ranging from an icon and candle, reflections for prayer, original film/animation sequences, readings, and so on. After a brief introduction and opening prayer, the worship service was simply to walk round and interact with the stations while music was quietly played in the background. We then concluded with a final prayer together. It was stunning. It could also have been a disaster if no-one brought anything and we genuinely had no idea what people were going to do in advance. Two people did things at that service who had never contributed before which was especially pleasing. Also in lent we ran a lent blog – a web site where a different member of the community can post a reflection each day to help us reflect on our discipleship through lent. Both these things were highly participative. A key task of leadership is to shape the cultural environment. How can we shape that environment to be one of creativity and participation? 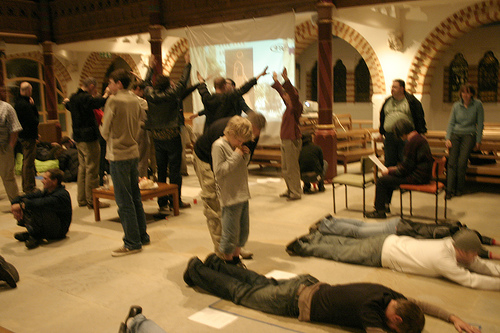 I have learned that when we have a planning session with free flowing ideas it is often the most crazy ideas that end up being the best things we have done. I can think of a Grace meeting where someone suggested getting a huge block of ice to suspend off some scaffolding, or another where we floated the notion of text message confessions where people would send their confession as a text message and receive an absolution in reply, or the use of a parachute in worship or recording meditations for a narrated labyrinth journey where we gave people individual CD walkmans. All of these notions were absurd at the time but we ended up taking the risk of pursuing them and have done those and many more. Tony Campolo tells of a survey amongst old people where they are asked to reflect on their lives and think what they would do differently. One of the things that came out is that they would risk more. Our next worship service at Grace is walking an outdoor labyrinth – we have got to mow it in the grass at the front of the church. When we came up with this idea we didn’t know how to mow a labyrinth and didn’t have a mower. Now we have borrowed one and think we can do it with some careful planning with string, some tent pegs, and sticks, and fine weather – it should be fun. This is to celebrate the coming of the Spirit so we will anoint people with oil and pray for the filling of the Spirit in the centre. Then we are having storytelling around a firewok (a portable fire). It’s a risk but I am sure we won’t regret it. 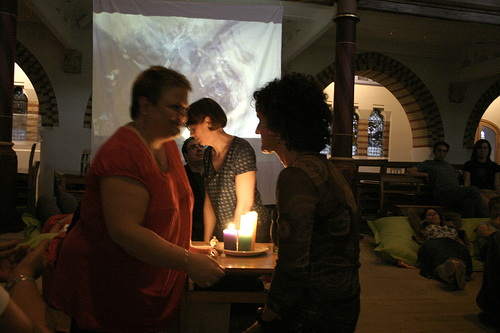 One of the brilliant things about alternative worship has been its engagement with everyday life and popular culture. The music, images and rituals often make connections that engage in this way. A track played in a service may well be heard on the radio in the week. A visual projection (trafiic for example) may remind you of the worship as you drive through the city. This incarnational instinct is really important in mission. Use the stuff of everyday life as the building blocks for worship. This brings the real world into our worship and enables God to be relocated in everyday life. The other aspect of engagement is to take the creative worship and spirituality out into the cultural market place rather than just doing it behind our four walls. Just recently I have taken part with some others in running a stand at the London mind body spirit festival which has all sorts of alternative spiritualities. We set up some prayer stations and offered foot massage and prayer for healing with the laying on of hands and anointing with oil. It was incredible how open people were and wanting prayer. But these people would never have come to one of our worship services. So a question several alternative worship communities are wrestling with is how to take the best of what we create, and engage out there rather than expecting people to come to us.

These four words – creativity, participation, risk and engagement are actually the ethos of Grace, the alternative worship community I am part of. We identified these values as part of a weekend reflection last year on where we were headed as a community. 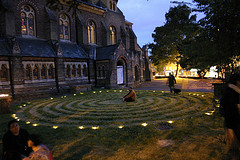 Sometimes if you visit a service of an alternative worship group it can be intimidating so how do you begin to incorporate new ideas into worship in your church? There are two routes I think. The first is to start something parallel to your existing services. In this case I think you should pull together a small group of interested people. If there is anything close by go and visit and evaluate. Greenbelt is also a wonderful place to visit. Then pick a festival in the church calendar, dream some ideas together and plan something not in the main morning service. Invite other people and see where it leads. The second is to change the culture of worship production and consumption in your church one step at a time. Incorporate the gifts of the community in worship so that it truly becomes the work of the people. Again start small – begin with the prayers that often have space for ritual, trying new things and so on and build up until people from the community are leading lots of aspects of the worship and suggesting ideas and creating things in ways you never imagined.

This post was originally published in Resource (Anglican Renewal) Magazine. Jonny Baker is a leader and member of Grace, an alternative worship community in London, England. The photos are taken at Grace – click through to be inspired by more.