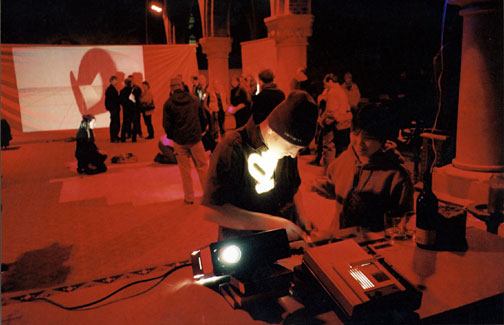 Given the recent somewhat controversial posts and discussions here about whether contemporary worship music was theologically shallow, boring or even annoying I thought it would be good to look at a totally different expression of worship. Here Jonny Baker considers some alternatives:

In an old gothic church in South London, images of the city are projected on white sheets that surround a worship space. The images are gritty and urban – towerblocks and street scenes. On the floor is a huge map of the city made out of pages of a London A-Z map. Bread and wine rest on a holy table – in this case a concrete slab on the floor. Encircling the concrete are words of scripture in a circle projected from above. An urban crowd, age range 20-40ish gradually drift in. A DJ is quietly spinning tunes that evoke an atmosphere. There are no pews just a hard floor to sit on. It is a fantastic space. This is part of a series called concrete liturgies by a Christian community Vaux – where they are exploring what it means to express faith and worship in the language of the city.

One wonderful unforgettable moment is when everyone is invited to draw on the map a journey they have made in the city that week. The ink is pretty thick and stands up from the paper. The lights are turned out and a UV light is turned on. The effect is magical – the journeys that weave across the city glow in the dark. We listen to scriptures on the incarnation, that God loves the city and the people who live in the city, that Christ is in us and where we have been in the city Christ has been. It is a simply stunning moment.

A few minutes later we are invited to interact with some prayer stations for the city that have been set up at various points around the worship space. One involves kneeling at a side chapel and praying intercessions for the city which are recorded onto a cassette tape. When we gather back together the prayers of the people for the city on the tape are taken and embedded in a concrete slab that is made there and then. This will no doubt become the table on which bread and wine are placed in a future worship service. We share a liturgy, the urban mass, that has been crafted in such a way that it connects with the tradition of the church and yet the language has been remade to connect with the city. We remember Christ and eat drink his body and blood which becomes part of us as we are blessed and disperse to our homes in the city. This is an example of ‘alternative worship’, a creative movement that has quietly grown in the UK amongst young(ish) adults over the last twenty years.

In most of the Western world there are basically two types of worship you’re likely to find in churches. Liturgical worship that follows a set pattern or structure in a prayer book led by professional clergy is the basic diet of mainline denominations. And blocks of singing led by a keyboard player, guitarist or worship band are the staple diet of worship in charismatic/evangelical/pentecostal churches. On the one hand, the liturgy has depth but repeated week in week out can become very dry and formulaic, seems to reflect a bygone era, and makes very little connection with contemporary life. But on the other hand, worship led by a band whilst it can be exciting isn’t without its problems – a cult of the worship leader as a sort of guru has emerged, worship easily gets trapped into performance mode, and the range of theology in the songs is often pretty thin. It seems to suit an adolescent stage of faith which is brilliant if that’s where you are at. But when you have been a Christian for a few years, your faith is equally as real but you probably have a different set of questions and struggles. When a friend is diagnosed with cancer, raising kids is a challenge, God is distant, or life is hard this kind of worship can seem irrelevant and disconnected from everyday life. Themes that are commonplace in the hymnology of the psalms – anger, lament, disorientation, exile – just don’t seem to fit with this modern worship culture.

I meet increasing numbers of adults who are struggling with this dilemma. Alternative worship has ploughed a third way, a way that embraces contemporary (postmodern) culture but whilst re-engaging and reframing tradition at the same time. It’s creative, liturgical, contextual and passionate.

We need a baptism of imagination about worship. It is too often predictable, uncreative and stuck in a rut. Part of what it means to image God is to be creative. We need to develop communities of worship that celebrate and invite creativity. I was amazed when I discovered that the word liturgy actually means at its root ‘the work of the people’. In this sense rediscovering liturgy will mean that we develop worship that comes out of a worshipping community’s life rather than worship that is served up by experts or professionals. Something happens when the worship is ‘our’ worship that we have dreamed and made however raw, gritty and real it is. And the range of possibilities for worship is only limited by our imaginations – let loose the DJs, photographers, digital artists, story tellers, film makers, liturgists, painters and so on.

I recently went to a worship service in Bangalore India. The building was like an English castle, the liturgy was spoken in English, we sat on pews, the hymn tunes were Western and played on an organ, and the priest wore long robes. In fact I could easily have been in a Cathedral in London a hundred years ago but I was in India! This is the opposite of what I mean by contextual. Worship that is contextual is expressed in the language, signs and symbols of that culture so that it feels authentic and doesn’t alienate people by seeming foreign. Too often church feels foreign to those outside it because of the cultural forms of worship. Alternative worship has intentionally made worship out of the stuff of everyday life and popular culture to help bring the real world into church and help people relocate God back in the real world. The heart of the Christian story is the Passion – Christ’s self giving love supremely shown in his death on the cross. Following in the way of Christ calls us to be passionate (self giving) people. True worship according to Romans 12:1-2 is precisely that – our whole selves offered to God as living sacrifices which is why this connection with the real world is so important.

I am involved in an alternative worship community in London, Grace, that has been going for about 13 years. We recently had a service we called simply ‘slow’. The worship space was divided into two halves by back to back projection screens. On one side a VJ mixed slow images and the other fast images. People sat whichever side they related to most. We took about 10 minutes in contemplative prayer to quiet down in God’s presence. All the while ambient tunes were played by a DJ. A glass jar with sand in was shaken and placed to settle down as picture of what stilling our hearts might be like. An image of the jar was projected on the screens while we listened to Radiohead’s The Tourist with the lyric ‘hey man slow down’ projected over the image of the jar. The story of Mary and Martha was used as the basis for thinking about the pace of our lives and whether we are naturally more commuters or contemplatives and what pace God might be calling us to. The service had been inspired by Asian theologian, Kosuke Koyama who suggests in ‘The three Mile an Hour God’ that God’s pace is walking pace. A couple of chants were sung over chilled electronic tracks and we made prayer bracelets and used the Orthodox Jesus prayer as a way of asking for God’s mercy in our lives. In response to the service we were invited to take away a boiled sweet to suck on slowly if we want to ask God to help us slow down or a soft sweet to eat quickly if we felt the need to speed up.

In one short article it’s hard to capture a movement but I hope it gives a bit of a flavour. I am of course completely biased – I love this kind of worship. I find it connects me afresh with God and fires me up to re-engage with the real world. However, it would be a mistake to think that it is a new solution to be copied. The important part is not the sylistic aspects of worship – different music, video loops, and so on, i.e. another consumer choice. The real gift and challenge that alt worship makes is for us all to get creative and contextual and grow worship that is truly the work of the people in our own communities.

This post was originally published in Relevant Magazine. Jonny Baker is a leader and member of Grace, an alternative worship community in London, England.

Let the church lead worship, not the worship leaders