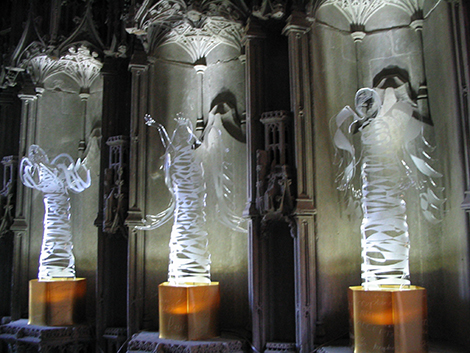 It all started in the winter of 2006 when I first walked into the 500 year old gothic Ramryge Chapel within St Albans Cathedral looking for a place to put some art. I suppose I should really thank my atheist art tutor Antje for sending me out looking for a site to design some sculpture for. But more importantly,   I should be thanking my dear sister who exhorted me to pursue my art as she struggled with, and finally lost, her battle with cancer in 2002. She inspired me to go to university in my late thirties and five years after her death, I achieved an Art degree, with the ‘Ramryge Angels’ being my final degree piece. It was also her choice of ‘Angels’ by Robbie Williams for her funeral music that got me started down that road. During my own journey to come to terms with her death, I discovered the five stages of bereavement initially suggested by Elizabeth Kubler-Ross. These stages would assume a new significance for me with art reflecting life.

When I went into that little Chantry Chapel (a place traditionally where a Chantry Priest would say prayers for the dead) something happened. The chapel was hardly used except for robing, occasional confession and sometimes as a brief storage space for urns containing ashes before interment. That day the chapel was sheltering the ashes of a child. As I stood in the ancient space looking up at the six empty statue niches and down at the urn, my mind began to whirl. If I had been the child’s parents, what would I have wanted in these niches watching over my precious little one?

Over the months my research and ideas began to take shape. Gradually designs based on the stages of bereavement began to develop, initially from studies of photographs taken of me working out poses that evoked the emotional impact of the stage. My dance training hadn’t been a waste, it informed the shapes that people now find they relate to. They were authentic and visceral, from the guts of my experience.

Once the final Angels had been designed, etched and heat sculpted from sheet Perspex, they were installed into the chapel niches. Visitors wrote amazing things in my humble little comments book, telling their own stories of those they had lost and thanking me for giving them hope. I was moved.

The Friends of the Cathedral eventually decided to buy the Angels for permanent display and they have been there now since 2007.

The card packs were designed to accompany the Angels, but soon became important in their own right. Counsellors found that people connected with the visual where they had struggled with mere words. Bereaved people found the concept of stages helpful – that they were on a journey that they would eventually emerge from rather than stuck in denial or depression. The fact that I had added my own stage of ‘Peace’ to the original 5 – ‘Denial’, ‘Anger’, ‘Bargaining’, ‘Depression’ and ‘Acceptance’, seemed to make a huge difference, a hopeful difference.

It isn’t until we experience a death or separation that we will understand what grieving can feel like, how we can go a little mad for a while or move in and out of grief stages along the way – there is no rhyme or reason to it, but nor should there be any rush. The only way is through. 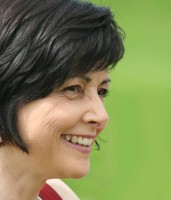 Claudia Brown is an artist mainly specialising in perspex.See more at perspexangel.co.uk. She  creates jewellery, functional items, sculptural forms, gifts and lighting, and is interested in the idea of ‘drawing with light’, by etching onto the surface of Perspex.

Claudia is happy to work to commission and enjoys the challenge of working on creative projects that mean something special to those she is working for. The journey is part of the process, using her creative and practical skills to find solutions. Christian and spiritual themes often form part of her work as she seeks to create pieces that have a deeper resonance.

Claudia also undertakes commissions and low cost freelance graphic design projects with a growing client base of church-based organisations. Do contact her for further information.