Ask the expert – how to mic a piano 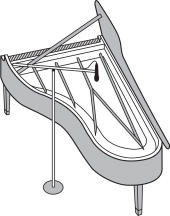 Alastair Gibson asks for ideas in how to mic a grand piano. Geoff Boswell replies:

In my humble opinion, if you have to mic an upright or grand same rule applies – LISTEN to it! Generally wherever it sounds best is best place to start with a mic.

Having said all that there is a world of difference between that approach than most practical situations where PA is involved and foldback coming in to play.

At my church  many years ago we used to use a Tandy [Radio Shack] flat PZM mic. These were rumored to be the rejects from the Crown PCC160 assembly line ! Anyway we fitted it inside the lid of the grand, almost central and using some [wait for it] double sided tape stuck it inside!!  We modified it so it did not need a battery and worked from phantom power. It worked well and did not sound too bad. Only trouble was it fed back when foldback was turned up. So …….. we started using a Shure SM77 [like a 57 but transformer less and slightly cleaner sound] sadly they are not made any more. We used to point one [quite low] across the strings about the middle pointing towards the high notes. On a boom stand tightened up hard so it did not droop! Then put the lid down onto the short peg [if you don’t have short peg an old hymn book is a great wedge to hold up the lid just enough for the mic stand to poke thru !!!  Sounded good with a little bass end off and some upper mid lift. So that’s a good solution with any decent cardioid, dynamic mic or condenser mic. Try it !!

Anyway on with our story …………. we then started thinking we would like to have less spill into the piano mic and more control over feedback so we went the route of a strip mic called a C-Ducer. Made here in the UK they are very good and work well. OK the piano does not sound as if it were miked up with a pair of Neumanns but the C-Ducer does the job and we just plug and play with no feedback or spill into the piano anymore from other instruments nearby. The two C-ducer strips are mounted under the 6′ grand on the frame [cannot remember where but the instructions tell you where best] and two XLRs hang down and all we do is plug in each week. JOB DONE!

If you want a much cleaner sound then a couple of very small DPA mics inside will do the job. The 4099 is great on piano [two best] but at £300 + they may be too expensive and of course with any mic cardioid or other feedback has to be taken into consideration as well as spill from other sources nearby such as guitars brass and drums

Best thing to do at end of day is experiment. Give yourself an evening, Sat morning or other time to experiment with your keys or piano players. Ask them to help you [to help them and their sound]. Take just a simple SM58 or SM57 or similar. Placed correctly and EQ’d correctly and you will be off to a good start. Listen to the instrument and place the mic. EQ it to take away a little of any problem feedback frequencies. Listen – experiment – listen.

Good sound is all about listening.