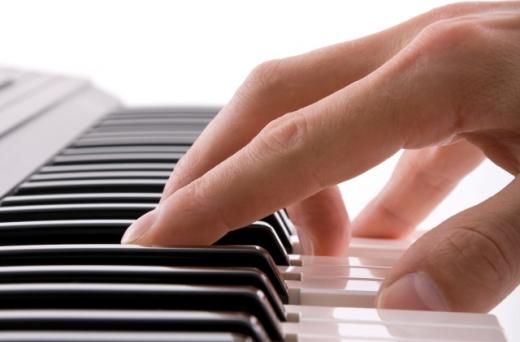 Sonia Symes from Kent in the UK emails:

“Thanks for the worship keyboard DVD course. It has truly been a great blessing!  My skills at the keyboard have been improved greatly.  One question – how do you shift between keys between songs.  For example, if I play one song in C major and the next one I want to play is in D major what should I be doing in the link time – what are all the secrets of doing this smoothly?”

There are number of ways to modulate to a new key, some which work better than others but I wouldn’t say there is a single key change method that is the definitive way. It depends on context and musicality. The main thing is to try a play a chord that is so obviously different that it warns the congregation and the band that a change is coming, so here are a few ideas to get you started.

At a most basic level many people literally end on the root of the old key, do a couple of bars on the root of the new key and off they go. This can work as long as the opening chord of the new song is the root chord of the key. If you use this method make sure you hold the new root chord either 1, 2 or 4 bars so that everyone becomes fully aware of what’s going on before you start singing. It also gives you time to pitch the song correctly.

I’ve also seen people play a major chord a semi tone or ½ step below the new key they are going into. E.g. if you are going from F to G play an F# for a bar. It’s a pretty crude solution as the third (in this instance A#) doesn’t fall into either key and so can be a bit odd. A couple of more musical ideas are:

Just before you go into the new key play the 5th chord of that new key right after or instead of the ending chord of the old key. Then go into the root chord of that new key. E.g. going from F to G, in G the fifth chord is D (G=1 Am=2 Bm=3 C=4 D=5) and contains the notes of D, F# and A. The reason why this works is that it uses something called a perfect cadence. This really means that in westernised music, the most ‘undone’ chord to our ears in the key is the 5th and the most ‘finished’ chord is the 1st or the root. Therefore to finish any song or passage going from a 5th to a 1st feels like the ultimate tension and release. So that D note gives that tension and helps ‘tune people in’ to the new key, i.e. G. The other notes help here too as the F# is the note in the key that steps up to G and the A steps down to it. So all of these notes seem like they are coming towards that G chord.

Another more jazzy alternative is to use a diminished chord a semi tone above the new key you want to go into. This can sound quite ‘out’ but does clearly pull peoples ear towards the new key when you play it. So again going from F to G play a G# diminished chord before that G and see how it sounds. If you are not familiar with diminished chords, where major chords use the 1st, 3rd and 5th notes of the scale (so for G G=1, A=2, B=3, C=4, D=5 i.e. G, B, D or 1 3 5) Diminished chords use 1st= G a flattened 3rd =Bb, and a flattened 5th = Db. So going back to our G# diminished chord you get the notes of G#, B and D (1, b3, b5). As you can see two of those diminished notes are shared with the G major chord so it feels like you pull the sound slightly above where you want to go and then back down into it.

There are lots of other ideas people use for going from key to key but these should help you get started.

Other help in this area

Check out the Playing By Ear DVDs and Downloads which are packed full of practical teaching on topics just like this.