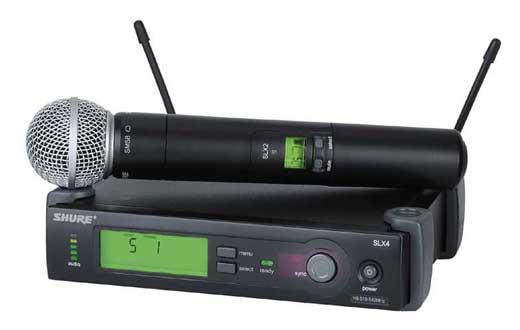 Which wireless mic is best?

“I really appreciate your website and helps, this is a great resource with which you bless the church, thank you so much.

I was wondering whether you had any guidelines or suggestions about wireless microphones for use by vocals. I have looked around at some expensive ones and some cheap ones, are the cheap ones any good?  What would be the downside of the cheap ones?

I understand also that there are some issues around frequencies and licenses and that some frequencies will be changing with digital switch over.”

The changes to the radio mic world is a HUGE topic . In the UK the Digital Switch Over (DSO) which Mark mentions happens in 2012. Essentially the whole world of radio mic frequencies is being overhauled so many of the radio mic systems in use by Churches, rental companies, bands, etc, could all become defunct…so I’ll tackle that in a future post.

With regards using radio mics for singers; to be honest it’s not worth the cost. I would always use an SM58 (or similar) per singer. The problems associated with using multiple radio mics is so chaotic and potentially expensive, I suggest you should look to stick with wired mics wherever possible.

The differences between an “expensive” radio mic and a “cheap” one are vast. For me a cheap mic costs around £150 (probably also $150), anything less than this and I would strongly recommend steering clear of it.

As with all things, you get what you pay for… The more money that is spent on radio mics the better. The key differences between “cheap” and “expensive” are:

The more money that you are spending on a product, ultimately relates to the amount of money the manufacturer has spent on the development of a product, and the cost of the parts they are using to build them. For example; the cheaper systems will often have a plastic chassis to the handheld or beltpack; these, of course, are far more prone to cracking or breaking due to use and abuse.

RF signal strength and reliability
The advantage of radio mics is that there is no cabling between mic and desk. To achieve this we need to transmit the mic’s signal over the radio waves. Generally speaking, a more “expensive” mic will be far more reliable, resulting in less opportunities for radio mic “drop-out”. If you haven’t got a radio mic that is 100% effective, is the benefit of losing the cables now negated?

Mic capsule quality
Of course a microphone, whether wired or wireless still needs to pick-up the sound of the voice singing / speaking into it. If high quality audio is critical for you, the money spent on a decent radio mic system will also include a good quality mic capsule that will effectively translate the voice from mouth to desk to listeners’ ears.

It’s interesting to look at some of the bigger churches to see what they are doing. Take Willow Creek Church, in Chicago, IL, USA; the Pastor Bill Hybels, has had so many issues with wireless mics that he fervently insists on using a wired mic! Interesting that one of the world’s most well-known churches, with large budgets for technical provision still uses wired mics where others use wireless. An interesting anecdote if nothing else…!?

For me, I would stick with the brand leaders when buying a radio mic: Shure & Sennheiser are the two names that you will find on our shelves. Audio Technica and AKG would be two other companies with some great radio mic products.

I think it best for me to conclude by posing a question: if you are spending £150 on a “cheap” mic that will need to be replaced after three years of use; after 12 years you will spend £600. Why not spend £400 on a product that will last 15 years?

3 things to improve your mix this week

Ask the expert – mic recommendations for groups of singers