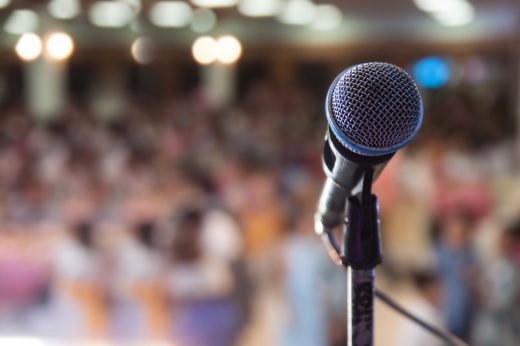 There’s lots of talk on the blogosphere about why people don’t sing in church like they used to. There are articles on every idea from song key and range to style, to music volume to congregational spiritual lethargy. But I think there’s one, large glaring elephant in the room for why people really don’t sing in church anymore. And I’d like to unpack it by describing three stories or modern day ‘parables’ if you will. So, to them who has ears, let them hear…

A few years ago I was excited about seeing Bruce Springsteen headline the Glastonbury music festival. At the start of the gig I think it was reportedly the largest crowd ever to grace the main Pyramid stage there and the excitement was palpable. But by mid set though I reckon at least a third of the crowd had disappeared. Why? Because Bruce was in the middle of a new record promotional tour and he forgot the festival crowd wasn’t his own. After very nearly two hours of “and here’s another one from the new album” he finally played something like The River or Born to Run. And guess what, when he did the crowd suddenly lit up, the sing-along volume went up by a good 500% and you know what? It was wonderful…

More recently I was a guest at a traditional Church of England wedding. Most of the other guests by and large didn’t seem to be actively religious or come from church backgrounds. Of the three hymns we sang ‘Love Divine All Loves Excelling’ pretty much had me doing a solo.  Amazing Grace was a bit better for the first 3 verses, but by the time we got to verse 6 (yes I kid you not) they’d lost the crowd and I was back in reluctant busker mode. And then, it happened. I saw the name of the final hymn and my heart just sank. Not only did it take me back to forced hymn singing in junior school assembly, but I thought the chosen song was the most twee, irritating and spiritually devoid of depth hymn to assault the musically pretentious space between my ears!

So as I rolled my eyes and sucked through my teeth when I heard the words, “let’s stand and sing hymn number 352 – All Things Bright And Beautiful” an amazing and humbling thing happened. I saw the assembled congregation light up and you could virtually see the speech bubbles above their facial expressions saying “YES!! At last!! I know this one!” They joined in, the volume went up by 500% and you know what? It was wonderful…

Then, a while back at the church I was attending at the time we had a number of young worship leaders who chose their own favourite songs, which were typically from the latest albums from their favourite worship artists (an interesting oxymoron in itself). But as is with many churches there wasn’t much cohesion or consensus from week to week on which songs we sang. So the congregation didn’t sing very much or very loudly.

Then one morning a miracle happened. The projector broke down just as we were singing two old songs, ‘Jesus Holy and Anointed One’ and ‘All Heaven Declares’ and you know what? The congregation, who like most congregations if we are honest had been Christians for at least 25 years, started singing and the volume went up by you guessed it…

So many times I’ve heard people who run church services blame the congregations lack of singing enthusiasm on the congregation themselves. Putting it down to some kind of spiritual apathy, consumerist Christianity or even assuming that there must be some kind of personal sin.

But you know what, most of the time people don’t sing the songs purely and simply because they don’t know them. Period.

More often than not it’s because the church itself has too many songs in its repertoire. If you use more than 75 songs in a year in total it’s unlikely that your congregation will know them very well. Or maybe they don’t know how to properly teach songs, which is much more than ambling through it a couple of times and hoping people will just pick it up.

More often than not though it’s because worship leaders choose songs that they like and what the congregation knows or can properly get to know is very much a secondary consideration.  So as worship leaders and worship team members, we have to step back and ask ourselves who are really making worship music for? Is it really to best help the congregation or are we really just playing songs that we like, because we like them?

Do hear clearly what I’m not saying, I’m not for a moment suggesting that we only song old songs, or don’t introduce new songs, far from it!  But I am advocating that churches take a much more pastoral overview about the amount of new songs they introduce, how the teach them and how many times they make sure they sing them to properly embed them into the congregation’s memory.

What I am suggesting is that there many great worship songs from the last four decades that are firmly lodged in people’s memory banks that with a bit of dusting down and a fresh arrangement could bring real life to many congregations. There are of course plenty of awful songs too so do pick quality over quantity. Get a good one and there’ll be an instant familiarity and a freshness that’ll cause people to sing and reconnect with lyrics they know and that have meaning to them. But surely that’s the whole point of leading worship; to help people offer prayers to God that have meaning to them, through music? Or, if we are honest is it really more about playing the songs that we like because they entertain us?

Worship songs are a bit rubbish at serving the local church

17 common worship leading mistakes and how to avoid them

Worship leaders – what do people think I do? (funny)