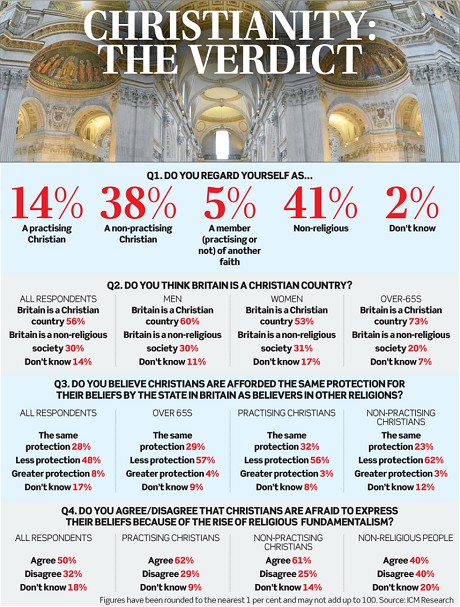 According to the former Archbishop of Canterbury, Rowan Williams, Britain is now a ‘post-Christian’ country. Despite 52% of respondents to a Telegraph poll describing themselves as either practising or non-practising Christians (see graphic below), Lord Williams says that Britain is no longer “a nation of believers” and foresees a further decline in the influence of the Church in the years ahead.

It seems that whilst considering themselves broadly “Christian” for many Brits that does not reflect in regular, if any, church going. The faith of the UK Prime Minister, David Cameron, appears similar to many Briton’s in that he describes himself as a “classic” member of the Church of England – “not that regular in attendance, and a bit vague on some of the more difficult parts of the faith”.

Despite this, David Cameron has recently caused controversy describing the UK as a Christian Country. He is on record as saying the Christians “make a difference to people’s lives and should be more evangelical about it”. These statements are made in the midst of welfare cuts resulting in thousands of people accessing foodbanks in a bid to feed themselves.

At a recent meeting of Christian leaders in Downing Street, the Prime Minister reportedly said that he as simply doing God’s work when he launched the “Big Society” initiative of volunteering and civic responsibility stating that “Jesus invented the Big Society 2,000 years ago”.

The results of the Telegraph Poll are reported here together with further remarks from the former Archbishop and other politicians.

Brits – do you agree with Rowan Williams or David Cameron on this topic?

Americans, Canadians, Aussies and beyond – where do you feel your own countries are on this identification with Christianity?