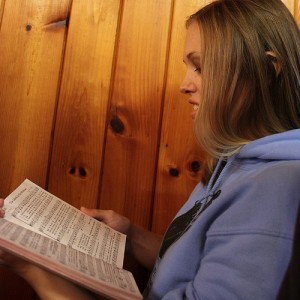 This is the sentence that I put on my Facebook page yesterday.

My non-Christian friends immediately assumed someone had hacked into my Facebook account and published it. The idea that I as a Christian would pass on such a quote was laughable to them.

The truth is the words were not mine, but that of the legendary pastor and author A.W Tozer.

The quote can be easily misunderstood. Tozer wasn’t talking about us singing lyrics such as “Jesus is alive” or “God is good”. So what was he getting at?

Although Tozer died in the 60s, many others have since written critically about some of the songs we sing in church.

Nick Page has written over 70 Christian books, including one on worship called And Now Let’s Move Into A Time of Nonsense. It’s a title I can imagine Tozer smiling at.

I met Nick recently and asked him about the book.

“With so many worship songs they do this thing I call: ‘I can’t believe it’s not the Bible’ where you think it’s scripture, but it isn’t scripture. Or they take this bit of scripture and mangle it and force it and put it on a false diet so that it will fit vaguely into the melody and they think that’s enough. That isn’t enough. If you’re going to worship you have to have your mind fed in terms of being inspired to worship.”

Keith Getty, co writer of In Christ Alone also said something similar recently: “If you look at the psalms, even the short psalms are very substantial. We have all the hymns from the beginning of the Old Testament were not written to stir ecstasy in people, they were written to remind people of the character of God and the goodness of God.”

Tozer was concerned with the truthfulness of our language, Page wants us to be scriptural and Getty wants us to avoid ecstasy for the sake of ecstasy. It seems all three of these vital pointers on worship lyrics need to be heard today more than ever.

Hundreds of worship albums are released every year. Many of them are inspiring and full of truth. Stuart Townend’s new greatest hits release is a prime example. Ben Cantelon’s Everything In Colour also has some fantastic new songs on it.

But sometimes worship songs don’t quite hit the mark, and we should be free to talk openly about this.

All this brings me neatly onto a song that has swept much of the church in recent years. It’s a powerful declaration of God’s love for us. Few could argue with the chorus, but the verses? That’s another matter entirely.

“I am a tree bending beneath the weight of his wind and mercy”.

I don’t know about you, but in the middle of that song it’s easy to get carried away in the emotion and sing pretty much whatever appears on the screen/OHP/hymnbook.

Sometimes we need to stop and have another read of the lyrics we’re singing.

Worship music : What should we sing?

Keith Getty’s Celtic Islands Tour
“I am a tree.” Seriously? Even when viewed in the context of the full verse, it’s still a difficult lyric for me to sing.

Ironically, one of the worship leaders that helped popularize How He Loves, Jesus Culture’s Kim Walker agrees we shouldn’t sing songs we don’t believe in.

Kim Walker made a small lyrical change to Delirious? Rain Down so she was able to mean the words she was singing (see here).

Worship leaders shouldn’t shy away from or be embarrassed about doing this. We have a duty to worship God in spirit and in truth.

So if you feel like a tree bending beneath God’s mercy then go ahead and sing it. But if you don’t, then why bother?

Sam Hailes writes news, features and reviews exclusively for Christian.co.uk where this article first appeared. Thanks for permission to publish.

Is it just me or are a lot of worship songs mediocre?

The feminisation of worship songs?