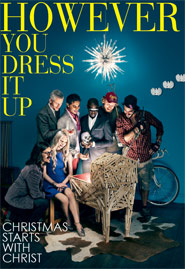 Swap gold, frankincense and myrrh with a Faberge egg, a Swarovski crystal perfume bottle and a Damien Hirst skull; swap shepherds with a cycle courier and plasterer, wise men with entrepreneurs and you have the makings of a contemporary nativity scene.

The new Christmas Starts with Christ campaign is the brainchild of ChurchAds.net and will see billboard, newspaper and radio ads across the UK during the festive season. Now in its third year, the campaign aims to re-tell the Christmas story in modern, secular contexts to capture the imagination of a general public where only 12% of adults know the facts of the Christmas story in any detail.

ChurchAds.net research shows that 85% of people agree with the statement that ‘Christmas should be called Christmas because we are still a Christian country’. Research showed 41% of people found that the message ‘Christmas Starts with Christ made them think more about the true meaning of Christmas.

The ChurchAds philosophy suggests that iIf Christians really want to keep Christmas focused on Christ, then we must constantly re-tell the story of his birth in ways which engage positively with the public’s interest. Poster ads in previous years have set the nativity in a bus shelter and featured a dramatic ‘Jesus Babyscan’. Radio ads have placed the story in a football match, horse race and pop chart countdown.

Mike Elms from ChurchAds.net said “This year we have a very simply but dramatic idea by showing the meeting of Christianity and high street consumerism, with Christ in the middle. With recent events in the UK and with millions of people heading for shopping centres in the final few days before Christmas, there will be no better time to remind people that – behind all the consumerism – Christmas starts with Christ”.

Churches are being urged to get involved by sponsoring advertisements in their locality.

P.S. Enjoyed this article? We’d love you to share it with others!

It’s the biggest way you can help us, and we really appreciate it.