Discussion with customer about our Bass Song Learner lessons 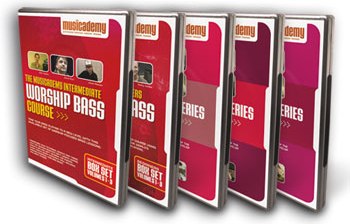 We’ve had a lengthy email conversation with a customer recently about our Bass Song Learner lessons. Andy goes into a lot of detail to address the questions and we thought it would be helpful to post it here as he covers a number of learning ideas for bass guitarists (and we think sometimes people like a bit more insight into our products).

Here is Dave’s original question (Dave’s questions and comments are in italics):

The Bass Song Learner song How Great is Our God is not introduced as thoroughly as the songs on the Bass Method 3 disc set does.  On those, they show you the guitar neck, and what notes are being played on each string- on the Song Learner vol 1 disc, all you can see is his fingers, and playing passing notes, he goes too fast to see what strings and frets he’s playing….

I’ve watched through the Song learner lessons again and although they do move just slightly more quickly than the beginners DVD lessons, Matt does audibly name each note he plays and the camera does go to a close up each time a new phrase is introduced.

The Song Learners follow on from the Beginners DVDs (what you are calling the Bass Method set) and are therefore slightly more advanced by design and so should move a little quicker. Do make sure you know your notes on the fret board, as highlighted in the beginner’s course. Matt does say each note as he plays it but if you are struggling to remember where some of the more complex notes are like the F# or C# for instance then it may well seem like the lesson is moving too quickly. In reality lots of beginning bass players skip the learning the notes part but it is vitality important if you are to progress properly.

In the Bass Learner’s DVD set, I just finished going through disc 2, and didn’t realize that the Bass Learner’s discs pick up after disc 3…  so guess I’m jumping ahead a bit!  I was sailing through the first two discs and wanted to learn more songs sooner, so put in the Learner Disc 1 to see what they were about.

The thing that I’m not as happy about on the Learner’s series (so far) is that they don’t show any images of the neck with string names and frets, like on the Bass Method discs, and it’s harder to see actually which frets Matt is putting his fingers on, plus it doesn’t show the whole neck at times, and you can’t see which frets he’s on, etc.  It’s hard to keep starting and stopping the disc, to figure things out.

We actually made a conscience choice not to put graphics on the Song Learner series as it’s that element that is probably the most time consuming and expensive element to produce of the entire project. Some people originally wanted a lower priced product so we chose to effectively make something simple that would work alongside the main DVDs. I believe the teaching is of the same quality, you just don’t get the graphics, backing tracks, worship leader interviews, quick tips etc. This why the song learners are cheaper to buy.

I am a band director and have a degree in instrumental music education, so even though I have all that, the Learner discs aren’t as “user friendly” as the method discs, in my opinion.  Suggestion for the future:  it would be very helpful to have a sheet on the website for each song, where it prints out the actual rhythms that are being played, i.e. quarter notes, eigth notes, etc. measures.  It would be more accurate to learn this way.

Point taken. There are a couple reasons why we didn’t go that way. First to be honest is cost and time. We have song learners for guitar, bass and keys and providing all the parts in standard notation will have to add to the cost somewhere and we wanted to keep the cost of the Song Learners down as much as we could. Secondly in my experience with many churches the majority of new musicians don’t actually read music and don’t have the desire to either. Even in the pro realm most contemporary guitar and bass players have learnt by a copy and play method and don’t want to read. Standard notation for electric guitar lead parts has a huge shortfall because it doesn’t explicitly say which string you should play the line on, let alone how to achieve the nuances of bends, hammer ons, pull off’s etc. which is why many guitar and bass players don’t embrace it until later in life. To cater for them with rhythms too would mean also providing a full set of tab notation, (which doesn’t give rhythm anyway) plus some kind of rhythm guide to interpret the standard notation. Some of the intermediate and advanced parts get pretty complex so scoring this out in different formats could become time consuming and not necessarily commercially viable. Do you see the difficulty in pleasing all when adding written notation to the watch, copy, listen and match the sound method we have gone for here?

So absolutely, point taken, there is much merit in adding visual standard notation but this method does do wonders for ear training, which in a world of contemporary worship music where at best you get a chord chart and at worst you have to listen and follow is one of the most important skills to learn I believe.

I would say learning the notes on the frets is very important too- and that is taking me more time to learn than anything else at this point.  I don’t have any problems with the rhythms, playing with two fingers (right hand) and coordinating that with the left hand.  So will keep on working on that-  extra lessons on scale studies could be very helpful for the future too on this area.

One other thing- it is somewhat confusing at times, trying to figure out which fingers Matt is using on which notes/frets on his left hand. You see all the fingers in the visual shots, but you can’t always tell which one he is using, on which fret.  (Maybe I’m referring to the Learner’s disc- I think it was more clear on the Method discs.)

Yeah fair point. Matt has this natural style where he often rocks his finger from one string to the next on the same fret as a method of economic finger movement. He discusses this on the intermediate DVDs. It can sometimes make it a little trickier to see which finger on which fret is being used but it hugely adds to the overall smoothness of his playing. That smoothness is one of the reasons why he’s one of the most used players for live and studio work in Christian circles in the UK. Obviously that’s not 100% always helpful for teaching and I did get him to do a number of retakes but I thought that compromise in the light the rest of what he brought to the learning was worth it.

Quick question- can you tell me how the Intermediate Method discs are put together?  Are they set up in similar fashion to the Beginners set?  I am considering ordering the Intermediate ones, but would like to know more about them first.

The intermediate is very much like the Beginners set of DVD’s. So there are lots of graphics with rhythm guides, on screen chord charts etc etc. Basically everything on screen so you don’t have to look elsewhere. It sounds like that would appeal much more to your learning style but do be careful you’ve got all the Beginner’s material thoroughly under your belt before you go ahead as its quite a challenge skill level wise.

Thanks so much for putting this series together-  I’ve looked around a lot for a Christian-driven method series and so far, like your’s the best.

Thanks. Sorry the song learners haven’t suited you yet. Hopefully going through disk 3 of the beginners will fill in some of those gaps before you return to the Song Learners.

If you’ve read to the bottom of this post – well done! If you have anything to add from your experience as a Bass player or using our DVD and Song Learner teaching please do comment.