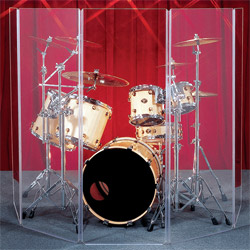 Have you ever wondered the difference is between Free Range Chickens and Cage Free Chickens? If you’ve been confused at your local grocer over this quandry, let me help you. “Free Range”, according to the USDA, means that the chicken has had access to the outside, but is not necessarily grown outside. “Cage Free”, on the other hand, is a commercial designation identifying the chicken as not being grown in a battery cage. Both designations have come about over the past few years as a direct result of the “inhumane treatment” of chickens. Which brings me to my point.

Churches with drum cages are inhumane! The plexiglass world that drummers animate themselves in should be the LAST on anyone’s list of acoustic problem solvers, yet have increasingly become the first solution that music ministers, worship leaders and pastors are much too quick to adopt.

Recently, as a listener and worshiper, I’ve personally been subjected to 3 separate and horrific drum setups. In one, the drummer was placed in a completely separate ROOM, with a large plate glass in front of him. He was isolated enough for a studio recording to take place. At another church, the drum cage had a roof on it so low that the drummer had to hunch over to get behind his drums. You couldn’t even hear him, but he was moving his arms, so I guess he was playing. And finally, the ultimate sentence to drummers, a church with TWO enclosures- both with roofs! The first cage for the drummer and the second for the poor percussionist. You could see his shaker and tambourine on a stand next to his wind chimes. His domicile was located next to where the brass section sat. I wondered what these monsters must do to deserve such treatment!

I detest these cages. I abhor them.
The presense of one of them tells me that…

1. As a drummer, I am not trusted to possess any sense of musical dynamics or sensitivity, or any reasonable disciplines of nuance.

2. I am out of control and a “rogue” on the platform, and do not know how to work with the venue, players and singers.

3. What I do is offensive to the ears of the congregation, and not necessarily a calling given to me from the Lord.

4. I am not a valued member of the worship team, nor do I need to really participate in the worship experience. They are simply placating me.

5. The PA system and house mixer are sophisticated and amazing, and I don’t need to be worried about being heard. The pristine skills of the part time mixer are well-honed and his/her ears are finely tuned instruments in themselves.

King David said to MAKE A JOYFUL NOISE and TO PRAISE HIM ON LOUD CYMBALS. Not obnoxious cymbals mind you, but loud nevertheless.

What if guitar players were told to wear a blanket over their instrument, or were forced to use a frozen dill pickle chip in lieu of a guitar pick? What if a pastor with a high-pitched or harsh voice had their microphone run through a digital device to “smooth-out” their tone? Perhaps King David’s tambourine, cymbal and drum players should have been relegated to a tent on the side of the palace. Selah.

I learned to play drums during a time when the ride cymbal had many more possible sounds than simply beating on it like a trash can lid. The cymbal had various areas and characteristics to it. A rim. A bell. The top. The edge. Underneath. Ridges. You learned about how to read a room, play with finesse and dynamics, and control yourself. You learned to provide a foundation AND COLOR the music where appropriate. I agree with Carl Albrecht’s (see Worship Musician July/August 2009 issue) call for drummers to become more versitile and flexible to their churches acoustic needs. Using “smaller venue” kits, cymbals and drums (if you have that kind of money), and building your stick bag to include brushes, mallets and hot-rods, is sound advice. You can also modify your playing to include some drums and hand percussion. In short, know how to creatively ADAPT to the situation. I’ve been in circumstances where I only used a cymbal, conga, and some hand percussion, and it all worked out great. But the immediate “fix” of acrylic panels and enclosures is a degrading solution to anyone serious about music or worship drumming as a calling.

How many churches and venues are still “Cage Free”? I suspect fewer by the day. With such a beautiful legacy of historically causing the arts to flourish, I think this time the church has adopted an egg.

“Neither do men light a candle, and put it under a bushel,
but on a candlestick; and it gives light unto all that are in the home”. (Mt. 5:15)

Post by Alex MacDougall
Alex is a veteran of the US Christian Music Business not only as a musician, but also in management, especially in marketing and A&R. This article originally featured in Christian Musician Magazine, Reprint used by permission.  Blogged at vineyardrecords.co.uk