Has anyone bought more Musicademy DVDs than this guy? We seem to be responsible for an entire houseful of instruments. 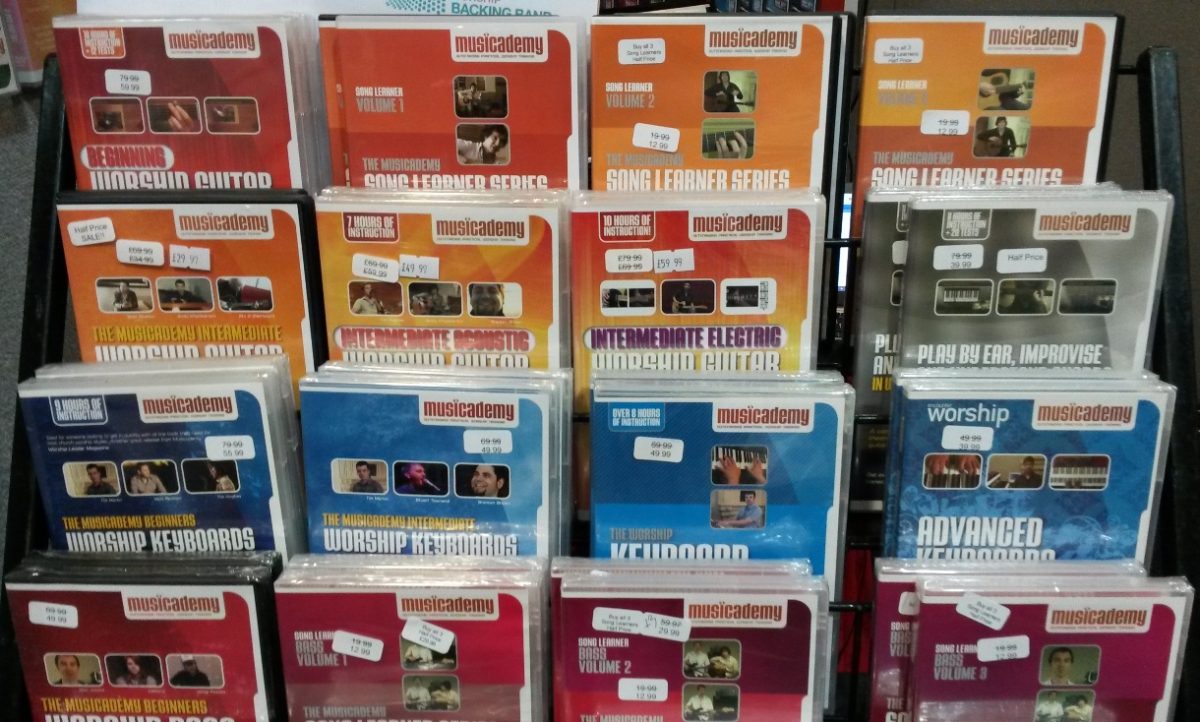 At the Musicademy office we often find that the same customer names pop up again and again on orders as well as comments to the blog and Facebook Page. One of our most regular customers is someone we’ve only known as “Chris Bracken” with a US military address. Over the years we reckon he’s purchased virtually everything we’ve ever produced. We were intrigued as to what use all these DVDs were being put to…

Well we had an email from Chris a few days ago requesting some advice on guitar pedals (covered here) and as part of the email exchange we asked Chris for a little more information. Here’s his story (with a little sub editing by us):

One family. One very big band.

I have been working with my kids (3 girls and 1 boy, homeschooled) using Musicademy materials for a couple of years and I had them play worship songs at our house from time-to-time.  They gained a great deal of competence from the musicademy materials and could play quite a few songs.  Then worshipbackingband.com came along and we, very suddenly, had the missing instruments that my kids don’t play, which rounded out the sound very nicely.

Setting up a youth band

We are at at US Navy base in Naples, Italy.  The band is formed from the membership in a chapel sponsored youth organization called Club Beyond.  Club Beyond (CB) is associated with Young Life and the CB director is a sponsored missionary to US military youth on bases around the world (see clubbeyond.org for more).  The kids have named the band:  Band Beyond (appropriate, don’t you think?)

The Navy Chaplain and the Club Beyond director had wanted to form a youth band and asked for an adult volunteer to lead.  I had played rhythm acoustic in a C&W band in college (that later went on to record an album) but didn’t have any practical band leading experience or training.  Except, I had done the Musicademy lessons with my kids and had been using Multitrack Lite and Multitrack Pro and sort of developed an opinion on blending the different instruments to make a joyful noise.  So anyway, I volunteered to lead.

Turns out there were some very talented kids that already knew how to play their instruments.  I organized and provided advice and did sound but they played wonderfully.  Three of my kids (oldest daughter off to Pensacola Christian College by now) two other homeschooled kids, a cellist and violinist and suddenly they sounded pretty good.

Using the Musicademy U-Shape set up

I had been to many churches and sometimes felt the traditional praise band setup featured one person way too much.  And sometimes that one person really enjoyed and took advantage of being ‘featured’.  I felt that took away from the worship.  When I read Andy’s post on the u-shape [there’s also a video seminar on the topic here but with poor audio]  I knew I had found the answer but with only 4 kids in our family band there were not enough to make a u-shape.  When Band Beyond formed I started using Andy’s u-shape right away so the kids would be used to it.  Guitars are usually out front but I put them back/middle and brought the keys, strings and backup singers to the front.  I thought it worked wonderfully and solved a praise and worship problem that really needed solving.  Way to go Andy!

A houseful of instruments

I wanted to try to explain how big a part Musicademy and Worship Backing Band have played in getting my kids and Band Beyond to where they are now.  My oldest daughter plays a shallow back acoustic really beautifully, my second daughter plays keys and can see a chord chart and play instantly with alot of nice fills and also plays acoustic, my son plays acoustic and electric and keys and picks stuff up on they fly and my youngest daughter plays bass (note pink bass in video) and keys and is learning acoustic (pink of course).  All taught by Musicademy.  3 years ago we had a 40 year old cheapo guitar around the house and I hadn’t played in years.  Now we have 4 acoustics (each kid has one), an electric, 3 keys (see 2 of them in video) and 1 bass and an electric violin (to be learned over the summer) and a mixer, loads of cables, mics and speakers.  Another electric is one the way.  I blame you two :)

From homeschool music to music ministry

My main goal has been to teach my kids (and now others kids) how to worship God through music.  So God gave me a vision (teach musical worship) and tools (Musicademy and Worship Backing Band) and an outlet (Band Beyond).  It’s a dinky ministry but I hope it will have an effect on the kids that they can carry forward in their lives.  I could not have done it without you guys.

We were so touched to hear Chris’ story Obviously it’s great to have positive feedback about how our years of work on producing such a broad portfolio of DVDs have been used in practice. But it’s also very encouraging to see these practical examples of how a bunch of people have been introduced to and inspired to learn instruments and then lead others.

Chris initially wrote to us asking for a detailed listing of which guitar pedals had been used on various Worship Backing Band recordings so that the Club Beyond band could replicate that. We’ll share that article in due course.