Electric Guitar Styles – the U2 Sound 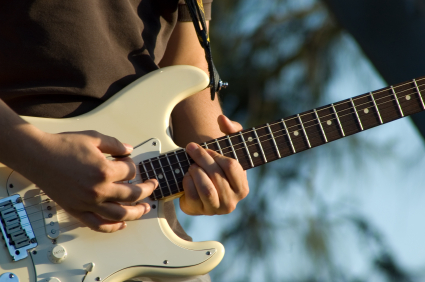 The U2 sound has always been popular in churches since the Edge’s style leans more towards rhythmic ‘pad’ sounds than a typical lead guitar rock riff. A U2 style sound is great for songs with big dynamic changes and great for filling up space behind very clear melodies in a way that is not so much a ‘lead’ part that it becomes like a distracting counter melody.

I tend to think there are three clear parts to his sound. Firstly his distinctive use of effects, second his basic guitar tone and third his choice of chord voicings. For his effects the most often recognised U2 tone is the use of crotchet triplet repeats with a delay pedal. Think ‘Pride, In the Name of Love’. This essentially means if you have a bar of 4 beats the delay pedal needs to squeeze in 6 equal repeats in every bar. It’s not as complicated as it sounds. Set your delay up for around 4 or 5 repeats until the note dies and first synch it up to the ¼ notes, i.e. every beat. Next, turn the delay speed up until the next available delay sound that seems like it synchs up. If you’ve done it right you’ll be hitting the crochet triplets which will sound like some notes hit the beat and others fall rhythmically between beats. The advantage to this is that if you play any kind of strummed rhythm it will give you some extra repeats back that help drive along the song. Just make sure you get it in time! Many delay pedals like the ubiquitous Line 6 DL4 now have this facility built in. To this you can add some compression to add attack to the tone and stop it getting muddy, particularly helpful if you play something like a Les Paul with a darker voicing. Also add a bit of overdrive but be careful not to add to much gain. Most classic rock sounds actually have less drive in the tone than you think. Lastly, a bit of chorus can add to the shimmer but again don’t overdo it or your sound will get lost in a big ‘soupy’ wash. Not nice!

For his tone the Edge uses a variety of guitars from Fenders to Gretches to Gibsons. However it’s his amp choice that really adds distinctiveness to his tone. Edge uses a combination of Vox AC30 and old Fender ‘Tweed’ Deluxe’ amps. Both of these are relatively low powered compared to your typical stadium Marshall Stack or whatever. But they both share a beauty in their clean or just breaking up voicings. The Vox being brighter and the Fender being ‘throatier’. If you haven’t got something close to one of those then again a good compressor can add a subtle shimmer to help the higher notes cut through.

Lastly for the chord voicings – it’s worth studying some tab or songbooks on how U2 songs are actually played. It will give you loads of ideas to get away from the familiar shapes in worship songs. For instance, Pride is played using four chords in B with D shaped CAGED chords up on the 12th fret. So imagine a D played on frets eleven and twelve and an A played two frets lower. Try something similar for a song like Blessed Be your Name or Open the Eyes of my Heart and see if it works. If you’re not familiar with CAGED chords we go into it a lot in the Intermediate Guitar DVDs as I consider it the most useful tool in unlocking new chord shape possibilities.

Next month we’ll be looking at mixing Reggae and Metal – Maybe! (not).

If you would find a video demonstration easier to understand, we have an online lesson showing chord formations and how to use delay for U2’s Beautiful Day

We cover electric guitar sounds in great detail in our Intermediate Electric Guitar DVDs. Check them out!