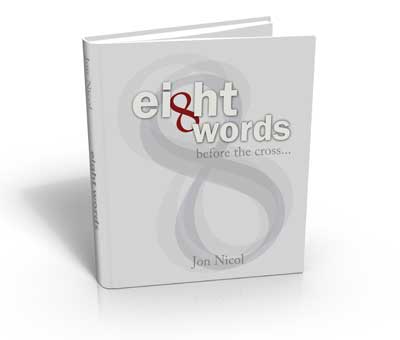 A review by Claire Musters

During the autumn of 2011 through to the early part of this year, Jon Nicols graciously wrote blogs taken from his worship team devotional ‘The Must-Haves for the Worship Musician’ for the Musicademy site. Having been suitably impressed by the content, which we used with our own worship team, I was interested to look at his short devotional ebook ‘Eight Words’, which is described as a Good Friday meditation.

Jon draws us into the story of the night before Good Friday, describing the elements of the story that each of the gospels faithfully recounts. He then stops us in our tracks by revealing a part of Peter’s subplot of betrayal that only appear in Luke’s gospel – just eight little words…

Written as a devotional for a Good Friday service this ebook can also be used as a personal devotion or small group study. It only takes 15 minutes to read through – but there is a depth and poignancy to the words that will take you a lot longer to dwell on.

Jon suggests what Jesus may have been thinking when Peter betrayed him – and then brings it back round to challenge us to ponder how he must think of us at times. He doesn’t stop there though – going on to remind us of stories in the gospels revealing Jesus’ compassion…and, ultimately, love as he hung on that cross for each one of us.

I won’t describe anymore as I don’t want the ending to lose its initial impact on you. Suffice to say I’ve never read a contemplation about the cross that has been painted in the way this one has been. I was really taken aback at how simple and yet vivid, striking and hard-hitting it is. I really could picture this being read out by a talented storyteller to a small or large group and even, as Jon suggests on his site, before communion.

We’ve 20 copies of this devotional to give away. To qualify you need to be one of the first 20 people to sign up a friend to the Musicademy newsletter. Email us at [email protected] with the name and email address of your friend (obviously make sure you get their permission first)

If you choose to download the book from worshipteamcoach.com you will receive a printable version for just $2.99 and the offer of a cheap copy license if you would like to distribute it to your church members.

Here is a link to Jon’s previous worship devotional series.