How to record drums 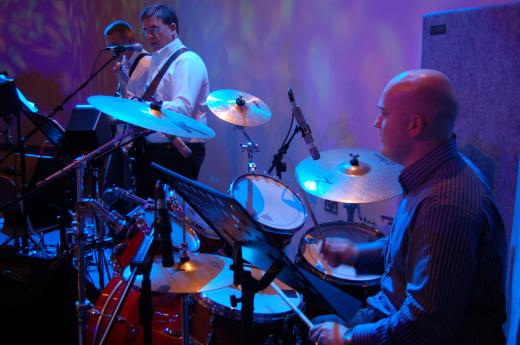 Here at Andertons Music Company we get query after query about how to record a band. My usual response would be ‘how long have you got?’. So in answer to all those questions I’ve tried to knock it down a little to some of the component parts, starting this week with drums.

Many engineers have differing approaches to mixing in terms of sonic priorities, concentrating on the vocals first and working down to the drums. I’m the other way and concentrate on getting the rhythm section right first when recording too. You know a song has to drive.

In other words, you can capture an excellent drum sound, but the performance or the drum kit quality might leave a lot to be desired. Similarly the converse could be true where the performance is inspired, but the capture dull or worse, distorted.

Remember whilst it is now commonplace to edit and chop up drum takes, not so many years ago drummers were able to do a killer take without the aid of the non destructive editing we perhaps over rely on these days? My advice would be to try and get a take with as much feel as possible and that requires little or no editing. Yes this comes down to the playing. All you can then do is make sure you capture it and capture it to the best of your ability…

Recording drums has always been an art to me, and as I’m not an artist I’m always learning and changing my opinions. During my formative years I recall reading about the mic techniques users for some of the early Beatles sessions and now renowned engineers such as Geoff Emerick being restricted from placing a mic too close to a drum for fear of damage to the diaphragm. Well a lot has changed since then and we have multiple flavours to pull out of the mic cabinet.

Glyn Johns Technique
Glyn Johns made famous a technique for recording drums using just 4 mics: the crux of the technique is the overheads where they do much of the work. The key is that these need to be measured to be exactly the same distance from the centre of the snare drum to keep accuracy (many engineers measure it in drum sticks for some reason! Two and half sticks between center point on the snare and the microphone is usually about right). Another mic typically would be placed by the bass drum and one above the snare as with the close mic technique. That’s pretty much it.

Close Mic Techniques
Moving the mic around the bass drum’s interior will offer differing tones but chances are you’re after a mixture of the ‘click’ of the beater hitting the skin and the oomph of the ‘bass’ drum. Sometimes this can be very simple – just stick in the mic around 3-4″ away from the skin and hey presto. However just sometimes you’ll not get the tone you’re after. Don’t be afraid to experiment as one of the best BD (short for bass drum) sounds I ever got was by placing a Shure SM57 sideways on the pillow being used as a dampener in the drum. It had been placed in as a joke, but the results were simply unbelievable. So serendipity and experimentation in equal measure could reveal some exciting results.

Next up is the snare drum. Again there are two main parts to this: the drum itself and the snare wire below it. The ‘snap’ if you like is the top skin and the ‘schh’ comes from the snare wire below. Many engineers mic up the top and the bottom snare to capture these two elements equally for balancing later. However do remember to phase invert the snare bottom signal as this will cancel out parts of the snare sound if missed.

Placing these mics is also a trick to get the sound you need. You don’t want to get in the way of the drummers sticks especially if they happen to be of a less precise way of playing where sticks might break your expensive condenser mic.

Your top snare mic needs to capture the stick hitting the skin while reducing spill from close by neighbours such as high-hats. Using an SM57 for starters pointing to the centre of the skin from the edge of the drum is a good starting point. Take some time to listen to the differences small movements of this mix produce. Assuming you’re working with a well tuned drum in the first place, you can hear a spectrum of tones by simple movements. This can also be further enhanced by a glittering array of microphones we have now ranging from reasonably priced condenser mics which pack a considerable punch, the standard dynamic mic fare such as the Shure SM series through to the expensive and detailed long-standing condensers. Choose your mic carefully for the tone, but also the drummers accuracy!

With the snare catered for, I’d concentrate on the next important aspect for me, the Hi-Hat. The hats are the next part in the trio. The Bass Drum, Snare and Hats are the three bits most drummers will use most of the time. High Hats are usually quite easy to record if the drummer is accomplished and the cymbals themselves are of a certain quality. Presuming this, take a microphone and place above the top hat on the side of the cymbals away from where the drummer plays them. It is common to point the mic from this side to where the sticks hit. There are a few aspects to the sound of the hats we’d like to capture. The first is the ‘tap’ odf the stick hitting the metal, and the rest is the metallic sizzle that the hats can provide. This latter bit can lead to the odd weird mic placement such as facing the gap between the two cymbals leading to a whoosh of air as the gap is opened and shut. Not a desired move! The type of mic you choose will be up to you. An electret condenser is usually my choice, but I am always too aware of the spill it can receive from the snare which after all is right next door, so sometimes careful placement is used. If the spill is too much to bear, I’ll use a dynamic mic, and one I’ve come to love for these purposes for some reason is Beyer Dynamic M201.

Next up is the ride cymbal for me. As this is the cymbal that replaced the hats and delivers the same sort of function in the drum part, I also mic it up as many do not. Again a condenser for this works well, but can be receptive to a whole heap of spill.Miking this can be tricky as with the hats, as you’ll want the stick tapping the metal as well as the rich tones the cymbal creates. The problem here is that the drummer can use the ride expressively in many ways, from whacking it to almost use as a crash (it moves a lot) to using the whole surface area to generate tones that highlight accents in the music at the bell to softer washes on the outside. I’d be choosing an electret condenser for this purpose, simply out of preference (AKG C451) or the Beyer M201 if I wanted to lock down the spill a little. Spend a little time with the ride. When captured well, it adds so much to the overall drive of a track I think.

Moving on would be the tom toms and I always take a view of starting with the high tom and working my way around however many there are until the floor tom. I’d mic each one up with some classic Senheissers MD241, or even standard SM57s as they do a really respectable job. However, if provided with the opportunity to work in a great sounding live room, then I’d be tempted to use and work with some ondensers if I felt the risk of spill was worthwhile.

Tom’s are always great to record if tuned properly. Poorly tuned toms are a great pain and as an engineer it is worth learning a bit about it, and carrying a drum key (you’d be surprised who does not!)

Miking these guys up is as simple as placing them at the top pointing in at a 30° angle or anywhere that works. Actually that’s a good motto “anything that works” as ultimately that’s what we’re after a great drum sound.
To some, the most important set of mics on the kit are the overheads. This is true to me too, but in context with the remaining bits and bobs below.

Someone once said to me when I was training that you should be able to record a kit with only the overheads and a bass drum mic (almost a variation to the aforementioned Glyn Johns technique). This makes assumptions on the size of the kit and the room its in (is it exceptional?) as the overheads hear the room too. If this is so, then it is possible, with a good kit, to get a great sound. Jon Bonham was famous for one of his solos being recorded with 1 mic suspended from the ceiling.

Overheads should be condenser mics by rights and I’ve got a habit of using a spaced pair, which to some might seem a little frowned upon for phase issues, but I like the separation and size it provides for the kit in the mix. I like too the XY Coincident pair for this duty, but whilst this priovides the phase alignment necessary, it can be difficult to erect above the drummer’s head when using large diaphragm condenser mics.

The choice of mic up here can be really important as the tone for the kit can be set. I like the AKG C414’s for this duty for their clarity and accuracy, but this can be quite unforgiving compared to those condensers with a presence peak, such as the Neumann U87 or similar. I love some of the Røde mics too, and the SE’s are really good too.

Try a load of mic placements and see what the best results provide. Take into account spill at all points as this will be a pain from time to time, especially should you need to gate them off (or strip silence) and there’s a whole heap of background noise. Have a go at some of these ideas and see what works best for you.

Written by professional recording engineer and production lecturer Russ Harvey for the Andertons Music Blog. Check out the original post How to record a Band – Drums on www.andertons.co.uk

A buyers guide to hand drums and percussion

And don’t forget to check out the Musicademy Instructional DVDs for Drums – Beginners, Intermediate and Drum Work-Out CD