In-ear monitoring for churches. Yes or No? 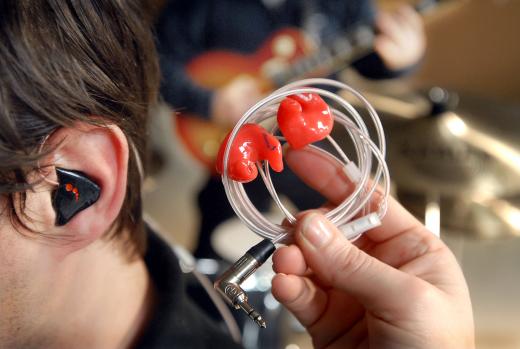 We asked a question on our Facebook page last week: In-ear monitoring. Yes or No? We got lots of for and against answers for many reasons. For me, I’ve used in-ears in a variety of settings and events with very mixed results so I wanted to throw a few thoughts into the mix.

When you switch to in-ear monitoring, each musician typically gets a wireless radio & set of in-ear headphones instead of a foldback wedge. The headphones fit so well that they effectively shield you from all outside noise and the only thing you’ll hear is the monitor mix fed to you. This can be very frustrating, particularly for worship leaders who want to hear what is going on in the congregation. Tim Martin, Music Minister at Christ Church, Clifton in Bristol (as well as Musicademy tutor) says “In the band, yes – I can hear the mix I want at the level I want. Leading worship, no. Much more important to hear the congregation in relation to the mix. For me it’s all part of the balance between professionalism and dynamic, relational leadership.”

In-ear die-hards address this by having a little of the congregation in their mix, others have one ear plugged and one ear unplugged, but either way it’s a compromise.

Michael J Peeler said “As a worship leader, I wanted them badly; moved, got them; don’t use them – want to hear congregation engaged in singing more than a steady click or specific instrument”

And Jennifer Hakala added “The consensus for our band was the instrumentalists love them vocalists don’t. Agree with Michael, we want to hear the congregation”.

Of course many churches switch to in-ears because of external pressure to reduce volume levels. That could be from the pastor, the congregation or even the sound team, especially if they prefer to mix front of house sound without any on-stage volume bleed. As Jason Mays says “For us it is mostly so that we can remove a lot of the speakers from the stage. We have a small stage and it can get pretty loud even the stage is louder than the house It would enable us to use a click track for keeping tempo as well”.

Another reason less spoken but just as real is the ‘keeping up with the Jones’ factor as Tim Brown rather neatly put it “’Because it’s what the cool kids do”. So if the current hot worship band/conference/ artist uses in-ears or that’s what they’ve got at the church down the street with the trendy worship band that’s pulling in a load of new visitors, then maybe, just maybe, if we get the same equipment we’ll sound a bit better. It seems childish but in reality a lot of gear is sold on the back of people wanting to imitate their heroes.

Whatever the reasons for going in-ear, the one crucial issue is isolation. In-ears are really designed for pro-touring environments and very large auditoriums where you need a consistent sound night after night. You’ll save your hearing too by isolating it from unwanted on-stage volume levels.

In-ears are great on a concert tour with set parts you have to nail every night over the noise of screaming fans, but if you play what I call community music then any kind of isolation kinda misses the point. Listening, intuiting, responding and flexing plays a major role in community music and if you can’t even hear your band mates shout at you through your ear plugs then you will struggle.

So by isolating musicians from their sound sources we can get rid of loud monitor wedges, amps and even hermetically seal the drummer in a cage, (it’s not all bad news!) and anyone wanting more volume can simple turn up their headphone pack.

Now this is worth considering very carefully if your church practices any element of community music in your service. I.e. if the interaction and response of your congregation genuinely makes a difference to how you lead worship then it’s vital to properly hear them!

Mitzi Barker expresses it well “I use in-ears in one ear. I like being able to isolate what I need to hear, and still be connected to the congregation. I didn’t like the “bubble” feeling I got from using both earbuds.”

Yes I know you can remove one ear bud or throw up an ambient mic in the congregation to hear them, but I’ve tried it and to me it feels like a makeshift solution and its not really what the system was designed for.

Of course not every church plays community music. If you have a high level of production in your services with set arrangements then in ears may work brilliantly for you, and the larger your gathering is, the more practically difficult it is to find a place for your congregation to contribute anyway.

The key is to be honest with yourself about where your church is right now and how much congregational contribution really happens or is even really invited in your times of worship.

Getting the mix right is essential with in-ear monitoring

Deanna Seabrook Chapman says “I don’t have everything in my monitor though. I limit it to my vocal, my piano, the worship leader’s vocal and acoustic. Everything else is loud enough in the house. I love not having to fight with other monitors to hear my own.”

For the band to properly hear themselves and each other, in-ear sound needs to be mixed really, really well. I’ve used ears in environments where even paid sound techs don’t get it right so if you have a volunteer team that struggles with achieving good front-of-house mixes you may be onto a losing battle with in-ear mixes.

You can go further and let each band member choose their own mix via a personal monitoring system from Roland, Aviom etc. The thing is, if they don’t want to hear each other they don’t have to and then cease to be a band at all! You could literally end up with a bunch of people who happen to be playing the same song at the same time and solely focussed on their own chops.

So to in-ear or not to in-ear?

In conclusion, I’m not saying don’t use in-ears at all, I am saying, a) be mindful of what you are trying to achieve and why, b) consider if your church has the technical and musical skills to get the best from the system and c) be careful that technology doesn’t become a substitute for sensitive musicianship or a barrier to playing, listening and worshipping together.

I’ve more to say on this so will return with a more in-depth article in a future post. In the meantime it would be great to hear what your experiences are. And thanks for all your comments on Facebook so far.

Benefits of IEM for Worship Bands

Drawbacks of IEM for Worship Bands

P.S. Enjoyed this article? We’d love you to share it with others!

It’s the biggest way you can help us, and we really appreciate it.