Is your guitar too loud?

If your guitar is too loud for worship what can you do to turn it down and maintain great tone? 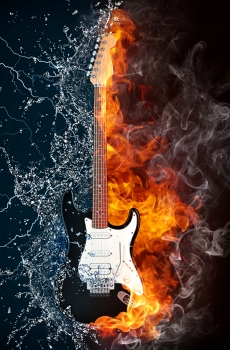 I recently had a conversation with a pastor about stage volume levels in his church and more specifically about the electric guitar player being too loud on stage (I wasn’t the guitarist in question btw!) . His issue was “the guitar itself has a volume pot, why can’t they just turn that down?”

The solution to this typical scenario is a bit more complex than simply adjusting the volume pot and in the real world requires a bit of understanding, work, investment and compromise by guitarist, band, sound technicians and pastor, so for anyone who’s ever asked that question here are some reasons why and practical solutions.

Guitar volume pots are different to a lot of audio gear. The electric guitar was designed around 1940s technology and to be honest hasn’t generally moved much such since. Partly because we guitarists can be a bit of a die hard traditionalist bunch but mostly because many attempts to update classic guitars and amps have altered the overall tones available. Its those tones on classic records that not only make electric guitar music what it is, but what serious guitarists spend a fortune and lifetime trying to recreate with their own recipe of axes, amps and pedals.

Guitar volume pots are essentially quite inefficient. Pickups sound their clearest when there’s no volume or tone pot at all to get in the way as they add a level of resistance. So pickups are really designed to run at full tilt. The more you turn the volume (or gain as it really is) down, the more it actually dulls the sound and takes off the treble frequencies that allow the guitar to cut through the mix. Some guitarists who use a lot of overdrive actually use this inefficiency to control their overall drive levels but it generally means that whilst your distorted tone is good, your clean sound doesn’t really cut through and is a bit of an afterthought. This obviously isn’t great for worship environments where clean sounds are regularly used. Conversely trying to get a decent overdriven tone with your guitar volume at low levels is very hard because the basic gain level you have to work with just isn’t enough.

This is why weaker guitar pickups sound good clean but a bit thin when distorted and in much more powerful pickups the driven tone is rich and harmonic but the clean tone can be a bit harsh. So whilst the guitar volume pot does need to be up full I suspect the real problem is not with that at all. It’s probably the choice of amp and its positioning relative to the player, the band and the front of house mix.

The role the amp plays in high volume levels

Most players prefer tube amps. Tube amps are again based on 40’s technology and are different to transistor amps in that as the tubes get hot the sound dramatically improves. With transistor amps the tone stays linear regardless of volume but their overall tone can’t equal tubes to get those classic guitar sounds. This is why many studios leave the amps running for a few hours before a session to get the best possible tone.

But here lies the problem, most classic tube amps are designed to be run at volumes way above levels that most churches need. The most popular Fender amps ever are the 40 watt Hot Rod Deluxe and the 60 watt Hot Rod Deville. Many churches have these but in reality unless your church plays LOUD, they are way too powerful for this environment and just sound lacklustre when set to the required volume, generally around 1! So option one would be to get a far less powerful tube amp. Something under 15 watts should suffice. Lots of companies are bringing these out now. In fact I use a 1×12, 8 watt amp based on an old Fender champ circuit.

Also work on amp positioning. Keep it on the floor but if it can be slightly angled up towards his face then that will help. Try to angle it towards louder instruments that need to hear it like the drums and away from acoustic non amplified instruments like backing vocals. More importantly make sure the guitarist isn’t standing right next to their amp. Speakers are designed to throw out sound and they’ll get a much better idea of its true tone and volume if they’re at least 6 feet away. You may find that alone helps them hear themselves better and even turn down!

Lastly as long as stage levels don’t overpower the rest of the band don’t be afraid if the guitar amp volume contributes to the overall front of house sound. Some technicians love an absolutely silent stage so they can completely control the FOH levels. Live P.A mixing is always a bit of a compromise and its not necessarily bad practice if some of the instruments levels are coming from their own acoustic or amplified properties. As long as they can self mix and learn to blend with the overall dynamics its ok if they are not in the house mix; bass being a classic example. So maybe get them to stand off stage in a rehearsal (with a very long lead!) and try to work together on where, when and how much the guitar should feature in the mix. Self mixing is a skill we can all develop and a big step towards musical maturity.

Have you struggled with volume issues in your church? How have you handled it?

Flow chart – Do you have too many guitars?