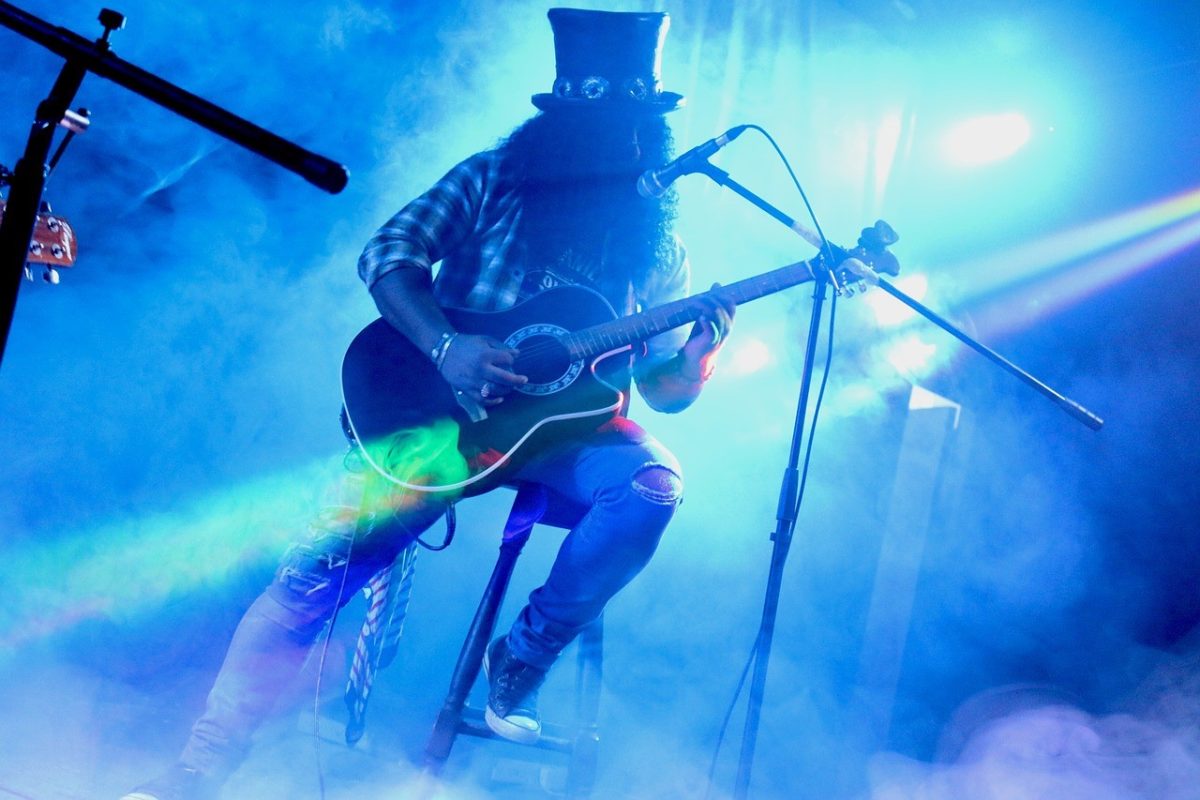 A quick word about slash chords. Well, a word about slash chords. Or two. Having spent a dozen years in the musical wilderness, the thought of “Slash” chords filled me with rock ‘n’ roll anticipation: Yeehah! There was I expecting free Les Paul gold-tops, a “marlie” tech who’d rush on in between songs stuffing Marlborough cigarettes twixt my lips and sparking them up, (as I’d seen in Guns N Roses concert footage!), not to mention the tour bus, groupies and a heroin addiction. Wowzers! Imagine my disappointment, if you will, when I was informed that “Slash” chords were in fact “slash” chords and had no relation to Stoke-on-Trent’s finest (True. Google it).

In my day we called them inversions. A C/E is, as I’m sure you know, a C Major with an E bass, a C/G, a C major with a G bass, or, as they call them in my music room at home (the truly wonderful thing about the music room in our house, henceforth known as MY music room, is that once ensconced in it, a magical force takes over that results in me never, and I mean NEVER, being wrong. It’s quite astonishing really. To be fair, that in a large part is due to the fact that hardly anyone ever joins me in there. I’m led to believe by those with whom I share my home, that it’s because I refuse to accept that I’m ever wrong when I’m in there! You win some, you lose some). Where was I? Oh yes, they are known as 1st and 2nd inversions: the former is where the third of the triad is the lowest note, and the latter, where the fifth is the lowest note. As our American cousins say, “If it ain’t broke, don’t fix it!” (curiously coined by a chap that went around illegally “fixing” unbroken banks with a number of equally corrupt acquaintances). What is the point in re-inventing the wheel? The world was managing perfectly well with inversions so why rename them? Particularly when it involves disappointing an innocent passer-by such as my good self?

In all honesty, my stress levels were so high when I first began to attend Worship Team rehearsals, it didn’t even dawn on me that “slash” chords were actually inversions. I was too anxious to remember that E was in fact the 3rd degree of C major and therefore sticking it at the bottom of the pile constituted a good old fashioned inversion. I mainly remember spending most of time fending off requests to turn my amp up so that it was audible to whichever Worship Leader was on that week.

Whilst we’re on the subject of capos. I know, but I’m making this up as I’m going along (in case you hadn’t noticed). Perhaps one of the clearest examples of the Devil being at work is the aforementioned capo. Despite owning about 6 of the things – which I’ll explain later – I never use them. Can’t abide them. Not in principle or anything as crass as that, I just can’t use them. Or to be a tad more specific, I can’t use them properly. I’m led to believe by those of my chums who do use them, that they’re a very useful device for transposing guitars (upwards), but they always give the impression that they’re function is to transpose every string equally. Aah, that makes sense! The problem is, all of my capos are broken! If I stick one on, say, the 1st fret, each string will be transposed somewhere between 1 semitone and 1 semitone and an iddybiddy bit. And interestingly enough, the iddybiddy bit is exactly the most annoying amount of just a bit too much than you can get. Usually I end up with 3 in tune strings and 3 that appear to have almost miraculously managed to take on a life of their own and pitch themselves somewhere horrible. No, not horrible, annoying! With capo on, no amount of sophisticated, minor adjustments will make a blind bit of difference to the fact that the guitar sounds AWFUL! There is only one solution to the problem – remove the capo! Then put it in a little draw in MY music room, along with the other 5, and leave it there!

I tell you what, I’m feeling a little light headed now. I might have to go and have a little lie down in a tall, dark room!

Substitute chords in B