At last I’ve found it! (See blog post on my search for a lightweight Les Paul) They say the good stuff isn’t cheap and they are not wrong! But I think I’ve finally found what I’m looking for. Hah! U2 have at last been proved wrong! (In guitar speak this means until I think of something else I’d like instead.) 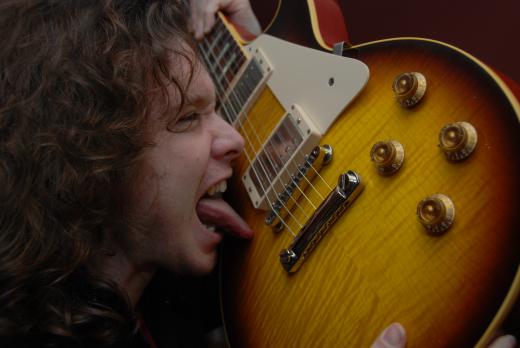 It’s used but a 2008 Chambered Les Paul in Tobacco sunburst which is a nice classic colour that will age well. Because it’s chambered or hollowed out it only weighs 7.8 pounds which in Gibson land is anorexic. It has a great tone with a touch of 335 semi sound about it, so not too honky for worship stuff, low frets so it doesn’t pull sharp with a Capo AND it even stays in tune, which none of my other Les Paul’s did. It’s also had a PLEK setup which means that Gibson strap it to a computer that sets it up for optimum playability and intonation. And I must say it certainly feels and sounds great all the way up the neck. If you are in the UK I think Chandlers in Kew have a PLEK machine and whilst it’s not cheap it’s GREAT to be in tune.

Chambered Les Paul’s really aren’t cheap but I hear that Gibson have stopped making them so at least they will hold their value and maybe even increase as the years role on. This, interestingly, is actually a genuine and serious incentive to invest in a decent high end guitar. If you choose wisely you really should get an appreciating asset. Men, tell your wives!

So in conclusion we have a really nice light Gibson SG 61 reissue in cherry red with hard case for sale along with various other Tele’s, Strats, PRS’s and kidneys from the Chamberlain collection. Drop me a line if you wanna buy a well loved guitar that sounds just as good as a custom shop Les Paul. Honest!