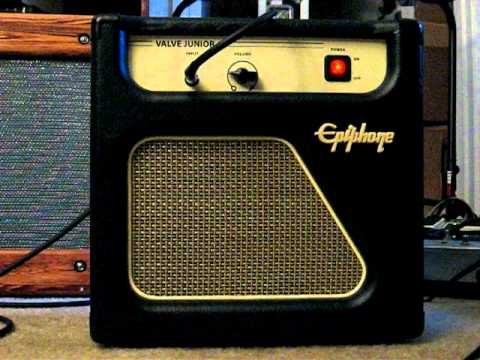 For a while now I’ve been banging on about the virtues of using small, light tube amps for church worship band duties (see “Small amp great sound” links at the bottom of this post). The main benefit apart from the size and weight advantage is the ability to turn it up to optimum volume and find that sweet spot where the difference between clean and dirty sounds can become very touch sensitive and the amp seems to ‘bloom’. So for various past articles I’ve been extolling a number of 5-10 watt combos.

This does assume certain things though. First is that your church plays the type of music that reigns in the CCLI charts right now, i.e. Tomlin, Hillsong, Redman-esque rock/pop guitar driven stuff where you want a bit of grit and distortion. If your church plays gospel-esque clean funky type stuff, you’ll need higher wattage for more clean head room so please avert your eyes right now lest you be tempted.

Second it assumes that you probably can’t play that loud in case old aunt Doris in the front row will maim you with one of her Gaither CD’s. So realistically turning your Fender Hot Rod Deville up to 6 is not an option. So again, if you play in a mega church, meet in a stadium or have a ministry to the deaf, this article probably won’t be of much help to you.

And third it assumes that part of the reason you need to turn down is that you will be miked (miced, micc’ed?) up through the PA system and the sound tech person wants to keep the on stage volume levels as quiet as possible. If your amp is your only sound source and you need to blend with the PA then again you’ll need something a bit more powerful than some of the suggestions here.

Now we have been through some of the super tiny combos before but sometimes these are coupled with tiny and not so great speakers. The Fender 5F1 Champ circuit being a classic case in point. Great, simple amp but it traditionally comes with an 8 inch speaker which for me just sounds a bit boxy in a live situation. So another solution is to look at one of the many teeny-tiny mini tube heads available from all sorts of amp manufacturers and pair it with a decent speaker cab of your choice.

After a small amount of research, which I assured Marie was work related and not at all in any way connected with surfing Ebay for more guitar stuff, I have selflessly put together a list of small heads that I think would make great church amps. I’ve listed them in roughly descending price order (low to high) but this will vary according to which continent you live on and where the amp is made. But generally speaking, if you live in America your amp will be much less expensive than if you live in England unless the amp is made in the UK (I.e. Marshall).

As ever I’m sure there are other options so do add your amp suggestions, but please do stick to the brief – small, light, low watt tube amp head.

This is a great 5 watt little cheapie and has sold by the truck load. Plus, it spawned an entire cottage industry of mods to upgrade the components to improve the tone for not a lot of cash. Well worth a look as a starting point

Another 5 watter built to compete with the (very similar) Epi Valve Junior. There’s a 15 watt version too and another load of mods available to keep you tweaking if desired.

Lots of people have bought these recently and they are getting great reviews. This time a 2 channel amp with adjustable voicings and more features than the first two but still at an excellent price.

Massive bargain if you live in the UK for a handmade single channel head. Very simple so you drive it with pedals but great quality and price.

This started the mass produced ‘lunchbox’ metal cage style amps. Switches between 7 and 15 watts which is a good thing because 15 may actually be too loudie for many churches. Just check if you like the basic clean tone though, as I’ve found many of the amps here are voiced mainly for overdrive and sweet cleans can be a bit of an afterthought.

Similar 7.5/15 watt switchable head to the Orange but with more of a Voxish and sweeter clean voicing. Its good, but don’t expect it to be exactly the same if you are trying to nail the quintessential AC30 tones at low volume.

This is a similar size to the Night Train and Tiny Terror but actually goes from 15-30 watts so will be pretty much overkill for a lot of church worship teams. I’ve never played through one but I suspect it leans more towards the dirty side of things too. That said if you need the headroom for louder gigs as well it might be worth a look.

I’ve only just seen these and I don’t know much about them except they are 15 watts, very well priced for an American made head and look to be based around a Fender 5e3 ‘tweed’ type circuit, which is no bad thing. And they look cool – which is a very good thing, but of course we’re not interested in that are we?

These are flexible heads with variable wattage (1-20) and the ability to blend between the el84 (Marshally) and 6V6 (Fendery) output tubes. Great reviews and well worth a test drive.

These are amazing value for a US hand wired amp. Very simple design, the basic one doesn’t even have a tone control but 1st class tone all around. I actually bought the 8 watt 5F1 Champster chassis and mounted it inside an existing cab but Jim the owner and builder (nice guy and a Christian too) has a little lunchbox type head cage that he can build it into as well.

Again these guys hand build in the US for not a not of cash. They do a 10 watt Fender champ style circuit but with the ability to swap to larger tubes for more advanced tone shaping options as well as a 15 watt Vox style unit. All available as lunchbox style heads.

Not very well known and I discovered them by chance on the web but again very well priced for a US built hand wired head with some very clever tube blending options. Plus they have some of the coolest aesthetics I’ve seen in a while.

A British hand builder that used to be Orange before they split in the 70s. Nevertheless they’ve had a resurgence in the last few years and offer great value for anyone looking for a hand made unit that they can tailor to your needs.

If you really want a Vox sound, buy a real Vox! These are hand wired but in China and just about scrape into this category because they have a ½ power switch. So again if you turn them up to how they are meant to sound, it’s still too loud for church but when you do, you’ll be blown away! I tried a friend’s one, and I was!

A US builder of note. They do the 5 watt Mini Z in a head or combo which even goes down to 1 watt with the built in attenuator, so it’s not designed for much clean headroom. If you want more you’ll need to go up to the Carmen Ghia or the (very Voxy) Prescription Jr. Both are 18 watts and fabulous tone but probably still a bit loud for many church settings.

One of the first lunchbox style heads with a built in attenuator, the ability to change to any output tube for different tones and roughly 4-12 watts depending on which tube you use. I bought one of these when they came out 8 or 9 years ago and it’s always given me great tones regardless of how I tweak it.

Again another one I paid my own money for. 18 watts, 14lbs and tiny dimensions with master volume, reverb, tremolo, worldwide power and the footswitch can power over a dozen pedals! Some very cool ideas here.

Another new one. Looks very interesting with lots of switchable features and voicings + an excellent travel bag too. Worth checking out if you have the cash.

If you want top drawer hand built US made quality and tones, this “more Voxy than a Vox” head is the place to go. Reassuringly expensive of course, but you get what you pay for!