Recently a guitar student asked me to teach them a cover version of Katy Perry’s California Gurls by YouTube boywonder Alex Goot. This kid is one of the many internet viral sensations building a readymade fan base poised for when they come to release their own music by covering other people’s songs and filming themselves playing every instrument. All you need for instant viral pop success is a video camera, some editing skills and a huge bucket load of talent…

But what really caught my eye were the chord voicings he used as he’d transposed the song into the key of E. The shapes themselves aren’t completely new to many experienced players but worked brilliantly together for the song and are really worth learning for any acoustic guitarists regularly playing songs in E, i.e. most church worship band musicians.

The chords in the song simply rotated around E/G# A, B and C#m for the verse and chorus. These of course are extremely familiar but I find most players tend to use power chord or E shape bar chords and sythe up and down the neck with the changes. There’s nothing wrong with that of course but it does give some quite wide voicings and uses a lot of arm movement. So why not try these instead?

With these shapes you can move from one chord to the next simply adding or moving a single finger. Also, because the voicings are so close it gives a very smooth sound for E based songs. The key is to make sure you use your little finger (4) to fret the B note on the G string, your index finger (1) on fret two of the D string and your ring finger (3) does all the moving around. I would say at this point too that using these effectively gives you a bunch of chord substitutions, which is why I’ve put the real names in brackets underneath each shape, but these work beautifully over standard chords so don’t worry if the chart says play an A and you’re actually playing an Add9.

So start with the E/G# chord and work through each chord in sequence. Here your ring finger on fret four of the low E string should naturally dampen the A string anyway but to play the A chord simply remove it altogether. Next place it on fret four of the D string and move your index over to fret 2 of the A string to form the familiar B power chord. But the real trick here is rather than sliding the shape up two frets for the usual C#m voicing simply swap around your index and ring finger positions for a gorgeous sounding alternative voicing of the same chord.

Of course these are other chords in the key but you can still get to them using the same type of positioning. For instance for the E simply bar your index finger across the A & D strings at fret two and leave the lowest string open for a very rich E5 chord. Similarly with the F#m you could either play an F#5 power chord or try the shape above. The suspended sound of the B note on fret 4 of the G string is quite distinctive so make sure it’s not clashing with any notes another player might be adding. Also I haven’t mentioned the 7th chord in the key, typically formed as B/D#. It is possible but a bit of a stretch so in the real world you’re just as likely to use the B power chord within these shapes and let the bass player take care of the D#. Lastly you’ll probably find you naturally dampen the high E and B open strings as you play these shapes. That’s absolutely fine but if you want to open up the sound even more letting those ring will add even more drone and jangle, so do experiment as your finger dexterity allows.

Looking for even more teaching on chord shapes? 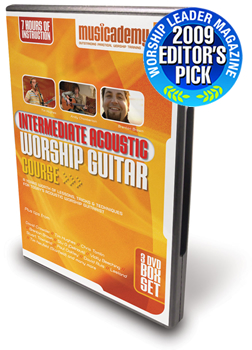 Available on DVD, as a download and also in our subscription site you will learn: