As a worship guitarist, have you ever been faced with a chord that seems impossible to play?

Imagine the situation – you’re comfortably strumming along with a typical song that goes G, C, Em, D, and then out of nowhere pops an Eb minor add 13 sus 26 half demolished. What do you do?

One helpful ‘cheat’ method around playing a chord like this is to play a ‘power’ chord instead. Power chords are really common in rock music and if you have grown up as a lead guitarist you will already be very familiar with them. However, if you mainly play regular open chords then learning about power chords can open up a whole realm of new playing possibilities for you.

The simple thing about playing power chords is that you only need to learn one chord shape. This shape is then used in different places on the guitar neck depending on which chord sound you want. The only thing that changes is the name and position of the chord, not the shape of the chord.

Yes! Just one chord shape, and you can place that one shape in loads of different positions all over the guitar neck to find whichever power chord you need. Let’s take a look at the shape described as a “G Power” otherwise known as a “G5 chord”.

Now, when you play this chord only strum the strings with your right hand that your left hand is fretting. I.e. just play strings 6, 5 and 4.

That G5 chord you are now playing will sound fine as a substitute for most major, minor or extended variants of the G chord such as Gadd9, Gm7 etc. It will also sound quite ‘rocky’ if you play it on electric guitar with a bit of distortion.

What about harder chords?

If we now want to play a power chord instead of a much harder chord such as Eb all we have to do is take the same shape but make sure we play it in a place where our first finger is on the Eb note as below. 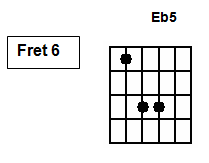 Or for a B chord it would look like this: 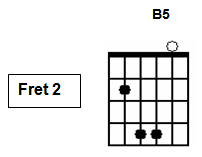 You get the idea. So to play any power chord keep the same shape and just make sure your 1st finger lines up with the correct bass note on string 6 or 5. Be aware that this shape will not quite work for bass notes on strings 4 or 3. So try taking a look at the notes below on strings 6 and 5 and play a song you know just using power chords.

So why does this work? – the technical bit

The reason why a power chord will work instead of any major or minor chord is that a regular major chord is made up of three separate notes from the major scale – the 1st the 3rd and the 5th notes. Minor chords are also the 1st, 3rd and 5th notes but this time the 3rd is lowered by one fret or one semi tone. (See May 2005’s article on tones and semi tones) Eg a G chord is as follows

With the power chord shape each chord just uses the 1st and 5th notes and then the 1st again with the little finger. This shape misses out the 3rd note (the note which gives the chord either a major or minor sound). Therefore power chords are neither major or minor chords and so will work over either.

So for instance with your ‘Db minor add 13’ chord as long as you play a Db power chord you should be able to get away with making a sound that doesn’t clash with anyone else’s sounds providing that they are playing the right notes themselves! This also works very well in the key of E and power chords with a string 5 bass note as open strings 2 and 1, (notes B and E respectively) fall very nicely into that key and so can be played at the same time as any power chord you choose in that key. You may have already done with songs like Better is One Day, Everything that has Breath and Its Rising Up.

Have Andy teach you how to use Power Chords 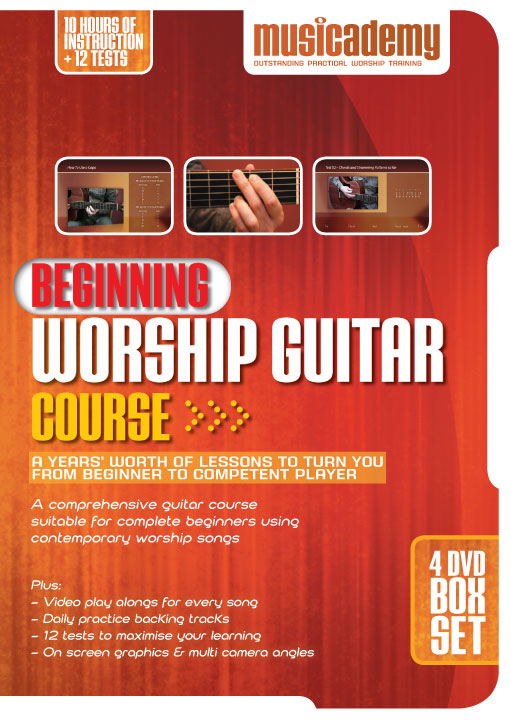 We cover all this and more in our Beginning Guitar Course. Click below to access the lessons: