Worship software evaluation. We compare some of the great but less well known options.

Worship software evaluation: SongSelect, OnSong, ZionWorx and Power Music – what do they do and which is best?

Names like SongSelect, OnSong, ZionWorx and Power Music may mean nothing to you at all….but if you’re the person in charge of song projection or leading worship in your church you may have heard about them. You may even be wondering if one or more of them could be the answer to your worship-leading prayers!

But what’s the difference between these software programmes?  And could they meet your needs?

Inspired by an article written by CCLI’s resident worship leader, Chris Williams, which focussed on some of the less well known programmes that have the benefit of integrating with CCLI’s Song Select tool we’ve re-worked and expanded Chris’ article here with CCLI’s kind permission. You can read the original article on the CCLI website.

Survey data shows that in the UK (excluding Powerpoint), SongPro and EasyWorship are the most popular programmes. In the US we find EasyWorship, Pro Presenter and, a little way behind, MediaShout. But we’d like to introduce you to a couple of others that we really rate (see the second half of the article below where we’ve gone into a lot of detail on Power Music and ZionWorx which integrate our chord charts and backing tracks.

There are two basic sets of software to compare. The first looks at resources for managing music and chord charts for our musicians. The second looks at lyric projection software. Now of course most software also does a lot more than these two basic components but it is probably quite helpful to segment them into those two basic camps.

Song library resources such as CCLI’s SongSelect are typically websites from which you can download or obtain the sheet music or lyrics that you wish to project or sing, or in the case of musicians, play. SongSelect draws from multiple publishers and songwriters worldwide to create a huge database of worship song resources. Users can download the lyrics, chord sheets and lead sheets and then add the lyrics into their presentation software, share the music files electronically, or print them out for the musicians to play from.

Provided you have permission, or the appropriate copyright licence, you can type out the lyrics of a hymn or worship song from a hymn book or music publication, but do ensure you take them from an authorised source if you obtain them online. Authorised sources tend to be those you pay for! Chord symbols don’t count as musical notation so you can, once you have the lyrics, work out the chords and add them to each song.  This all takes time which is why many musicians turn to song management software.

We’re big fans of SongSelect here at Musicademy and consider it a worthwhile investment each year for any worship team. See below to get a 15% introductory discount. The ability to change key on the chord charts and lead sheets is particularly useful. Plus you know that the charts are from a legal source that has paid it’s dues to the song writers and publishers – which is more than can be said for the majority of free charts you find online. SongSelect is undergoing a refresh in the coming months which will see a fresh new look, a fully responsive (mobile friendly) site that will also work on iOS devices.

There’s a growing trend for musicians to obtain their sheet music in a digital format from an online song library or directly from music publisher websites. Song management software stores and distributes these copies to the other musicians in the team for display using a tablet computer or other electronic display system.

A popular example of this is OnSong, which is designed primarily for musicians creating a set list of songs in the key of their choice for distribution to other band members. OnSong, which can integrate with SongSelect, is essentially a chord sheet management system. It is very effective for a worship leader wishing to maintain song lists, or those wishing to transpose or add songs on the fly. OnSong only works on iOS based Apple products and other band members wishing to use these chord sheets will also require a copy of OnSong. However, there are other song management resources available to suit various needs. 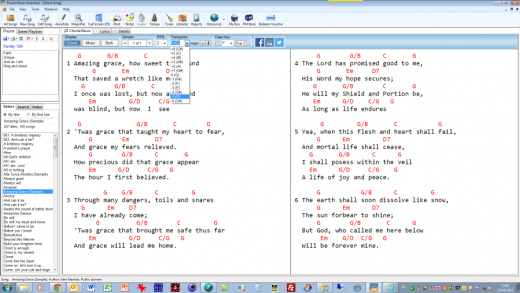 Power Music from Cambron Software is a similar system for those wishing to display the words and music to their musicians via multiple screens. Like OnSong you can import chord sheet PDFs which can then be transposed to the most suitable key. Unlike OnSong, a single copy of Power Music can display the music on multiple screens and versions are available for PC, Mac and iOS based computers/devices.

Not only can the software display on multiple screens for band setups, all versions can display multiple pages per screen.  You can even display the score and chord sheet side by side!

What is unique about Power Music is that all the editions can share songs via a private account on Power Music Box https://powermusicbox.com, Power Music’s online storage service. This means that you can import from PDF or scan directly into the software on your PC or Mac, add your chord sheets and lyrics and then transfer to your iPad for performance.

Click through via this link and you’ll get an extra 5% discount on your purchase.

So that’s the band sorted, but how does the congregation see the words?

Computer projection is now commonplace in churches. The question is, what is the most effective way of storing and projecting song lyrics onto to a screen? While Microsoft’s PowerPoint software can do this, there are other purpose-built options that may be easier to use and provide greater flexibility.

Various companies now produce worship song presentation software as a means of archiving multiple hymns and songs ready for projection. There are many systems available, and packages such as ProPresenter, Media Shout and ZionWorx even integrate with SongSelect’s song library. These programmes don’t negate the need for a Church Copyright Licence (CCL) from CCLI.  The confusion comes because the software usually requires a licence from the software developer to make the programme work. However, this is not a licence to reproduce the songs in paper form or project them during your services. You can find out more about SongSelect integration here.

We at Musicademy really like ZionWorx and in fact we’ve worked with them to integrate our Worship Backing Band Split Tracks to their interface. The other projection software packages are comprehensively reviewed online elsewhere so for this article we will focus on ZionWorx and how it compares with a couple of the main alternatives.

ZionWorx is high-quality, affordable church presentation software that does its job with no fuss. Feature-rich yet very easy-to-use, it offers hassle-free video playback with integrated video codecs, plus support for motion backgrounds and live video inputs. It provides a unique integration with BibleGateway.com for instant access to Bible translations, as well as seamless integration with PowerPoint. Basic training takes minutes, even for non-technical operators! You can get a 30 day free trial if you want to give it a test drive.

We (Musicademy) asked ZionWorx why churches should choose them rather than the better known SongPro and EasyWorship options. It was most interesting to hear some stories about why churches had switched! See the info below:

Why choose ZionWorx over EasyWorship? 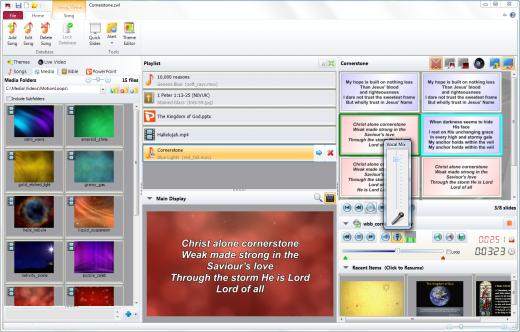 ZionWorx has been designed to work seamlessly with multimedia, and provides easy out-of-the-box compatibility with all audio, video and image formats.  It also offers a special integration with Musicademy and Worship Backing Band Split Tracks.  Split Tracks are video files which contain lyric display and our professional backing tracks, with vocals recorded in a separate stereo channel.  When uploaded to ZionWorx, the software has integrated a useful ‘vocal mix’ feature that allows the volume of the vocals to be easily adjusted or completely muted. It’s been great working with ZionWorx on this project as it has enabled a sophisticated “out of the box” experience for Split Track users with no further adjustment or inadequate media players.

You can use the Split Tracks with ZionWorx in two ways; either play them directly as videos or just use the audio as a backing track and attach this to your own more appealing visuals (perhaps using motion backgrounds etc). All this can be achieved with a few clicks and no hassle, even at short notice. 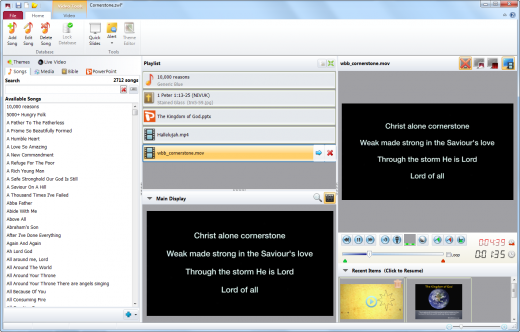 Summary positives and negatives of ZionWorx

Check out these independent customer reviews but here are our summary positives and negatives:

With so many song library, management and presentation options, it can feel a bit bewildering to get started and we’re surprised at the number of churches that are simply using Powerpoint – typing in the lyrics by hand with each new song – when there are so many more time efficient, and feature-rich alternatives.

Once you’ve chosen the right combination for your church context, these software choices will make discovering, storing and displaying songs for worship a much more efficient and enjoyable task.

There is a 15% introductory discount on all UK SongSelect subscriptions. Simply ask CCLI about it when you apply.

[Disclaimer: affiliate links are provided here for Power Music and ZionWorx. We’d strongly recommend these programmes anyway as having researched the market and worked with lots of the alternatives, they really are the best we’ve seen but feel free to Google them for affiliate-free links without the discounts.]