Church sound: The hierarchy of importance 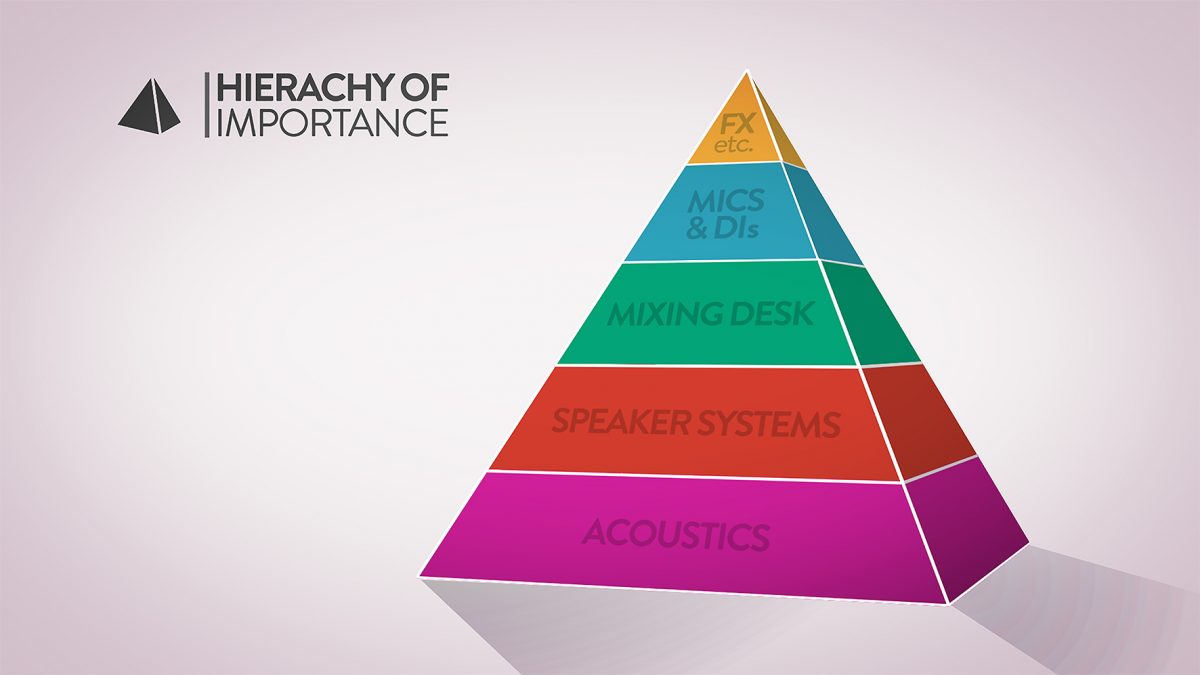 Graphic taken from the Sound Tech and PA Training for Churches DVDs.

What is the most important element in the church sound system?

One of the most common misunderstandings I encounter during discussions about sound systems is based around the concept of “the most important part of the sound system”.

This usually appears in the guise of a statement like, “If we upgrade from this microphone to this one, then it will sound better”. Or, “I want to use this particular mixing desk because it has better pre-amps”.

Of course, it is quite right to discuss the merits of mic or desk choices; certainly there are forums and videos littering the internet discussing all of this stuff. But, I would want to ask the question: what is the most critical part of the sound system?

Well, the answer is not actually a piece of equipment; it’s the venue.

Think about it; regardless of how much money I spend on speakers, microphones, cable, amplifiers or mixing desks, the venue will always affect the overall sound quality. A reverberant church building with the world’s greatest sound system will still sound reverberant!

I would like to state that the venue is the bottom layer of the pyramid; the foundation upon which the quality of audio is based. I like to term this concept “the hierarchy of importance”. From there, the different elements are built upon this foundation according to their significance.

It’s worth noting here, that unless you are undertaking a major interior redecoration of your venue, then some of the more permanent acoustic fixes are probably not possible or even affordable. But don’t underestimate what a bit of drape or other soft furnishings can do to help you fix some of the acoustic problems, even in the most basic of ways. I could go into great detail here, delving into all the complexities of acoustics, but that’s for another time…

The next step in my hierarchy is the speakers and amplifiers. Get this right, and you have won the battle already! As controversial as this statement perhaps is, I do whole-heartedly believe it; I would far rather have the best speakers my budget allows, and skimp on the desk and mics. Think about it; it doesn’t matter if you have the world’s greatest mic or the coolest desk I can lay my hands on but still run it through a cheapo speaker product – it will still sound cheap and nasty!

I should clarify what I mean by “best speakers”. To me, a great speaker is defined by three things: smooth reproduction of sound across all frequencies (no colouration of the sound, at any volume); ability to maintain headroom (ensuring the speakers are capable of the volume we require without it sounding “forced”); efficiency (reliable, not prone to failure).

The amplifier and speaker combo is also important. We want to ensure these match for the best-fit. Often, especially in world-class speaker products, speaker manufacturers produce their own amplifiers which have been specifically designed to work with their own speaker products. This ensures that the speaker sounds at it’s best, all the time, as well as protecting the speaker from destroying itself, and giving the flexibility to derive tonal changes and time-alignment settings without the need for additional processing units.

As we climb to the next layer in the pyramid, we find ourselves in the mixing desk world. More often that not, the choice of desk is defined by the needs and tastes of the engineer(s): whether he likes the sound of it; it’s the most user-friendly in a multi-user environment or simply because it was the most affordable. Whatever the justification for your choice of sound desk, it’s good to remember that the equipment is only responsible for 50% of the overall sound; it’s the person controlling it that gives it the other 50%.

The upper tiers of the pyramid can be separated into lots of micro-sections, but I always rather look at them as a whole; remembering that my choice of microphone, cable, effects unit, compressor or otherwise is only as good as the source itself and, indeed, not the most critical to the overall sound quality.

So, to conclude, my “hierarchy of importance” flows thus: venue, speakers & amps, mixing desk, everything else. Simple! Fix the venue (if you can); buy the best speakers and amps you can, then choose the most suitable desk for you, and finish it off with whatever mics, etc are appropriate for your setting.

Tim Horton is the Sales and Installations Manager at SFL Group and co-presents Musicademy’s Sound Tech and PA Training for Churches DVDs. The DVDs teach the concept of the hierarchy of importance in considerable depth along with many other Sound Tech related topics.