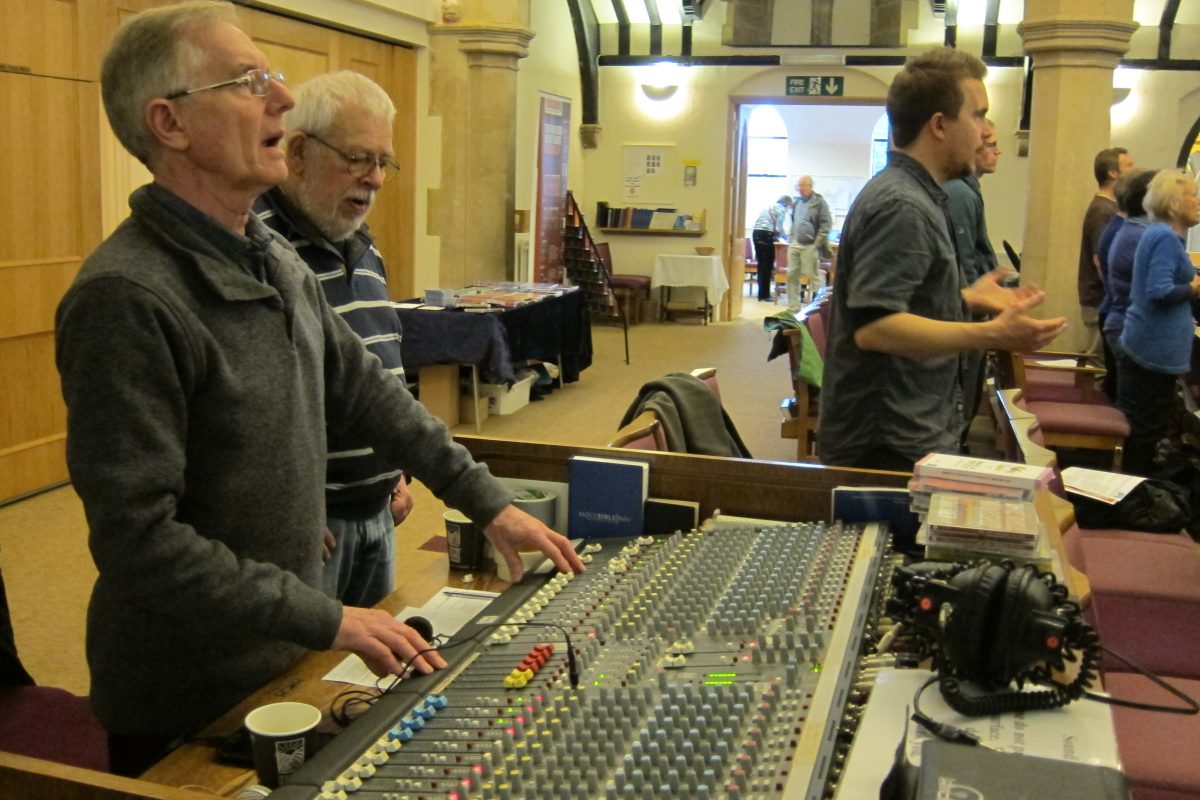 SoundMan needs love. The church sound person is almost always a volunteer. This is not his full-time gig. During the week he’s repairing cars, selling insurance, cub reporting, peddling groceries, and on Sunday he becomes something other than a car repairer, insurance seller, cub reporter or grocer. He becomes -voila!- SoundMan! No one on the worship team cares anymore that he knows a Ford carburetor from one made by Chevy, or that he can tell you about the various whole life policies and their intricacies, or that the tomatoes are particularly good today. They just want excellent sound, and SoundMan had better come to the rescue. Bet on it, Sweet Polly Purebread prefers SoundMan over Underdog when she’s at the microphone.

Assuming that no local SoundMan wants to disappoint a frightened public that depends on him, I have some thoughts- the SoundMan Code- that will help him/her (yes, there is SoundWoman) do the job better and, when necessary, fake it convincingly.

1) SoundMan does best when no one knows his secret identity. That is, no one in the auditorium should be aware that there is anyone actually running sound. The better you do your job, the more invisible you are. You must strive to be the Clark Kent of your church. If anyone (other than guys like me) comes to you after the service and says ‘nice sound!,’ you have failed. It’s like someone saying “Aren’t you Superman with glasses on?”

2) SoundMan looks like other humans but he is different. He knows he is different. He has a responsibility at all times in all circumstances to be mindful of the fragile nature of the situation so that he can spring into action to quell any disturbance before the humans are even aware of it. That is, SoundMan does not close his eyes and sink into deep worship during the service. He runs sound like Nehemiah’s men rebuilt the walls of Jerusalem- they had a sword in one hand and a tool in the other. SoundMan never takes his mind or his eyes off the stage. He remains at his post with his  hands on the mixer, always at the ready.

3) Soundman doesn’t simply wait for evil to happen and fight it. He anticipates. He prepares. He knows, according to the service plan, what should happen next and is prepared to make it go without a hitch. He knows when the pastor is going to introduce a video and has his finger on the play button ready to make a smooth segue from pastor to screen. And he has the volume adjusted so it is both ON and is at the proper level. He runs through the segue before the service to ensure that he is prepared. SoundMan is a Boy Scouts dream.

4) SoundMan knows his powers and uses them for good. He knows also what powers he does not have and does not insinuate himself into decision-making that does not involve him. SoundMan is not the worship leader. That is a job for WorshipLeaderPerson! He doesn’t need to help plan the song selection for the worship time or the topic of the sermon. He must use his powers at the console to make others look good. SoundMan cannot fix flat notes or make the bass player stop acting like a lead guitarist. He must accept the humans with all their foibles and make them sound as good as he possibly can. SoundMan’s job is to make good sound. That is all.

5) SoundMan is humble. He has an “aw, shucks” quality about him. This is because he knows a) there is a limit to his powers and b) he is not one of the humans but must be kind to them. This makes him approachable, friendly and teachable. When someone complains about the sound, he doesn’t react against them. To SoundMan this would be tantamount to kicking a small dog. Rather, he treats them kindly and accepts their comment, even when they have no idea what they’re talking about. SoundMan must be above revenge.

6) SoundMan knows how to use his equipment. When no one is looking he is studying his gear and practicing so that, when they are looking, he will not shame himself. SoundMan has read the owner’s manual for his console front to back. He knows what all the buttons and knobs do. He has read the Church Sound Survival Guide (written by this pos writer, available here) and, because of that, has a working knowledge and understanding of all things pertaining to his responsibilities. He keeps his gear in good working order.

7) SoundMan has a sidekick. He does not do everything by himself. His sidekick is an usher, a people counter, a mother-with-a-crying-baby ouster. He does not take upon himself any of the responsibilities of the church that would keep him from his first job, which is Good Sound. Even when he must communicate with his sidekick, he never takes his mind or eyes off the job. He cannot. The humans are depending on him.

8) If you are willing to slip into the outfit and become SoundMan, you must also be willing to live by the SoundMan Code and accept all the responsibilities of being a church hero. None but the brave.