The story behind the arrangements of our latest MultiTracks 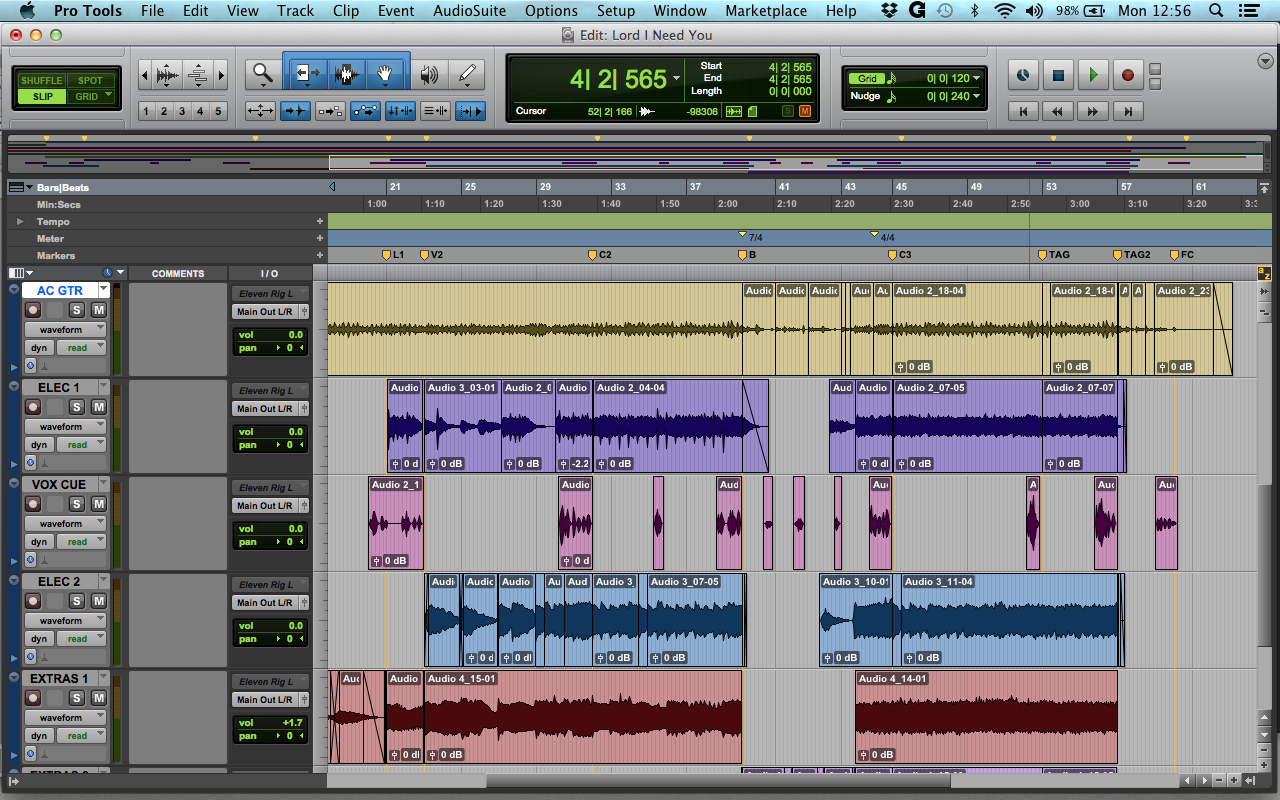 When we create our backing tracks we face the dilemma of people (thinking that they) want the song as close to the original recording as possible and actually creating a track that is actually singable in church and also practical as a backing track. Inevitably that will involve recording it in a lower key than the original, and it will often mean that we remove lengthy instrumental introductions (one of the songs in the latest batch has a 28 bar musical interlude in the original!) and interludes which don’t really work in a church situation, especially with backing tracks.

This is one of the things that distinguishes Worship Backing Band recordings from other multi tracks on the market. We put a huge effort into the singability of our recordings and actively avoid using the original when it has been produced with radio play or large arena style performances in mind.

Here’s the thinking behind our latest batch.

The main thing we had to work on in this song was the range. The song itself isn’t very rangy but in the original most of the melody notes hit around E, F# and G# which is way to high for most congregations. So we moved the key a whole two tones down to C and now they centre around C, D and E which is much more singable. We also moved a few sections to give the arrangement more usable options. The original ends with drums but we did that as a breakdown so now you can go back to a big chorus to finish or still end with the drums by using the jump function in the player.

Here we made a few congregation friendly changes. The key has come down a tone to A and we’ve shortened both the intro and the band breakdown to make the song more congregation singing focused.

Here we kept the arrangement as is but dropped a tone to A again to make it more congregationally singable.

We changed this one in a few places. Firstly in the original pre chorus there’s an extra 2 beats added which could be confusing for some worship teams so we took those out to make it more easily playable. We also shortened the intro into 4 bars, the original has 5 bridges so we took out 1 of those and finished the song by resolving it back into a gentle chorus rather than finishing on a huge bridge which we thought would be more usable for most churches. If you want to finish on the bridge you can, just use the player to skip the last chorus onto the final chord and it will synch up perfectly.

This we kept mostly the same as the original but with one 4 bar link taken out to help it to flow more and give it less instrumental breaks to keep it congregationally focussed.

Here we’ve added an intro as there wasn’t one. In the original it goes straight in with verse one. This can be part hard to pitch if you are using backing tracks so we put intro’s on everything to help the band and congregation find their way.

We also didn’t use the 28 bar instrumental in the original. Again our focus with these tracks is always trying to make our versions  the most congregationally friendly we can.

As with some of the other tracks here the most recognised version of this song is recorded live in a huge arena, which gives a great feel but very often the arrangement is too long for the average church to sing.  So we abridged the three very long bridge sections (no pun intended..) We took the key down a tone to Eb, added an intro as the original doesn’t have one and took out the slowing down section in the outro. We’ve still achieved the same feeling by using dynamics instead of retarding the timing but doing it this way allows you to jump around the song if for instance you want to repeat the soft chorus at the end or jump back into another bigger section.

For some the key of Eb might be an odd choice for guitarists out there but we felt that was the most congregationally singable key, so if that’s you put a capo on fret 3 and use our C shape EveryKey Chord Charts. It’ll be much easier to play than in E too.

Here we dropped the key a tone down to G but otherwise not many tweaks here in the arrangement, just a few changes to the link sections so it’s more useable to jump around between sections using the Worship backing Band player and slightly more congregational singable (read less instrumental moments where the congregation cant join in)

Nothing is Impossible (A) – Joth Hunt (Planet Shakers)

Here the song structure was pretty good so we’ve kept it as it is but dropped the key down a minor 3rd to A as mostly the song is just too high in too many places to be singable in the original key of C.

This is a rare song where the original arrangement works so well congregationaly, that we didn’t need to change a thing!