Acoustic guitar “cheat” chords for the key of G

This is the first of a 10-part series showing substitute chords that you can use in the given key or in another key in conjunction with a capo. These substitutes are alternative voicings to regular chords and are often used by players who want easy fingerings from one chord to the next in conjunction with open strings that smooth out the sound when moving from one chord to the next.

If you normally stick with the regular chord shapes then we strongly recommend trying these as the next stage in the development of your guitar skills. If you already know some alternative shapes then hopefully there will be a few that are new to you here, especially when we get into less familiar keys.

So let’s start in the key of G. If you are playing any song that sticks within the key then you’ll be using one of these chords. As you can see chord 1 is as normal but chord 2 instead of a regular Am, is now voiced as an Am7. You can still play this over the normal chord but is an easier transition on the fingers and because it shares open and fretted notes with other voicings in the key, provides something known as a smooth voice leading from one shape to the next. 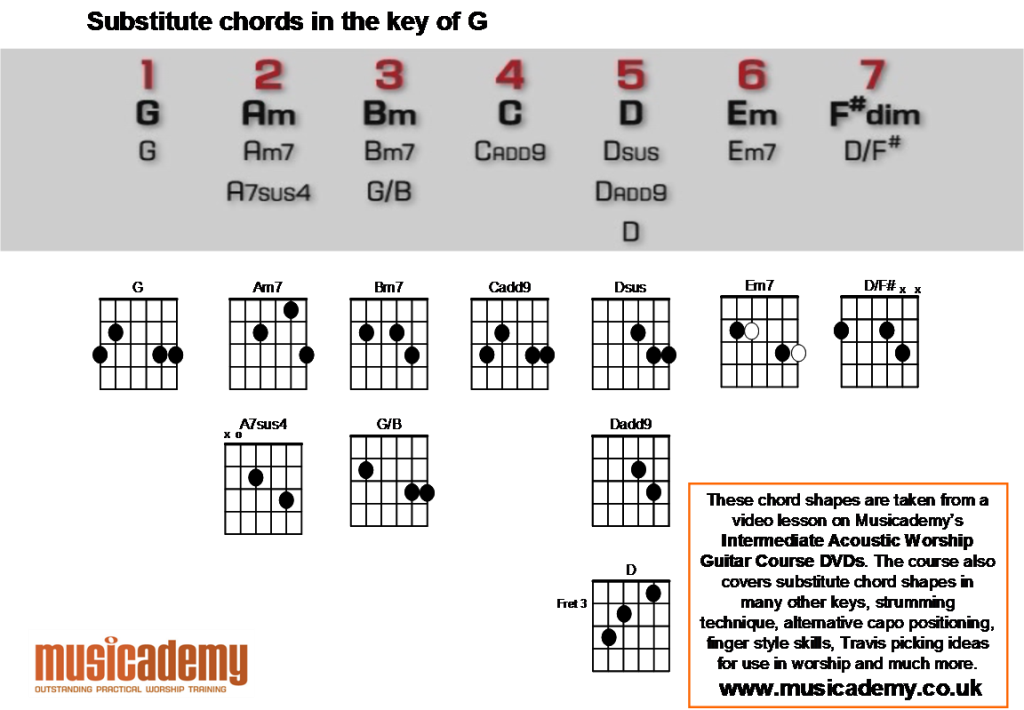 A couple of points to be aware of: in many ‘pop’ based chord progressions, songs that use the 3rd bass note, B in this key, sometimes utilise a ‘1’ chord (G) with the 3rd bass note (B) forming a G/B chord instead of the regular Bm chord for a more ‘major’ sound.

A similar thing happens in chord progression when you want to use the 7th bass note as the basis for your chord over the melody. Now, correctly this would be an F# diminished chord which sounds pretty dark and jazzy so instead a lot of songs utilise the 5th chord (D) with the 7th bass note, forming D/F# which I’m sure most of you have come across with songs in the key of G.

See links below to previous posts in this series:

Substitute chords in A

All these shapes are taken from lessons within our Acoustic Intermediate Worship Guitar Course DVDs. This particular set of substitute chords is available in this 55 minute downloadable lesson so if you want to get loads more ideas and applications for how to use these then take a look.