Substitute Chords in B

In this little mini series we’ve looked at substitute chord shapes taken from our Acoustic Intermediate worship guitar DVDs that with help you find some easy one finger changes and hopefully inspired you to you use some different voicings with different sounds.

Now let’s look at a key that most guitarists shy away from unless they have a handy capo, the key of B. B is a great congregational key to sing in and many worship leaders and song writers are picking up on this. I used to play with Matt Redman and was pretty impressed that he was playing and writing in this key (Blessed Be Your Name, You Never let Go etc) until saw him pull out his baritone guitar, just use the same old E shapes (Everything That Has Breath, Its Rising Up) and let the guitar do the transposing! I couldn’t work out if it was genius or lazy – perhaps a bit of both! 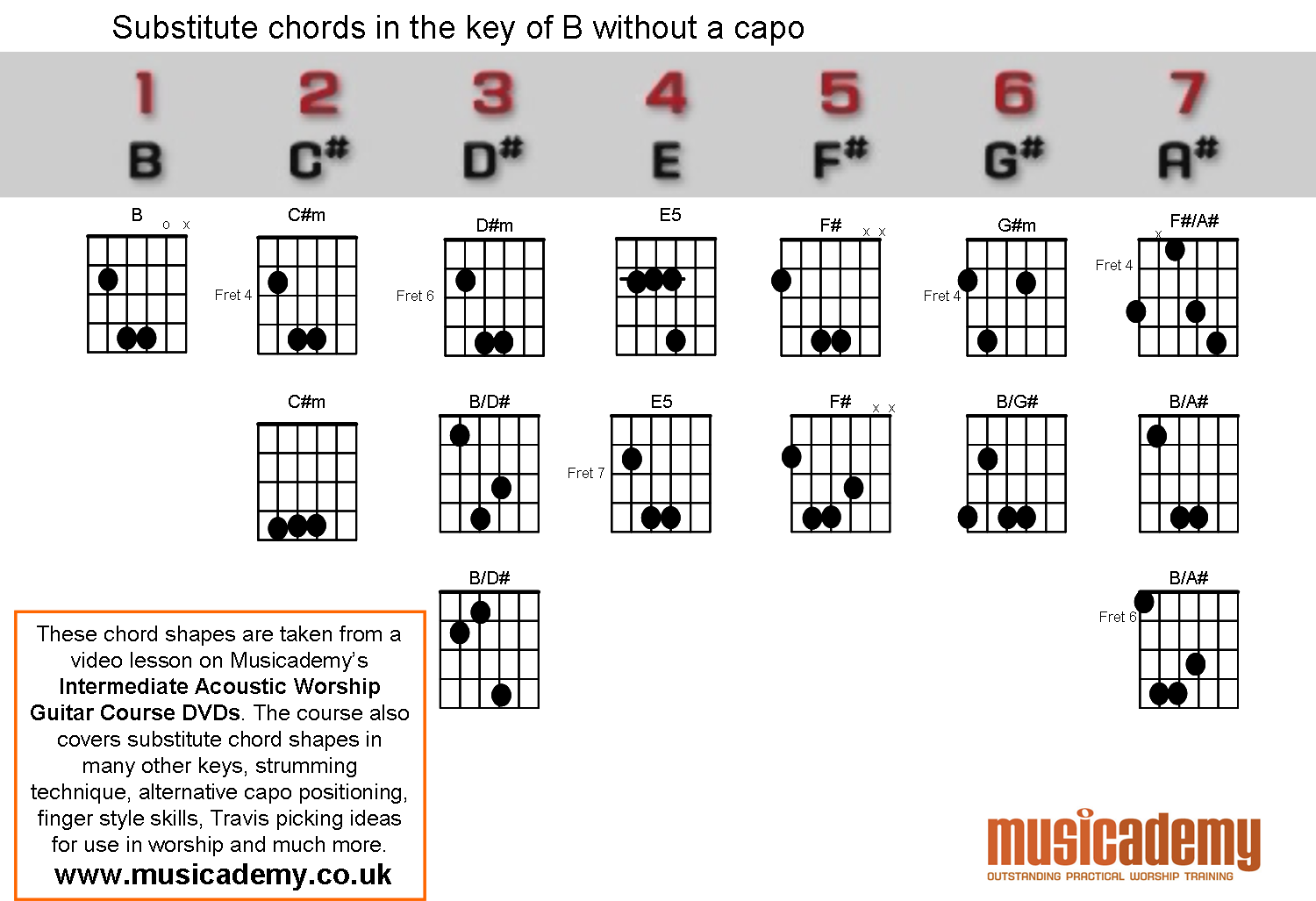 Anyway don’t just slap a capo on at fret 4 and use the usual G shapes, try these ideas for playing in B and create some new sounds. The key is to remember that even as an acoustic player we don’t have to play all the strings all the time! In fact most of these shapes don’t utilise the high B and E strings and to make this work you need to actively avoid playing them. Whilst both notes are in the key, the E is a 4th which sounds really dissonant and although you could play the open B, you stand a high chance of hitting the E which will just sound plain ugly. So what we are really doing here is focusing on the lowest four strings, which played well will give you some solid, rhythmic and bassy tones.

Also, some of these shapes do sound a bit sparse on their own, but work well in the context of a band so choose your application wisely. You’ll also see that I’ve included a 1/7 chord as well as the 5/7 as frankly, in some scenarios a 5/7 is quite hard to play but you can get away with a 1/7. (see post 1 for an explanation of this).

For more on substitute chord shapes see our Acoustic Intermediate Worship Guitar Course. Do check these DVDs out as we’ve tried to throw in as many ideas and techniques to help you expand your knowledge as a competent acoustic player.

See links below to previous posts in this series:

Substitute chords in A