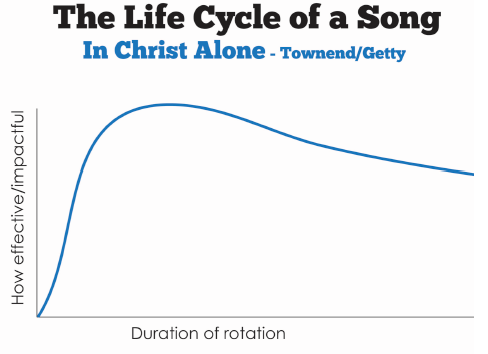 Everything has a lifecycle. You. Me. Our churches. The TV shows we watch. The brand of cereal we eat. Even the catch-phrase epic fail, which many teenager have already stopped saying, but adults are just now picking up on it (and will say for the next eleven years).

Our worship songs are no exception. They are born. They grow. They die. Or at least fade to near obscurity.

We need to pay attention to how this lifecycle progresses in our churches. It’ll be different for every church. But in every church, songs have a shelf life. We can’t let them sit too long.

Fun with Graphs and Charts

We could do fairly scientific measurement of the lifecycle of a song by using CCLI charting stats. But there are two issues. One issue: I’m too ADHD for that kind of research. But the most important issue: CCLI numbers aren’t your numbers. They take into account what a bazillion other churches are doing. Case in point: is “Lord I Lift Your Name on High” in your top 25? (As of this writing, it’s barely hanging on at #24 on the CCLI charts).

So let’s measure our songs a little less objectively, but no less helpful.

Graph #1: The lifecycle of a worship song 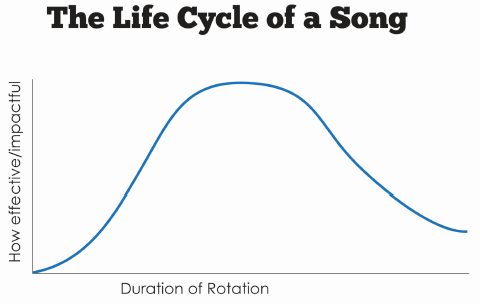 At the start, the song is not known, so it doesn’t have a significant impact. As it’s being sung more often, it becomes more impactful as people learn it. They sing the song from their heart, rather than from the words on the screen.

At some point, the song will reach an apex of how much it impacts people. From there it begins to decline – usually slowly. But after awhile, you’ll recognize that it doesn’t have the same effect. No matter how great a song is, it eventually loses some of its punch. This is the law of diminishing returns at work.

Often what helps drive the popularity of a song in the beginning – high rotation/high exposure – is the very thing that speeds its death march after it arches downward. Eventually, people will go into auto-pilot as they sing it. Or worse – they’ll be outright sick of it and tune it out.

There are things we can do to help a song move towards its highest potential impact, yet stay closer to that apex for longer.

I recently wrote a blog series called “Five (and a Half) Tips for Teaching New Songs.” If you use an intentional process like this, you’ll help a song become more familiar faster.

But once a song is learned and begins resonating with the congregation, we need to manage the rotation of that song. Too little rotation, and the song gets forgotten. Too much rotation, and people get sick of it.

For example, look at the XY graph I made for In Christ Alone (Townend/Getty). Remember, this is for my home church. Your line for the same song may look a lot different.

My church began to do this song nearly 10 years ago not long after it came out. My well-loved and uber-talented predecessor could tear this song up. And the church loved it when he did. On his last Sunday, the team played that song and he blew the roof off. Needless to say, when I arrived, they hadn’t touched the song since he left. And I wasn’t about to either.

We gave In Christ Alone a long rest. I tentatively returned it to rotation and found it still stirred people’s hearts. Thankfully, I had the smarts to leave them wanting more. I only scheduled it once every three months or so. It was well-known enough that people didn’t forget it during those gaps. So it stayed fresh.

And now I schedule even less. It’s in my “third tier” song list and will soon be heading towards the “classics” bin. (For more on that, see “What’s In Your Playlist” ebook or SongCycle webinar, both are free.)

The limited exposure through a lower rotation has helped preserve the impact of this song. Had I used a once-a-month rotation for this song, many people would have loved it. For awhile. But eventually, the line would’ve driven sharply downward as the impact diminished. It’s just too good of a song for that.

I don’t think we worship leaders need to make line graphs for our songs. But we do need to pay attention to the natural lifecycle of songs—preserving the life of the great ones and knowing when to let go when they’ve lost their impact.

Jon Nicol is a worship pastor/blogger/teacher. He makes his home in Lexington, OH with his wife, Shannon, and their three, and soon-to-be four, kids. Jon writes for Musicademy.com and WorshipMinistry.com as well as his own worship resource site, WorshipTeamCoach.com

Stuart Townend, Vicky Beeching, Noel Richards and Starfield on the use of hymns in worship – video clip

What makes a good worship song?