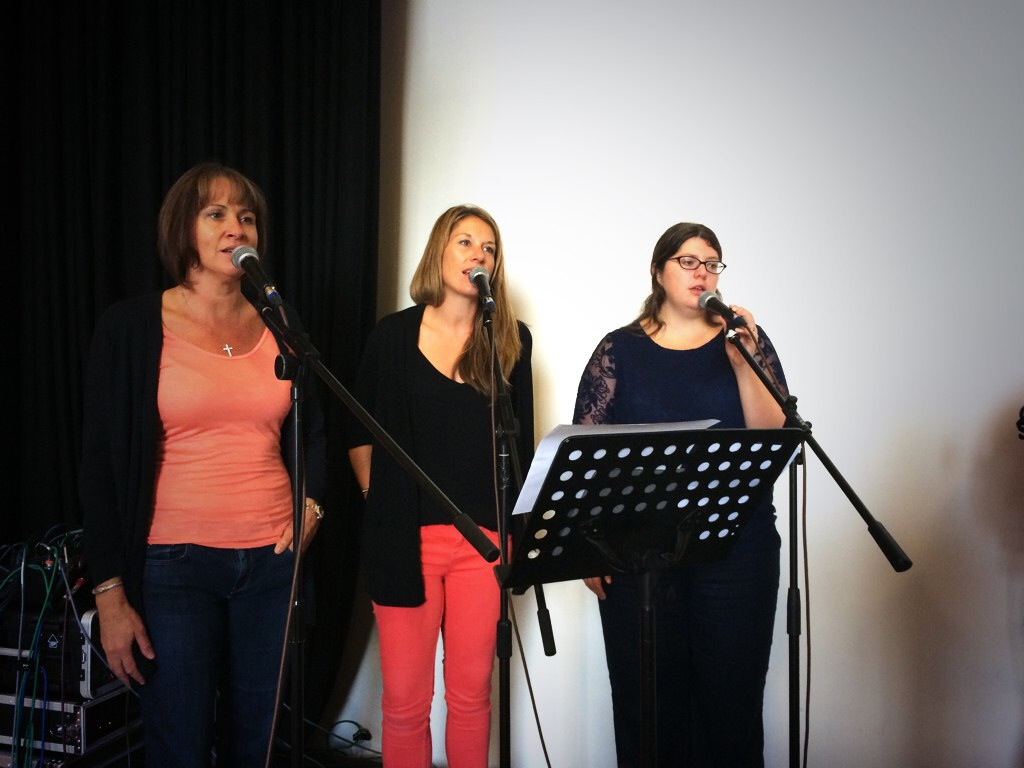 You just turn up, stand in front of the mic and sing. There’s tuning, no adjusting the sound, it’s just you and your voice.
Sounds simple enough – there’s no kit to carry – and if you are blessed with a decent voice, you’re good to go.
But it’s not that simple is it? Yours is a support role for the star of the show, the worship leader, and in many respects you have to make him or her look good. It’s the ultimate act of humility, which means your job is the most difficult of all. It seems like a thankless task but what you do is extremely valuable because you have the same instrument as the congregation. If you get it wrong everyone notices but if a bass player or a guitarist gets it wrong, only bass players and guitarists in the congregation notice.
So here’s a guide to help you become even more unnoticeable. We know, it’s a hard life…

1 Don’t… miss cues
Getting ‘lost’ in worship is to be encouraged. The spirit guides you and there’s nothing quite like singing with a passion and a heart that’ll connect you with God. It’s a powerful thing. However, you must remember that you have been chosen to do a job and that job is to serve the congregation with your voice. Service is the most powerful part of worship and if God has been good enough to bless you with the voice of an angel it’s your responsibility to use it responsibly. Missing cues suggests that you don’t really care about leading the congregation and helping the worship leader do his or her job. Be helpful, pay attention and be professional.

2 Don’t… lengthen every note
This is the backing vocalist’s equivalent of a guitar solo. The lengthened note is symptomatic of a backing vocalist who wants to be noticed – a sort of ‘look at me, ain’t I a beautiful singer’ cry for help. A backing vocalist who does this regularly is monumentally annoying. The lengthened note sounds like an attempt to upstage the worship leader, particularly if the worship leader doesn’t have a fantastic voice. Don’t do this: keep true to the melody and if the chart says it wants crotchet at the end of the line don’t stick a semi-breve in there.

3 Don’t…  overuse vibrato
Use vibrato when it’s appropriate: if you keep plundering this technique you can sound like Rolf Harris’s wobbleboard. A singer who understands vibrato is manna from heaven –he or she can use it to great effect and its power can be overwhelming. There is a caveat though: on the more tender songs it just sounds try hard particularly if the vocalist has a technique that makes them look like Shirley Bassey. Jazzy types who have been watching too many Cleo Laine videos can be off-putting too.

4 Don’t… keep coming in late
There’s two parts to this. First of all, you may think that because you don’t have a musical instrument to set up that you can turn up when you like. Drop the ‘I’ll just rock up when I want’ mentality, and adopt the ‘I’ll turn up when the rest of the band turns up’ approach, because if you don’t it looks like you are just happy to be a part-time member of the band. Be involved. The second part to this is… don’t keep coming in late, musically. It is irritating for a worship leader who has drummed into everyone the importance of timing yet the singer just keeps meandering into a song. Be positive, be confident and take the trouble to learn when it’s time to begin the song.

5 Do… keep harmonies in tune
An out-of-tune harmony sounds like a tugboat scraping along a harbour wall. There’s that ‘Oh Lord, make it stop’ feeling that pervades the whole church. The dodgy harmony may have only lasted a couple of seconds but that wince seems to last as long as the entire length of Madame Butterfly. Be clear about the sound you want to make: practice it, hear it and if you are not confident that you haven’t quite got it right then stick to the melody.

6 Don’t…. be the wannabe that upstages the lead vocalist
We alluded to this in number 2, but it is tempting to try to upstage the worship leader, or even the number one lead vocalist. Sure you might have a better voice, sure you might have a greater understanding of music and sure, technically, you are the better vocalist but know your place. If you have been chosen to be the number 2 vocalist – for whatever reason (you may be new to the band, or the number 1 vocalist has been chosen because of a confidence crisis) – be humble and support whoever you are singing with. Not all number 1 vocalists are the best, but they have been chosen to serve and you must do the same. There is a classic story of a well-established worship leader who started out cleaning the toilets. He did it without complaining and he understood the principle of servanthood. You might need to do the same.

7 Do… give yourself a break
A worship leader might give you free rein to sing when you like. He or she has put enough trust in you to allow you choose when and when not to sing. It’s not necessary to sing all of the time and all band members (including drummers) learn when it’s appropriate to stop playing. God knows your heart and he particularly loves a humble heart. You can almost rejoice in the ‘not singing’ – it sounds weird but there is beauty in your own silence and it gives you the chance to listen to Him and understand what he is saying to you. Clearly, you can overplay the underplay – the worship leader doesn’t want a mute backing singer.

8 Do … learn to harmonise
If you are new to this, then break yourself in slowly. There is nothing more uplifting than a beautifully sung harmony, but then again, there’s nothing worse than a badly sung one too. It’s a fine balance. You have been chosen to blend harmonies to lift the worship, not just to sing the melody. The congregation sings the melody and if you do this all the time then you are doing nothing more than adding to the noise. Most churches tell the worship leader to stick the melody – that’s his or her job – but your job is to, well… make the vocals sound better. That’s pretty much it. Harmonies are altogether lovely so learn how to harmonise properly even if it means singing along to worship albums in your bedroom. Just try not to wake the neighbours.

9 Don’t … keep singing chorally
The choral sound is great… in a choir so keep the Katherine Jenkins-soundalike stuff to a minimum in contemporary worship songs. Have you heard someone singing ‘He brought me to his banqueting table’ in a choral style? Well, we have and it sounded quite horrific. There are moments in life that stick out in your memory and that unmistakeable choral tone used as backing to a Kevin Prosch ‘classic’ is in the ‘That was truly awful, wasn’t it?’ category. If you are invited to sing in the choir at the Christmas Carol service give it your best Kiri te Kanawa, but in other circumstances be secure in the knowledge that the choral stuff in modern Christian music sounds dreadful.

10 Don’t… clash, do blend
If you are one of a number of backing vocalists (two or three is usually enough) then listen out for each and do your best not to clash. Work out the harmonies and keep them simple. Also, try to keep the volume levels consistent so that one voice doesn’t dominate the other. There is a tendency, that if one person has a stronger voice, the other becomes a shrinking violet and can’t be heard. That’s not the point – you are there to blend and if is really apparent that one is louder than the other, see if you can get the sound man to adjust the levels accordingly.

If you are new to this, then break yourself in slowly. There is nothing more uplifting than a beautifully sung harmony, but then again, there’s nothing worse than a badly sung one too. It’s a fine balance. You have been chosen to blend harmonies to lift the worship, not just to sing the melody. The congregation sings the melody and if you do this all the time then you are doing nothing more than adding to the noise. Most churches tell the worship leader to stick the melody – that’s his or her job – but your job is to, well… make the vocals sound better. That’s pretty much it. Harmonies are altogether lovely so learn how to harmonise properly even if it means singing along to worship albums in your bedroom. Just try not to wake the neighbours.

For lots more tips and practical lessons for backing vocals check out the Musicademy Harmony and Backing Vocals DVDs and Downloads.