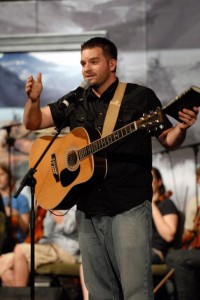 Guitarists perform a fine balancing act in worship groups. They are there to embellish and add the icing on the metaphorical worship cake. If they bring too much icing with their grab-bag of tricks they can destroy something beautiful within seconds.

Lead guitarists should be encouraged, though. Guitarists who choose an electric invariably see it as more than a passing hobby so the ones who really get into it often spend more time honing their skills and expanding their knowledge than is immediately noticed. That desire to hone their craft needs to be appreciated and embraced by worship leaders, congregations and churches as a whole. Yes it can seem a bit all consuming, self involved and even an identity to the outside world but if harnessed well and appreciatated, a good, team playing guitarist with a sensitive ear and a servant heart is pure gold. A guitarist without these traits is like a pew with a nail in it. Painful, and there to stay.

So, for the unloved lead guitarist who desperately needs a claw hammer, help is at hand.

1 Do… keep your volume levels in check
There are two schools of thought here – one that comes from you and the other that comes from everyone else. Your school of thought is: ‘I can’t hear myself’. Everyone else’s is: ‘The guitarist is too loud’.
Guitarists, who are offering their time to play at church want to worship like everyone else but volume, and the amount of it, can be a bone of contention. The trouble is as we all know, to get a great sound from your beloved tube amp, it needs to be cranked up a bit, but most amps are designed to be used at a volume WAY above church levels so, get a small amp and point it towards the instruments that produce volume and need to hear you. I.e. the drums – I.e. not the backing vocalists. Also try to get 6-10 feet away from your amp and angle the speaker towards your face. it’ll sound a lot louder then. And do use your guitar volume control or even a volume pedal to match the intensity of the song and the volume of the singing. Maybe set it on 8 for the rhythm parts and 10 for the out there stuff. Lastly don’t use too much pre amp distortion. You won’t be able to hear yourself and that classic ‘wasp in a jam jar’ tone will get lost in the mix. Cleaner tones, without masses of reverb or out of time delay, cut through more and generally the congregation can cope with them better than the uber metal sound. Don’t worry, you won’t  have to go super clean and join the Gaither band. Even classic rock and metal tracks had less distortion than you think.

2 Don’t… play all the time
Songs enjoy space and arrangements rely on musicians having the discipline to allow that space to happen. With electric guitar being potentially so dynamic its contribution can really lift a song, but as with anything that can add strong flavour, too much can ruin the recipe. So in music it is particularly tempting just to go in too early. Give songs time to build – don’t be the 800-metre runner who’s kicked in at 300 to go and is running out of puff in the home straight. Playing all time means you’ll stay on the same level and the beauty of worship is that it ebbs and flows. If you are simply strumming away, mirroring the worship leader’s part, then you are just adding to the noise not the beauty.

3 Do… maintain your equipment
String breaks cannot be helped, but you can do your best to avoid them by changing your strings more often. It sounds ridiculously simplistic but old strings sound dull, they give up the ghost at key times and it’s just distracting when a guitarist has to walk off stage for a couple of minutes to change a string if he doesn’t have a spare axe.
Then there’s the amp meltdown, the dodgy lead, the weak tuning peg, the temperamental volume pedal… all waiting to try the patience of even the most benign musician. Guitarists generally have a lot of gear and that means there’s more to go wrong and a rehearsal delayed by someone trying to trace the source of that infernal buzzing is like being stuck on a stationary train to Wigan. To be honest that’s often a result of having a lot of stuff to plug in that’s not regularly used elsewhere. Pulling and untangling cables and power supplies shortens their life expectancy dramatically so get yourself a simple, usable, permanent set up that requires the minimum setting up and plugging in. So guitar into board, board into amp, two plugs, bish bash bosh, and off you go!

4 Don’t… always play the lead lines
You can get in a rut with this: it is tempting, particlarly if you don’t know the chords to the song off by heart or can’t follow it by ear just to play the good old pentatonic scale  but that just suggests you are not really thinking about the song and that you’re merely going through the motions. Listen to the song beforehand and get some inspiration to find something that fits the arrangement hand in glove as if it was on a CD. That generally means a great but not necessarily complicated rhythm part with well chosen sounds. Most worship leaders want you to keep it simple but they love it when you come up with something that fits – and inspires – the rest of the band and the congregation.  Remember, you don’t need to be a technical genius to play something beautiful.

5 Do… play in different styles
There are no-nos in songs. Even tried-and-tested Musicademy musicians have been known to choose completely inappropriate styles. Playing a particular worship song ‘in the country style’ proved to be metaphorical banana skin once –  and the memory of that incident still hurts us now. It sounded like Billy Ray Cyrus pepping up a funeral. We’re only human. Still, in spite of that we still think there’s room for a bit of well-chosen variety. If you are a dyed-in-the-wool metalhead make sure that Slash licks don’t keep seeping into every single song. It’s also refreshing when you make a conscious effort to keep away from your ‘first love’ because when you do go there it’ll feel fresh and you’ll enjoy it more. Don’t persuade yourself that everyone loves your ‘signature sound’ – they do, but they’ll hate it if thats all they get for three straight Sundays. So play for the song – what sort of style was it originally written and arranged in? Could you find out the styles that influenced the writer? (there’s a lot of info out on the net if you dig a little). What are the authenic sounds and chops of those influences? Can the ENTIRE band pull off that style credibly? And crucially will the congregation apprecite it or will it turn into a bit of a mild comedy moment? – Reggae anyone?

6 Don’t…. look for solos/new licks all the time
Hard work yields results and if that new solo or riff you have mastered after hours of practice sounds terrific in your bedroom then it’s certain to sound wicked in the worship set. Well, no. It is tempting to parade your newly acquired musical wares in front of a packed congregation and, if performed well, even more tempting to keep on doing it. This is a good way to get yourself removed from the worship rota. The ‘Sweet Child O Mine’ riff works well harmonically over the verse of ‘Dancing Generation’ – but, and its a big but – just because you can do something does it mean you should?

7 Do… use different sound combinations
It’s important that you listen to the music, experiment with sounds and try something different, but it’s also important that you have a clear intention about what you want to do. Make sure you have nailed it during the rehearsal – if you start messing around with the sounds in the set it’ll freak the band, and the congregation out. Don’t go overboard though – there are guitarists who turn up to church with a pedal board the size of a dining room table and throughout the service they’ll try to use all of them regardless of whether it fits in with the song or not. A good pedal junkie knows when and how, and keeps his or her or powder dry until the time is right. You may have bought your new fancy pedal and feel desperate to try it out but if the set list doesn’t warrant its use, resist the temptation – there’ll be other times.

8 Don’t… clash with the keyboards.
Keyboard players and guitarists have to work together. Like drummers and bassists who need to lock down a rhythm, these two have to find a musical ‘place’ where they can operate together without clashing. Being sensitive to what the keyboard player is doing is, erm… key, and if you can interlock and work out structure and arrangements that co-exist nicely, then you are halfway there. If the keyboard player is playing something busy, hold back, and if they are playing pads then you have licence to experiment a little. Rhythmical business by two instruments can often can ruin a groove so even if you cant hear the keyboard, try and look at their fingers to work out what rhythms they are playing and in what register. Worship bands need ‘teams’ that can work together (ahem) in harmony.

9  Don’t… noodle in rehearsal
This is wholly frustrating and it drives, well, everyone up the wall. If you do this you’ll return to your car after a Sunday service to find all four tyres deflated. Noodling is Chinese water torture for everyone except you and the only thing that stops your worship leader and accompanying musicians from grabbing you by the ears and imploring you to shut up is that they are Christians, and they have the gift of love and patience. Noodling inbetween songs in practice times while the worship leader is communicating to other musicians, is wholly rude, completely insensitive, narcissistic, galactically irritating and plain wrong. If you are a serial noodler put your hands in your pockets, count to 360 and resist every temptation to start practising your pentatonic scales. If that’s just impossible, take off your guitar and step away from it when someone is talking through changes. And turn off your flippin IPhone. Don’t even think about phoning, texting, tweeting, playing tetris, to make use of the ‘dead’ moments between playing the songs…

10 Do… meet up with worship pastor on a regular basis
Most churches have a worship pastor and, as a mirror image of everyday society, they come in all shapes and sizes and, crucially, they have their own foibles. But, that said, let’s generalise gratuitously for the masses.
The archetypal worship leader plays acoustic guitar with some skill, can write a few tunes and has a reasonable voice. He or she is Jack of all Trades and, without being disrespectful, they are master of none. They have a basic understanding of music and their guitar-playing is fairly simplistic. It is, therefore, helpful to meet up with your worship pastor on a regular basis. During these meetings you can offer some tips, jam together, come up with song ideas, arrangements and pray together. It all helps. Even if your worship pastor is solely a singer or keyboard player it’s just useful to get an understanding of where they are coming from and spend some time together away from the constraints of the usual frenetic, time-limited rehearsals. You get to cut a whole lot more slack when experiencing ‘musical differences’ if you both know that you genuinely like each other and have got each other’s back.

The 10 commandments of electric guitar

How to increase speed when playing guitar 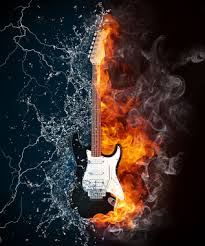