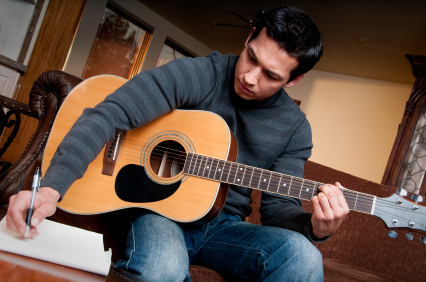 Imagine this scenario. You are an acoustic guitarist working with a worship leading keyboard player and are asked to play songs in non guitar friendly keys but you are only presented with a chord chart in the keyboard based keys like Bb and Eb and F. I work with a lot of players who encounter this kind of thing on a weekly basis and rather than trying to struggle through on barre chords I encourage them to transpose the chart using a familiar key, a capo and the Nashville Numbering System. Even if you’re not au fait with Nashville or chord theory it’s a straightforward process so if that’s you try giving this idea a go. Let’s say we have a song in the key of Bb with a few tricky chords as per the chart below.

To transpose this into something easier to play we need to start with a key you are familiar with on guitar. I generally recommend G but any key that you are most familiar with all the typical chords will do. Next, list those chords out in number order so G looks like this.

If you’ve not done any chord theory before you’ll probably recognise how familiarly grouped these chords are in songs in G. Most songs take in four or five chords but remember the major scale (do re mi etc) always has seven notes from which we get notes for our melody lines. So as long as the song stays in key then those seven notes also give us seven bass notes to play with from which we build our chords in the key.

Notice also that if a song uses a 7th bass note the associated chord is technically a diminished chord (F#dim) but that sounds quite dark, so in pop based music we often instead use the 5th chord in the key (D) in conjunction with the 7th bass note (F#) so our 7th chord becomes D/F# instead. Again I’m sure many of you have seen this countless times in songs in the key of G. Similarly another popular substitution is when we hit the 3rd note in the key as a bass note. Technically the chord we play is a Bm but often, particularly when progressing towards a C chord we use a G/B (1/3 chord) instead which sounds a bit more major and lighter.

Next we need to know the chord numbers in the key of Bb. To do this write 1 – 7 across the top of the chord chart and then list out the letters of the chords in Bb 1-7 as below. Don’t worry about any flats, sharps, or even major or minor chords at this stage, just think alphabet.

Next go to the chords on your chart and line up the chords you see with their alphabetical number in the key as below. The chords themselves in the song will dictate the sharps and flats so don’t worry about that, just line up the letter with the number.

Now you can where the sharps and flat lie. In Bb we have one flat and so chord 4 is Eb not E so also write that into your 1-7 chords in Bb. In our song chart here the thop line is pretty straightforward containing only chords 1 4 5 & 6 but the second line gets more complicated. First there is a Bb/D chord but again all you have to do is line the chords up to their numbers. Bb is chord 1 and then the new bass note after the / is note 3 giving us a 1/3 or G/B in our familiar key. The exact same process is used for the F/A giving us a 5/7 chord. Next if we now rewrite our chords into the familiar key on our chart we get this.

The only anomaly is the Cm chord on the bottom row. C (C major) is in key but Cm isn’t in the key of G. Occasionally we find a chord where the chord itself goes out of key to help do something interesting with the melody. If this happens remember the original chord chart is your guide. So if the chart dictates the chord to be major or minor go with it and just change the alphabetical letter to suit your transposed key. A classic example would be Chris Tomlin’s Holy is the Lord. If in Bb on ‘together we sing’ the chord goes to a chord 2 but C major (Cm is in key) so in transposing into G we would play A major and not the chord in key which is Am.

Finally we need to know which fret to place the capo on. This can be simply worked out by finding a bass note of the familiar key, e.g. G, on a string (low string 6 fret 3) and then on that SAME string counting up the frets until you hit the note of the key the song is in. E.g. Bb is 3 frets away from G on fret 6. Therefore put your capo on fret 3.

There is of course so much more to chord theory and transposing. If you want to know more we have a full Play By Ear, Improvise and Understand Chords in Worship DVD course. This comprehensive practical working guide will give you plenty more learning and I’d really encourage you to understand chords as deeply as possible as it with vastly increase your musicianship as well as your ability to communicate to other instrumentalists in your worship team.