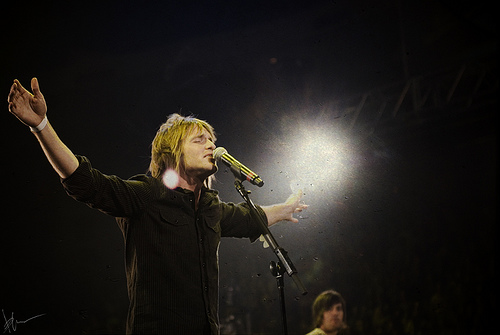 I was at Kingsway’s Mission Worship in November and was delighted to sit in on a seminar given by our friend Aaron Keyes. As well as a singer songwriter and touring musician (Aaron co-wrote Psalm 62 – My Soul Finds Rest, with Stuart Townend), Aaron heads up worship at his church in Atlanta. In addition, he, his wife Megan and four sons share their home with a team of intern musicians that Aaron teaches and pastors. He is therefore well placed to offer some advice on building and pastoring worship teams.

What follows are my notes from the seminar. I hope you find them helpful – they are not beautifully crafted but I think you’ll get the basic concepts.

As is typical not only of Aaron’s teaching but also his worship leading, much of this seminar was based around Biblical texts and examples. He begins with Psalm 90 where Moses writes “Let the favour of the Lord be upon us and confirm the work of our hands”. Aaron explains that the word “confirm” here really means “to give permanence to”. Isn’t that what we want of much of our work, let alone that of our worship teams.

Quality attracts quality and vice versa. Before we can attract good musicians we need to improve our own skills.

When was the last time vocalists did some vocals exercises, guitarists some scales?

We want to have the heart of Samuel who identified the anointed people (namely Saul and David) – we want the eyes of God to help us identify and invite/recruit the people God would have serve on the worship team. So we need to be actively looking for the up-and-coming musicians – perhaps from the youth teams.

For larger churches, open auditions can help you not only identify possible new musicians but also assess which are the most suitable. Of course for many small churches we are only too grateful for anyone willing to help out, but some larger churches do enjoy more musicians than there are spaces to serve. For these Aaron reinforces how important it is to build up the people you “reject” – minister to them, pray over them, listen to them and together work out where God is taking them as it may be better for them to minister elsewhere. Give advice for ways that they can improve as musicians and also identify their gifts in other areas.

For new members to a worship team Aaron advises scheduling in a few times for them to play with the team and see how they do. He would also work with them pastorally to see where they are with God. He says “If you want to see Heaven invade your sanctuary and see lives changed, you want musicians with a heart for God’s people, who want to see them changed. You need to find musicians who are seeking to walk with God themselves – these may not be the technically best musicians but may well be those best placed to lead the people of God in worship- walking with God is more important than brilliant musicianship.”

Aaron embraces the occasional inclusion of unusual instruments. He’s incorporated both lap steel and hammered dulcimer which have opened some variety and a different flavour to the worship. Its good musically to have a broad team that can bring something different in different seasons.

Aaron reinforces that there is a place in the presence of God for joy. Worship shouldn’t always be heavy. Work on developing a musical arsenal that can move in the celebrative and the reverent and everything in between. Jesus was anointed with the oil of joy above all things – Hebrews 1.

Empower and inspire with feedback rather than overpower with critical feedback. (We’ve a great blog post on this here) Its good to inspire – encourage them by focussing primarily on their strengths. For instance rather than critiquing a drummer’s lousy timing, encourage them in what they are good at and buy them a metronome.

Try to educate musicians in music theory. Aaron’s church trains using the Nashville numbering system (used on all our instructional DVDs too) – even people that used to struggle with the numbers system have persevered and find it much better to use than a traditional chord chart.

They have watched live recordings together and created arrangements from them. For instance, a Stuart Townend DVD where Stuart played a different chord sequence for In Christ Alone. They figured out the chords and taught them to the band – it was a much more complex arrangement than usual but they rose to the challenge and it brought something fresh to the worship.

We need to pastor our teams – disciple them. The Great Commission has one verb in the imperative, one word in the command. That word is surprisingly not “Go” but “Make”. It means that the focus of the Great Commission is on the Making rather than the Going. While you are going, make disciples. Whatever you are doing, make disciples. Churches have so many meetings and programmes, but do we really have many disciples? Aaron asserts that we have traded what’s Biblical for what’s professional. We’ve traded engaging people for entertaining them.

Another bitesized gem from the seminar was this “We don’t reproduce what we want, but we reproduce who we are.” If people like you they will follow you, no matter whether you are right.

Aaron tries to share with his team each week some of the things that God has been showing him. You have to lead sheep, not drive them. Being a worship pastor is about leading people into knowing God more. What you hear in silence, proclaim on the rooftops.

Intercede before you interact

Pray for your team. In Exodus 17 Moses was told to pray (he quite literally spread his arms). Joshua went to fight (Moses was the leader, Joshua the disciple). Aaron and Hur hold up Moses’ arms. God says for the first time in the Bible “write this down”. He write “That I have won this battle.” God won it, not Joshua the fighter. The battle was won on the mountain of intercession, not the valley of interaction. Moses is exhausted at the end. He is passionately praying for his team. If you want to pastor people, you must first pray for them.

Aaron points out that the passage in Exodus 17 is a prophetic picture of Jesus. Joshua is in the valley and fighting. He looks over his shoulder and sees the three on the hill – they are not giving up. When Moses prays, they are winning. On the hill of crucifixion, Jesus is praying, not coming down from the cross. And because of this persistence and refusal to give in we win.

Two nuggets of encouragement in concludion: In John 14:12 Jesus wanted and expected to be surpassed by his disciples. Anyone who has faith in me will do what I have been doing. He will do even great things than these.

And in the story of Ezra we see that the gracious hand  of God was on Ezra because he studied the word, obeyed  the word and taught what he learned. Aaron Keyes would encourage you to do the same.

Do share your tips and experience of leading and pastoring worship teams in the comments below.