Streaming online church services: the tech, the tips and the stories from around the world 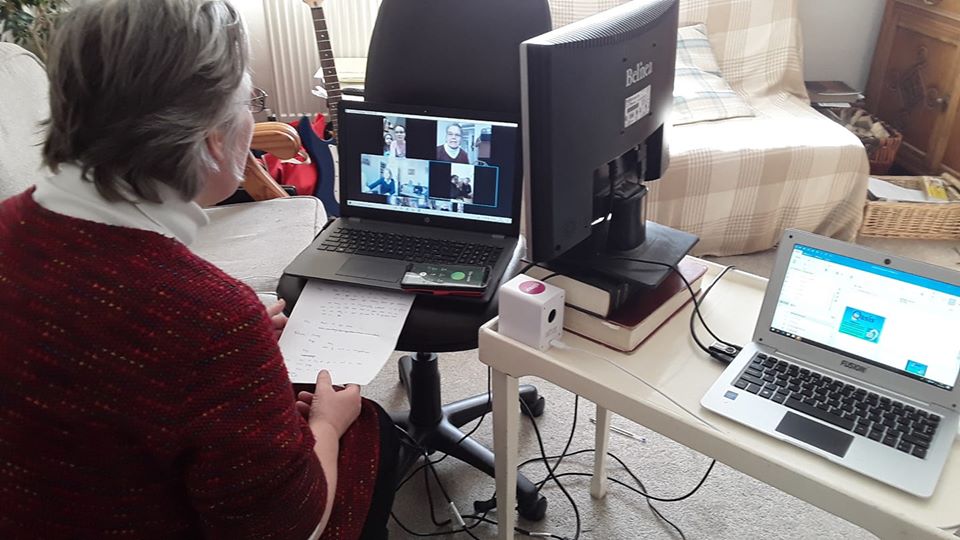 Last weekend was the first weekend that many churches globally closed their physical doors and instead embraced the virtual world of online services.

Over on the Musicademy Facebook Group several people had spent the previous few days discussing the technical options, the pros and cons of the various streaming platforms before taking their decisions on how to go live.

This article shares the stories of those first services.

Despite a few gremlins in the system, like the laptop dropping connection to the Team Link server when the landline telephone rang, Oasis Community Church Brightlingsea came together for Sunday worship online.

It was a bit chaotic with several people trying to pray or share testimonies at the same time but it was really very special to see and hear everyone. We even had a couple of older folk who don’t do technology listening in and contributing to the prayer via telephones, thanks to church members with unlimited calls packages and phones on loudspeaker.

We had one laptop runing the song projection on Videopsalm and a second one with the Team Link app on, mounted on a swivelling office chair to rotate between the worship leaders and song screen. We probably could have done it via a screen share but were afraid it might all be too much for one computer to handle and crash half way through.

The sound came and went a bit, and it sounded like echoes in a cave when we all said the Lord’s Prayer together. We also sang, with the music up loud enough to not hear the delayed singing coming back to us: ” Heal Our Nation”, ” Jesus Draw Me Ever Nearer”, ” Blessed Be Your Name” and “Build Your Kingdom Here” to the additional accompaniment of chiming clocks and a barking dog!

We learned several lessons through it.

But it was great fun and everybody felt encouraged and strengthened by the time of fellowship and we will do it all again next week as well as running a mid-week house group this way for the time being.

[Credit to Andy Conroy for the main photo]

We just used recorded stuff, prayers, ministry spot, kids spot. We then had a couple of songs using clips off YouTube. This was all circulated along with an order of service to follow with liturgy added via email.
We only had two songs, the first being 10,000 reasons and the second a hymn, name I can’t remember but my 2 year old was not a fan and kept saying “no” throughout it… 🤭 luckily there was only the grandparents and parents present. [Natalie Mc Dermott]

We used zoom.us for a small gathering with communion, one of our members has a paid subscription. We’ll be using it for prayer meeting and House group too. [Kevin Gordon]

We are a small, independent church and also used Zoom. It was a bit clunky at first, as it was our first attempt, but it was really good-especially as I have been in isolation for 9 days now. We were more interested in a sharing set-up rather than streaming a service (not really us, if you follow). I wasn’t sure that singing together would work, given the lag, but we may try that in future. What we did do was to watch a screen-share of a YouTube song and we all sang along but muted. Couldn’t hear the others but could see them also singing along, which was nice. [David Gibbons]

We ran a Facebook live stream from the worship leader’s house. He played piano and sang alone. His TV had the words projected onto it and was positioned so that it appeared in the bottom corner of the live feed. We streamed it onto the church’s Facebook Page.

Separately the minister recorded a sermon using a webcam and that was uploaded onto the media library of the church website.

Videos for children and youth work were also put onto the website.

Back to the worship live stream we were able to comment and send emojis during the session. The emojis sort of float by but the comments are now underneath the video, which saved on the Facebook page.

About 100 people were watching the live stream including a participant in Australia! [Jenny Hale]

Just me, my wife, our pastors and their kids. C100 & XF305 into a PC using Livestream Studio going out to Vimeo and simulcasting to Facebook and YouTube.

The worship band included the pastor’s kids on bass and drums. My wife pulled an absolute blinder on Mother’s Day mixing audio, controlling song words and cutting between the two cameras all whilst breastfeeding our daughter. [Josh Payne – link to the service here]

We just used Facebook’s own Live setup and YouTube but quality wasn’t as good as I’d have likes so may use OBS next week if we can still get to do it.  [Peter Austin – link to the service here]

We prerecorded and used our new YouTube site including Premiere and Live Chat. We decided against Facebook as not everyone has this, though used this, email and WhatsApp to share the link.
We are trying to work out what licenses we would need to stream other recorded music (we have all the CCLI UK licenses) and hope this becomes clearer in the coming weeks. [Stephanie Rankin]

We are a small Methodist church in southern Indiana. We used a Vimeo Showcase. Participants recorded their parts from their homes on their phones and sent them in. It ends up being a container for 10 videos for the whole service.

The pianist used a 1923 Cokesbury Hymnal to avoid copyright issues.

We shared the link to Facebook, YouTube and give out the link for those who don’t do social media. [Alan Hall] 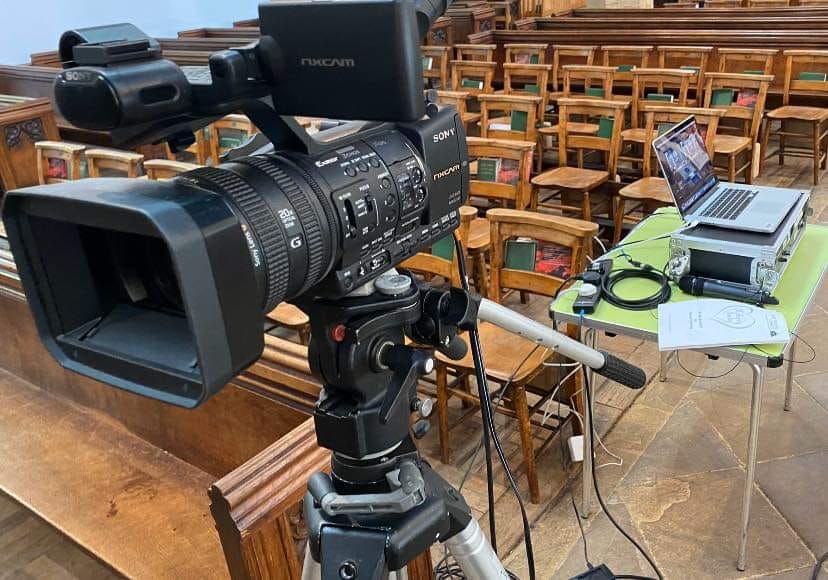 Decision made to keep people to absolute minimum (three people).

We borrowed some equipment to enable a huge step up from previous live streams using a mobile (and a failed attempt with a webcam, laptop and OBS). Really, good quality feed etc… more livestreams planned. [Richard Fletcher]

We moved all our churches to online or outdoors (probably changing again with new Govt restrictions today)… yesterday we were one of five locations who have already been streaming live for a while. Our main difference was no congregation… we ran similar to usual service with team only, Livestream on our website and YouTube (usually we do FB Live too but something didn’t run for once).

Added a team of moderators/chat engagement which was brilliant. Our tech team is already sensational and took things to a new level. Hoping we can still do this next week even in reduced form! [Louise Mathieson]

We’ve been doing videos a day or two ahead of time and uploading them to Facebook but with a scheduled post date. We’ve looked at the analytics and noticed that the average watch time is 9 minutes…and after reading an article about people’s attention spans we decided to cut our music time in half. Next week our pastor will shorten his sermon too. Then we’ll run some more analytics.

We are using an iPad to record but using some amps to bolster the voices.

We also have started a YouTube channel so it’s easier to access and a cooler platform for the younger generations ;)

Our recording venue is smaller so we opted to only have our two singers, one playing guitar, on screen to show that we were observing the 6 feet of separation rule. So the keyboard, cello, and cajon could be heard but not seen.

We pre-recorded the service and put it out ‘love’ using YouTube Premiere with Live Chat. [Jennifer Swallow]

This week we just videoed it.

Next week – OBS and two or three webcams.  [Mike Whitaker]

We have Facebook live setup and youtube. I went pretty smooth. Added some extra lighting and a few different things. We have a great tech group. [Deb McTavish]

We were able to borrow the set-up from a sister church in the area and pre-recorded the service to go out this morning. I led Goodness of God, Sovereign Over Us and Amazing Grace with just my guitar and my husband on harmony. Next week I think we can have a few more people participating in the music. [Brita Mae Rust]

Our team posted a recorded video on our YouTube channel (which is new) and put a link on our Facebook Page. We also had the option to give online for the first time. Our worship leader played acoustic with pads and keys in the background (pre-recorded I’m assuming). Sermon followed that and then a communion meditation. We were able to pick up pre-packed wafer with juice yesterday. [Pamela Jewell Yates]

Our thoughts and observations

I think Andy Conroy’s list of lessons learned at the top of this article covers a lot but here are a few other suggestions and things to reinforce that others have said.

Thanks to everyone for their contributions. Do share your own experiences in the comments below or in the original Facebook thread.