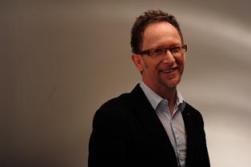 Graham Kendrick has been called a ‘father of modern worship music’. Over the last 30 years, he has written hundreds of worship songs including Shine Jesus Shine, Knowing You and The Servant King. Graham’s songs have impacted thousands of churches across the globe.

Now just weeks away from releasing his 30th studio album, Graham spoke to CCLI’s Sam Hailes about the state of today’s worship music and the importance of good song writing.

How did you first become involved in song-writing?
Although I’m best known for writing praise and worship songs, I started out writing folk songs that I used to try and communicate to my generation who weren’t particularly interested in the gospel. I grew up in church and as I began to write songs I realised I had learned a certain kind of language, call it ‘Christianese’. There are all sorts of words and concepts that are common currency in our worship songs, but if you try and use them with people who haven’t been brought up in church, they stare at you blankly. I made the decision that I wasn’t going to use any Christianese that the outsider can’t understand. The first thing that happened was I realised I didn’t know what half the words meant myself.

Is it best to wait until you feel inspired to write, or write continuously?
I believe in divine inspiration, I also believe in human perspiration. God is very gracious, he works through people. If he wanted to deliver perfect songs, perhaps he’d send an angel or a CD would materialise. But he chooses to work through people and as people we can start out with a natural talent, but it has to be developed and crafted.

What are the main challenges you face as someone who writes worship songs?
Artists should always be be at the cutting edge of seeing things in a new way. If you’re going to be a creative person in church, the challenge is to be able to communicate the ancient truths in a fresh way. Words can wear out with use, and it becomes difficult to actually know what they mean anymore, so we need fresh words. Language is changing in the world faster than ever because of communication means we take for granted: Internet, texting and technology. New words and concepts are constantly coming in. You go to church and it’s the same ones people were using 50 years ago.

Sometimes we don’t even think, we just use the words. If I just sing: ‘You are worthy you are worthy’, to you or I, that might sound complete, but actually it’s not a complete statement. You are worthy…of what? Words carry a feeling with them because we’ve used them so often before. Words become loaded with meaning. Certain words are associated with certain experiences of worshipping God and being in his presence. For us they carry that association but for someone else they might not.

What has helped you to write great songs?
One of the best things that ever happened to me in my lyric writing was I went to college and one of my subjects was English language and literature. I had to read a lot of books and critique a lot of poetry, but I was given the skills of critiquing language. My lyric writing went on in leaps and bounds because I was able not just to write something, but to look at what I’d written.

You’ve been talking about getting more worship songs based on stories into church. Tell me more about this…
I think we have a very narrow idea of what music and songs in church should be these days. The popular style of worship has all become vertical. We’ve neglected the more communal stuff. Particularly Western culture which is very individualistic as you usually end up with songs which are about me and God. There’s much more than that and telling stories is part of it. A lot of the Psalms are talking about the story of the Israelites, the events like crossing the red sea. There’s a whole story and a history. Old Testament worship is the retelling of a story which then has a response added to it. Since Christ has come, the story has gone on and suddenly exploded into amazing 3D belief. It’s an amazing story. God came to earth. God has been among us and this is what it looks like. Because that happened, people believed him, preached the gospel and formed churches. Here we are a couple of thousand years later, we’re still part of this on-going story. I think we need to tell that story.

What traps can songwriters fall into?
What often happens is we just end up trying to copy the latest big worship song. Why bother if someone’s written it already, and it’s better than yours? You can do something totally unique, you’re in your church and Chris Tomlin is not! There’s a story to be told, right there in the middle of your community.

Tell me about your new album.
It’s going to be called Banquet after one of the songs. It’s really the cream of what I’ve written over the last three or four years. Many of the songs I’ve been using for a while like Love Each Other, The Peace and a song called Stand Up which I’ve been using at The Renewal. If you’re looking for a unifying theme it’s about being church together and a community of believers. I’m very deliberately trying to talk about why we gather for worship, it’s not quite a story but it’s very much a horizontal kind of thing. Some of them [the songs] also fit very nicely into the journey of worship, particularly if churches use a degree of liturgy. There’s a couple of songs that fit the breaking of bread situation very nicely.

What encourages you to carry on as a songwriter and an artist?
One of the highest compliments song writing can be is when someone comes up to you having sung your song and says: ‘Thank you for that song. I didn’t have the words but you gave me the words to say what was in my heart.’

This interview first appeared in CCLI’s UK newsletter. Thanks to them for giving permission to reproduce it here.