Me, worship and Jesus (though not necessarily in that order!)

Paranoia is abjectly useless! Most emotions or thought processes at least serve some sort of purpose: fear can protect us from harm, injury or death; empathy enables us to enrich the lives of others, but paranoia is just utterly pointless.

Picture, if you will, a 37 year old, hung-over, perspiring, middle-class man. Head bowed, not in reverent awe but rather cowardice, amongst a throng of 300+ “happy clappy” Christians, in a school hall on a temperate May morn. Now this chap is a self-confessed “devout atheist” but his new partner, a still married (steady with those stones there, folks) mother of three, is not. Church is an important part of family life and “if you’re going to be a part of this family, you’re going to church”. I’m a man of the world (the chap’s me, in case you were still wondering), broad shoulders and all that, seems like a perfectly reasonable request, how hard can it be? Well, as it happened, really hard!

My previous experience of church had thus far been the annual Harvest Festival service in my childhood village church (one of these days I’ll tell you of the embarrassing incident that involved me getting the spike on the end of the Cub Scout flag-pole I was carrying stuck in the wooden lintel above the church door!), sporadic family weddings and, sadly, a smattering of funerals. This broad palate of rich, “spiritual” experiences was, I naively believed, all the preparation I would need. I can hear you tittering from here. Stop it.

I wasn’t even aware of independent churches, that there was any such thing as Contemporary Christian Music and it was a number of weeks before I actually understood which part of the service the “worship” was. So there I sat amongst a throng of church goers, almost all of whom were actually Christians (there’s a difference, you know!), who thought nothing of shouting “hallelujah” at the drop of a hat, collapsing prostrate on the floor without a by your leave or storming the stage to share their inner most secrets without invitation. I was, frankly, aghast. And, more to the (paranoid) point, utterly, utterly convinced that my atheism was as apparent to all and sundry as was my head, arms or any other visible part of my anatomy. It therefore followed that a lynching (or, had I been any less Biblically ignorant, a good stoning) was only moments away.

Now I’ve had a few scares in my time: car crashes, childhood surgeries, teenage altercations with the law, but nothing compared to this. I was left visibly shaken. Worse was to come as I was expected to do this the following week, and the week after that, and the week after that. In fact, forever. Every week I went through the same hell, so paranoid that sometimes I would spend half the service hiding in the toilets. I kid you not.

Needless to say, as the weeks became months, the terror subsided, taking the paranoia with it, leaving me bewildered and curious in equal measure.

It was an exhausting introduction to church life, but I firmly believe that it was tailor-made for me by God himself. A mainstream Anglican service, for example, would have been a much more comfortable experience, but it wouldn’t have challenged me, and without the challenge, I think I would still be living a Godless life today.

Now, would I be right in thinking that you’re wondering why I’m telling you all this? Thought so. Well I’m afraid you’re going to have to wait before you find out because this feels like the right place to stop for now. 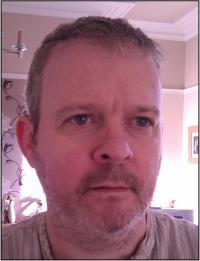 This is the first in a series of articles by Nick. Links to the rest of the series are below: