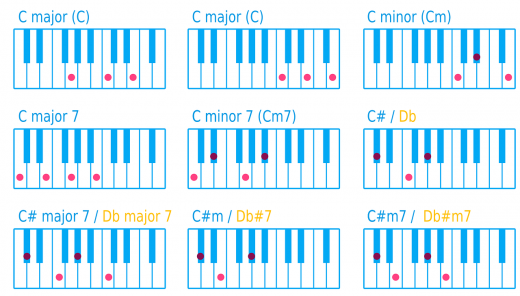 Learning how to play by ear

Did you try it? Did it work?  Let’s try working out the chords in the keys of C and E so you can also play songs in two further keys.

Add the alphabetical letters to the numbers starting with your root note i.e. key of ‘C’  is 1 ‘D’ is 2 etc.

Add the major, minor, minor chord rule to the notes.

Add sharps or flats to the letters. We will look at how to find this out in an exercise below but for now just be aware that the key of C has no sharps or flats and E has sharps on note numbers 2 3 6 and 7. So just add a sharp symbol (#) to the chords and notes on those note numbers.

Now try and work out the correct notes and chords in both of those keys. I have put the answers at the bottom of the article, so give it a try. You won’t know unless you have a go!

So if you go back and remember the chord sequence you worked out for your song in the key of G you can actually learn to play it in the two other keys we have just worked out.

The way to do it is to line up the numbers of the chords you have played. E.g. if the song went…

If you took those same chord numbers and lined them up to the key of C you would get:

This way you can transpose any song to into any key

What we have been exploring here is something called the Nashville Numbering System. This was devised for the country music recording scene where songwriters would write the chords out to a song only to find that the hired session singer would need to sing it in a different key. Rather than having to transpose all those chords into another key, they came up with a way of numbering the chords in the key so that the musicians could quickly and easily adapt the “pitch” of the music without having to write it all out again. This system is now widely used by musicians all over the world to communicate song structures.

So when learning songs try to think of the chord sequences as numbers in a key rather than just the names of the chords on their own.

That way once you get to know the chords in each key you can play the same song in any other key just by remembering it’s Nashville Numbering sequence. It can also be used as a simple way of directing your worship band through a series of improvised chords. You could say ‘2 6 5 1’ ‘key of A’ and musicians will know to play Bm, F#m, E, A or even hold up the right number of fingers on your hand to show them which new chord you want to go to next.

In order to make the best use of Nashville we need to be able to work out which keys have sharp or flat notes in them. If we don’t do this then our major scale will sound strange from the outset in some keys. E.g The key of D has two sharp notes in it , F# – chord 3  (F#m) and C# – chord 7 – C# ½ dim. If you just played Fmin and Cmin instead it would just sound odd.

In all the most common keys every musical letter or note can have a sharp version of it. Eg as well as G there is also G#, as well as A there is also A#. In fact the only two notes that would normally not have a sharp option are E and B. If you play piano you will know the black keys contain the sharps and both the E and B notes don’t have a black key to their right.

This is exactly the same on a guitar. Each fret represents a single white or black piano key. As you play up the guitar fret by fret on a single string it’s exactly the same as playing from the bottom to the top of the piano, not missing out any notes at all.

As guitar frets aren’t marked out as black or white keys, we need to learn a system of one or two fret ‘jumps’ to help us work out which keys have sharp or flat notes in them. These jumps are called tones and semi-tones.

The major scale key that we have been looking at is always built up from a series of tones and semitones (or 1 or 2 fret jumps) in this order:

Which we will abbreviate to:

For visual learners you can see this looks quite symmetrical

If we start on the note C this would give us this series of notes;

With the key of G:

With the key of F:

By following that simple formula of tones and semitones, you will be able to discover the correct notes of any major scale including the sharps and flats. It doesn’t matter which note it starts on. It could be E, Bb, A# etc. It makes no difference.

As I mentioned last month, when we name notes in the major scale, there are three important rules:

If played correctly you should find you have played a correct sounding major scale. Try again starting on ‘F’ (fret 1) then ‘A’ (fret 5).

Use the notes on string 6 you already know to work out if the your major scale matches up to the natural A B C etc notes or if any fall between them in which case the note will be ‘something’ # or ‘something’ b.

Remember – you can’t have two of the same alphabetical letter in the same key. Eg if you have just played an A and have to go up a semi-tone then the next note will have to be Bb and NOT A#.

Once you have worked out the right notes in the key, you can then apply the Major Minor Minor chord sequence to those notes on the same 1-7 basis and will have the tools to work out all the notes to any key and all the chords that are in that key.

Learn to Play by Ear

This ear training system is explained in more detail and with lots of practical examples on our Intermediate Guitar, Intermediate Keyboards & Intermediate Bass DVDs and Downloads as well as our Playing By Ear course and upcoming Practical Worship Leading Skills Course.