The “Cut out and Keep” Guide to How Chords Work 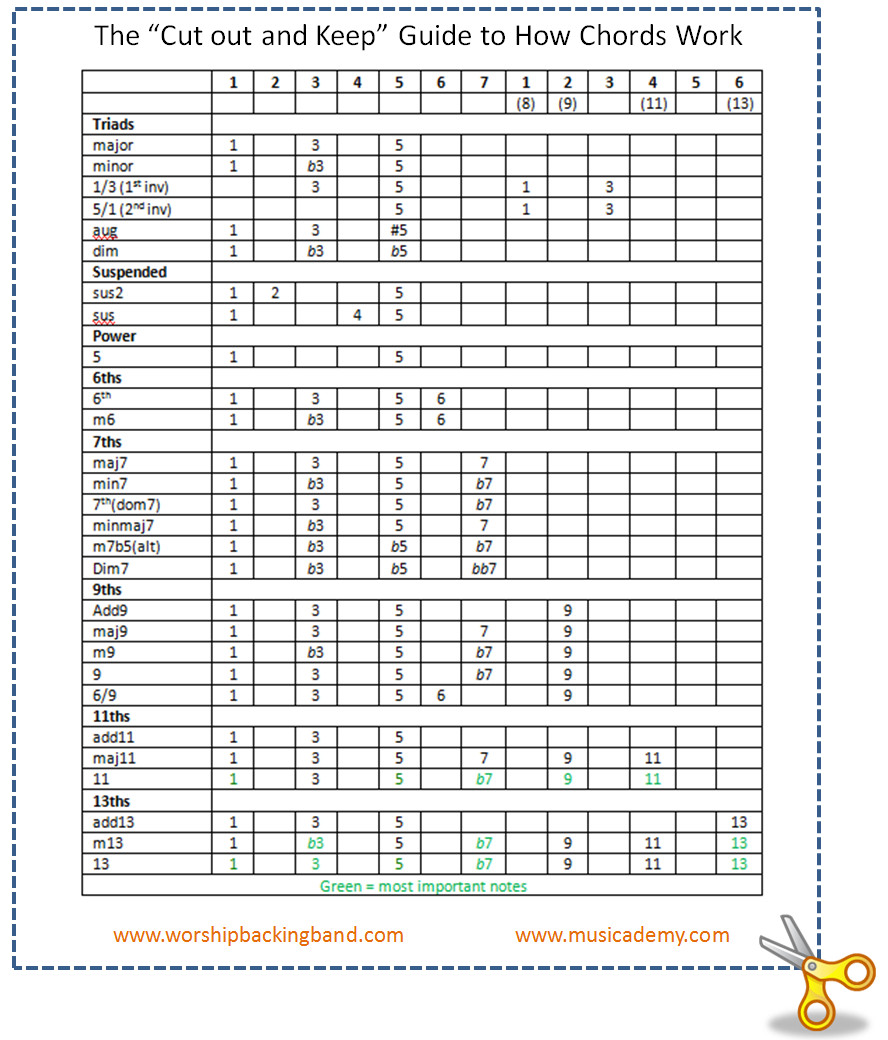 Here’s a handy guide to help you understand the notes the most common basic and extended chords.

If you’ve not done much chord theory its really worth absorbing.

Chords – the knowledge… that must be obeyed at all times!!

Major and minor chords are defined by the 3 note, i.e third note in the scale you are taking your chord from. Major chords are 1, 3 and 5, so the scale of G major is:

So a G major chords 1, 3 and 5 notes are G, B and D. Minor chords take the same 1, 3 and 5 notes but flatten or lower that 3 note by one semitone, which is one fret lower on the guitar and the next immediate key or note lower on the keyboard. This gives you the notes of G, Bb (B flat) and D for a G minor (Gm) chord.

The 1/3 and 5/1 chords are still basic triads just with the bass note shifted to one of the other notes in that same chord. These are known as first and second inversions.

Augmented and diminished chords are still basic 1 3 5 triads but messed about with a bit! If you augment something in life you make it bigger and so it’s the same with an augmented chord. It takes the major sound of the 1, 3 and 5 but raises the sound of the 5th note but one semitone. So if a G major has G B and D notes a G augmented has G, B and D# notes. Diminished chords are the opposite. If you diminish something or someone in life you make them smaller. So a diminished chord starts with a minor i.e 1, b3 and 5 and then also flattens the 5th to make 1, b3 and b5. For a Gdim chord you’d get G, Bb and now Db.

Suspended chords don’t use the third at all (which defines a chord as major or minor) so suspended or ‘sus’ are neither major nor minor. If you see a Sus chord it refers to the Sus4 chord i.e. notes 1, 4 and 5. So sus and sus4 are the same thing. Sus chords feel like suspended and need to ‘drop’ down to their major chord – I.e. Dsus4 feels like it needs to resolve to a regular D. Sus2 chords are 1,2 and 5 and sound quite ambiguous. Good keyboard players often use a Sus2 instead of a major chord as that ambiguity creates space in the sound. Give it a try!

Power chords, notated as ‘5’ chords e.g. C5, G5, E5 etc aren’t major or minor either because they have no 3rd. So you can play a 5 chord over both major and minor chords with the same bass note. Playing just 1 and 5 notes gives a very strong sound and works particularly well with overdrive type sounds.

Lots of people get 7ths confused. There are actually 4 main type of 7th chord. Maj7th are a maj 1 3 5 chord with the 7th note add in from the scale. So a Gmaj7 wuld be G B D and F#. I.e. the maj7 is always 1 semitone below the root note or first note of the scale. Minor7th are a 1 b3 5 minor together with a b7 note or two semitones below the root so a Gm chord would be G, Bb, D and F. The third type of 7th is a dominant 7th (dom7th) which uses a major chord (1 3 5 but also with a b7. Now here’s where people can get confused, a dominant 7th is often written as just a 7th I.e. G7. THIS IS NOT A G MAJOR 7. Dom 7th chords sound very bluesy where as maj7th chords sound darker and more jazzy.

Mathematically you can get a min maj7 chord as well but this sounds very distinct and as quite hard to fit into a song and make it sound musical. To my mind the only time ive hard a min maj7 is that very last chord at the very end of every James Bond theme tune – yes that one!

An add9 is not a 9th! Add 9 chords sound very smooth and are major chords with an added 9th note. This is the same as a second but crucially placed above the octave. A second note in the octave would give you 1 2 3 5 which would sound nasty and mushy. All other 9ths apart from the 6/9 have to include the relevant 7th as well and then the 9th is place on top of it.

Again an add11 is technically a major 1 3 5 chord but with an 11th place on top of it. An 11th note is the same note as a 4th but again crucial an octave up. Any note place above the 8th or octave like this is known as a compound interval. This kind of chord happens with guitar but isn’t often used as a keyboard voicing. As you may have noticed too, that at this point you might well run out of available fingers so we’ve not included all the mathematical permutations of the 11ths here, just the commonly used ones. Maj11 chords do come up a dom11ths aka 11ths are very common. As you can see we’ve highlighted the important notes to voice (unless you’ve got 14 fingers).

The same rules that apply to 11ths apply to 13ths so again the highlighted green notes are the important ones. Also in written music an add 13th chord is often notated as a 6th – so now you know! 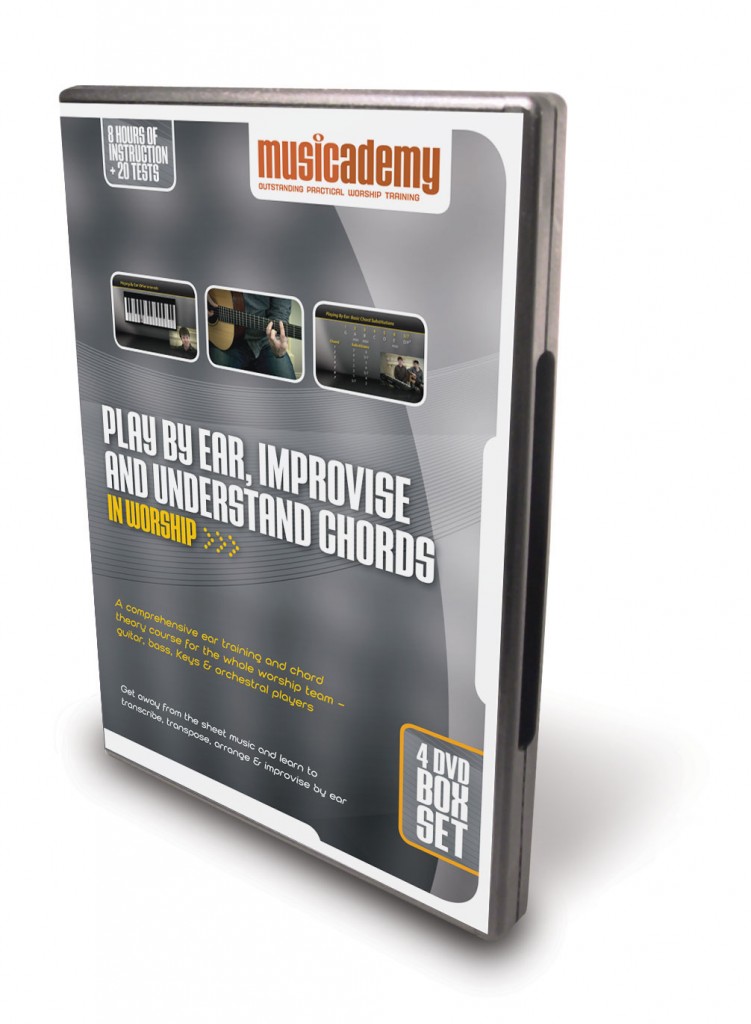 If you want develop your chord knowledge much more deeply do check out our Play by Ear and Understand Chords course. This 4 DVD set is probably the most in depth course of its kind and will lead you through hearing and identifying chord progressions both simple and complex in and out of key, give you the tools to understand the notes in any chord, help you improvise and ultimately be able to pick up and follow any chord progression or song by ear. It’s packed full of lessons with demos, practical examples to work through, play alongs and tests to maximise your learning.

The “Cut Out And Keep” guide to chords in a key

The Musicans’ “Cut Out and Keep” Guide to Transposing