What to include in a music chart 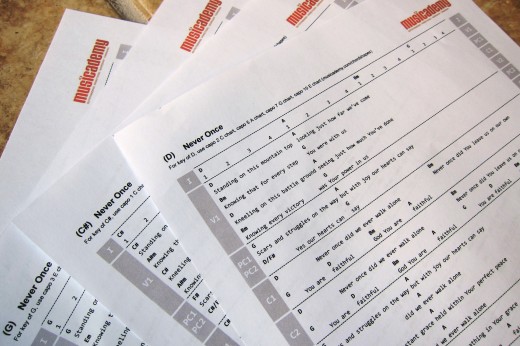 Our Dad (Steve’s covers band) are doing a wedding tonight and I had to do a chart for a simple Van Morrison song. I attach it as an example that could be used for worship song notation.

The “problem” (at least for me!!) is to combine several objectives in one format:

include all the words!
show the sections and arrangement (repeats, structure, )

show the chords – and when to play them
(Issue: is each chord played for 1 bar, 2 bars, half a bar?)
condense to 1 sheet for those learning the song OR the arrangement

condense to 1 column for those who know both
End-To-End (i.e. no repeats) is better for adding roles in rehearsal
i.e. when to come in, when to go up or down, take solos,…
avoid writing & reading “real” music
(though I’d like one stave on which to write instrumental link phrases)

This example of words and chords, is notated without “music” ..no bar lines or diagrams,
but with the chords arranged as “one chord per bar” — “/” for repeat bars reduces clutter.

BTW I used jazz-notation: “B-” instead of “Bm” to minimise the notation further.