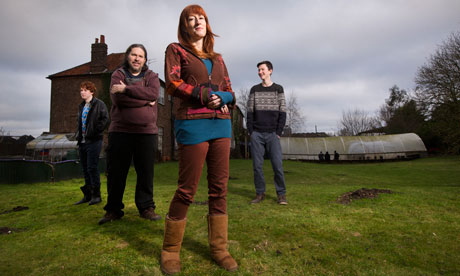 You may remember an article we wrote 18 months ago True worship – and its nothing to do with music. We are still involved with this wonderful project which houses destitute women (asylum seekers on appeal who have no government benefits). Back then we were helping fundraise for a home for women and babies.  This is the only home in England for asylum seeking women who would otherwise see their children taken into care.

I was delighted to see the project profiled in The Guardian newspaper this weekend. Amidst a winter of truly terrible news, so good to see a national newspaper picking this up.

Haven for the homeless

It’s 20 years since the Albrechts first invited a homeless person to stay. Since then, more than 300 have found a safe haven with the couple and their four children – they even moved to a bigger house to take in more and now they’re adding on extra space.

Maria Albrecht has only hazy memories of the first homeless person she and her husband, Scott, invited into their home to stay. But he was almost certainly an alcoholic, in his 50s or 60s, and he wouldn’t have had a shower in a long time. He slept on a camp bed in the couple’s sitting room: the family, with two small children at the time, were living in a two-bedroom semi.

That was about 20 years ago: since then, the Albrechts have welcomed approximately 300 homeless people into their home – some straight off the streets, others referred by the British Red Cross. “I know people think it sounds impossible, to just take in homeless people,” says Maria, “but the motivating factor for me is this: if I was sleeping on a park bench, I would hope someone would do this for me. So I do it for others.

“I know we can’t help everyone who’s homeless – but every night that even one person is in our home, that’s one night when one less person is shivering on the street.”

Today, the Albrechts live in a picturesque, red-brick farmhouse outside Watford: it’s surrounded by fields and there’s a large fishing lake in the back garden. It looks and feels like the very embodiment of a comfortable, middle-class existence in the London commuter belt, but inside there’s a bohemian air and, ranged around the house, as well as Scott, 50, and Maria, 51, and their sons, Justin, 18, and Francis, 15, there are several homeless women and two volunteer helpers.

It’s not an enormous house – the boys have their own rooms, and Scott and Maria have theirs, but the women share dormitory-like accommodation on the ground floor. And the house is certainly not palatial – on the day I visited it was raining and buckets had been placed to catch the drips coming through the roof.

Click through to the Guardian website to read the rest of the article. The comments are also interesting, especially the one that said: “I’m an atheist but I love reading about people like this. This is what Jesus did (apparently), this is his work in action”.

Last time we wrote about this project, one church was so touched that they pledged a regular gift to the project. If you’d like to do that please email us (we have a charitable trust that donations can be made through). As I said in the comments over at The Guardian, even a few pounds or dollars buys basics like rice, pasta, bread. The vast majority of the project’s funding is from private individuals with a few charitable grants. It means so much to this self sacrificing family to have others stand alongside them in support.

“The King will reply, ‘I tell you the truth, whatever you did for one of the least of these brothers (and sisters) of mine, you did for me.” Matthew 25:40