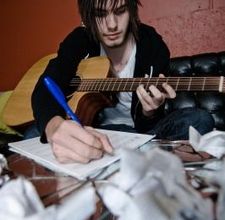 Today’s post is on songwriting, and the tips are relevant for people writing for church congregations. This kind of songwriting requires a different set of values and practices than writing a song to sing TO people, or a song people will just listen to. Writing songs that people need to join in with is tricky and I hope the 10 tips below will help!

1. Focus on one idea -most songs cover way too many ideas or themes, and the lyrics lack the punch of one focused idea. When you’ve written a verse and a chorus, the temptation is to move on to a different theme for verse two, and maybe a different theme again for the bridge! Stay true to your initial focus/idea and go deeper into it during verse 2 and the bridge. Resist the urge to pack ten theme into one song – aim for one theme!

2. Be brave and allow others to help – this is always hard! Try and emotionally detach from your song enough to allow people to critique it. It’s the only way to grow as a writer, and it’s definitely going to help your song be the best it can be! Get feedback on what is good and bad about the song, and use it as a learning experience. People will see things about the song that you as the writer, wouldn’t see. Don’t be defensive. Try and see it as a gift to you, to help your song be better!

3. Re-writing is the key – when you think the song is finished, assume that it’s not! Give it another few weeks, where you go over it with a fine toothed comb searching for things that can be improved. Have you really laboured to find fresh ways of saying what you’re saying? Have you defaulted to cheesy lyrics or cliches? Have you let anyone else hear the song and give you feedback? Re-writing can take an ok song and turn it into an amazing song!

4. It needs to work on one guitar – I believe that if a song is going to be useful to the global Church, it needs to work with one voice and one acoustic guitar (or one piano). Most churches are not huge and have a small handful of musicians. Often it’s just one person up the front leading on one instrument. Make sure your song doesn’t hang on some big musicial riff, or the drum beat, or the fact a huge choir are singing it. Does it work when it’s stripped right back to one guitar and one vocal? If not, I’d say the song is too reliant on instrumentation and probably isn’t ready yet. Keep working on it until it stands strong on just one instrument and one vocal. Try the song that way at a smaller meeting, or a home group. A great song will work just as well in that simple setting, as it does with a huge band.

5. Demo it simply – it needs to be shown to work on just one instrument. So if you demo it, I’d suggest doing a big full band demo, and also a one guitar-one vocal version, so the people hearing it can imagine leading it, whatever their setting. I’ve heard so many worship leaders from smaller churches say “I love that song, but I can’t imagine how I’d strip it down from the big album version, so we could use it at our small church”. Make it easy for them! And don’t think that a massively over-produced demo will hide a weak song – publishers are good at seeing through that ;-)

6. Make sure it works for the male and female vocal range – if the song is meant to be sung in church, it needs to be singable by both men and women (who have very different vocal ranges). Gather some guy and girl friends and have them all sing it with you. See if it works for everyone’s voices. If not, try and find a melody everyone can join in with. It’s really tricky to make this work, but many worship songs don’t – and half the congregation will be struggling to join in, or desperately trying to harmonise, to find a melody they can actually reach!

7. Avoid big octave jumps – these have been use a lot in worship songs (including mine!) over the past few years. But I keep meeting worship leaders who just can’t sing them. They reminded me that an octave jump is all very well for Bono, but not for most Sunday morning singers! It’s also true that an octave jump is easier to reach in a big arena, listening to U2, as everyone screams out the notes because the volume is so loud. On a Sunday, usually churches go for a low to medium volume, so the congregation aren’t going to push their voices as hard, as they feel exposed as everyone can hear them. Plus it’s usually early morning, which is a harder time to sing than in an evening U2 concert! Although octave jumps provide a great vibe to songs, I’d advise steering clear of such big melodic leaps if you want lots of churches to use them.

8. Use the song a lot before it’s ‘finished’ or recorded – the ‘Nashville’ approach to worship songwriting often involves writing or massively re-writing a worship song during the recording process. This has always made me uncomfortable, as how can you know whether it’ll work in churches if it hasn’t been test-driven in it’s final state? Several of my songs have been changed by others, right when we were recording them, only for me to find the changed had made them un-singable for most congregations. We couldn’t tell this in the studio, as there wasn’t any time to test out the new versions with churches. So I think a song shouldn’t be tweaked too much in the recording process. It needs to have been test-driven a lot, in it’s finished form, long before anyone records it. So be patient, and use your songs a lot before you commit them to a CD!

9. Write on a different instrument – don’t get into a ‘rut’ where you always write on the same instrument and your chords/tempo/rhythm and overall song vibe gets very ‘samey’. If you’re a guitar player, why not try writing on piano (even if you barely play!). Or if you always write with an instrument, try writing without one – just your voice. I bought a mandolin ages ago, and loved writing on that, simply because it was different and inspired different chords and sounds. Experiment.

10. Be yourself! – there’s a lot of pressure to write worship songs that sound like other worship songs. Don’t go for a certain sound, or chord progression, or style, just because it’s popular and working. Be YOU! We desperately need something fresh in the worship song pool, and it’ll only happen when people feel released to be themselves! You don’t need to be the next Chris Tomlin or whoever… just be YOU. Perhaps your style of music or lyrics will be really different – go for it! As long as people can understand and mean the lyrics, and the melody is singable for everyone, the rest is up for grabs. Be brave and be you – the church needs more of that :)

Thanks to Vicky for permission to use this post which first appeared at vickybeeching.com

Secret of the pop song – the ballad

Secret of the pop song – the breakthrough single

Is it just me or are a lot of worship songs mediocre?