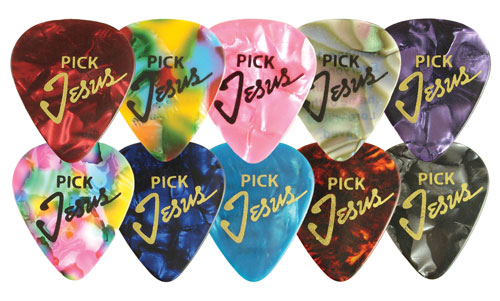 The other day I got an email asking for advice on what guitar picks I recommend. Now when I started Musicademy I vowed never to get into the “What picks/strings do you use” debate as it seems dangerously close to a sort of train spotting competition usually hotly contested by slightly strange bearded men wearing high visibility jackets who talk guitar serial numbers through their adenoids. “Oohh, the black .83 rock pick is the ONLY one to have as it gives you a much better tone than the…. etc”.

That said there are some things to be said use of different picks and associated technique (and I’ve never train spotted in my life although I do know far too much about Strat serial numbers).

Basically if you are playing acoustic or just strumming on any guitar you need a softer pick with a bit of flex in it. Too hard a pick here can sound metallic against the strings. Also if your hands sweat at all you need a pick that’s not so smooth it becomes slippery. For acoustic I’ve always been a fan of the grey .60 Dunlop picks. Thinner ones have too much flex and then you loose volume when you hit the guitar hard.
Slightly fatter picks produce more volume but don’t flex as much as I like. Generally anything beyond 1mm thickness I find is too thick for acoustic unless you are picking out individual strings.

Conversely for electric lead guitar you need to experiment with harder, less flexible picks particularly if you are playing lead guitar. If you are playing fast runs the last thing you want is flex in the pick which will only slow down the attack of your notes and hinder accuracy. I’ve experimented with all sorts of picks up to 3mm bass picks which are great for lead but not so good if you are playing a combination of lead and rhythm guitar so I’ve tend to stick to something just over 1mm.

That said if you are playing both single notes and rhythm which many of us do it’s really important to develop a pick technique that makes the best of both situations. You can achieve that by working on where abouts and how hard you grip the pick.

Firstly I’ve seen people grip picks so many different ways but a classic technique is to place the large part of the pick under your thumb with the tip facing 90 to the left (assuming you are right handed). Then place the left hand side of your index finger directly under the pick to grip it but don’t let the pick touch your finger above the first knuckle.

Now if you are working with a softer pick and playing lead you can get over the flex by gripping it hard and keeping most of the pick under your thumb, so just exposing the tip will help. Conversely for strumming expose much more of the pick area to the strings to allow it to flex and work on varying your volume levels purely by gripping the pick harder or softer.

Also if you are strumming try to relax your forearm, splay out your middle, ring and little fingers and loosen your wrist to let your hand act like a pendulum as it moves over the strings. Again the opposite is true for lead guitar. So if you are playing faster collections of notes tighten your wrist, push your middle finger tight against your index to restrict lateral movement and pick notes in almost a circular movement rather than just up and down which will help you gain speed and accuracy.

If you want more information on picking technique, we cover it in lots more depth on our Intermediate Acoustic Worship Guitar DVDs.

Ask the Expert – How can I keep my pick from slipping?