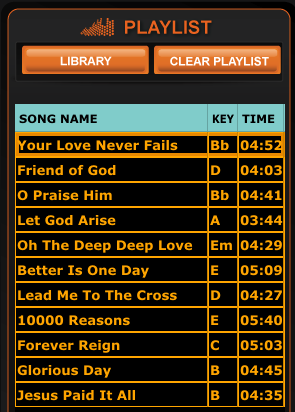 In Kenny Lamm’s first post on changing church worship styles he introduced you to East City Church which now continues its path to worship renewal. We have looked at needed technology improvements and the development of a worship leadership team. Today, we will explore a critical component of the transition–the development of a song list.

As East City Church begins to move towards a unified style of worship, there needs to be much attention given to the formation of a list of songs that will encompass the best of traditional songs and a great variety of contemporary expressions that will work in their setting.

First, several people need to be selected to create this important list. East City Church currently has a traditional and a contemporary service. Key people from each service should be selected to be a part of this group. Of course, the pastor and worship leader should be involved. Keep the group to a smaller number, say 5-7 members. In East City’s situation, the majority of the church attends the traditional service and most of the attenders of the contemporary service are knowledgeable of the songs sung in the traditional service, therefore, more of the modern songs selected for this list should be considered somewhat new to the majority of the congregation.

The newly-formed team should work through the following steps:

I see so many churches that are seeking to transition by starting with the praise and worship choruses from the 70′s and 80′s and ignore the great, rich songs coming from this decade. To ignore the great music of this decade ignores how God is active in the church TODAY. Also, in general, the music of this decade is much more rich in theology than the 70′s and 80′s. The songs of the earlier period are often the ones that are referred to as “7-11″ choruses–songs with 7 words that you sing 11 times. Some of those songs are very useful, and they certainly were pivotal in our worship transitions of the last century, but I urge you to not use that era of songs as your main diet for adding new songs to your corporate worship services. The vast majority of the songs in the top CCLI lists do not come from the earlier era. Also, the songs of the earlier era don’t necessarily speak in styles that are comprehensible by the non-churched community as well as more recent compositions.

Kenny Lamm, senior consultant for worship and music for the Baptist State Convention of North Carolina, is a frequent worship conference leader with a strong focus on equipping leaders in North Carolina (USA) and Southeast Asia. His blog, Renewing Worship, features posts that explore ways to renew–impart new life and vigor to–the worship in the local church.

Getting out of song selection ruts