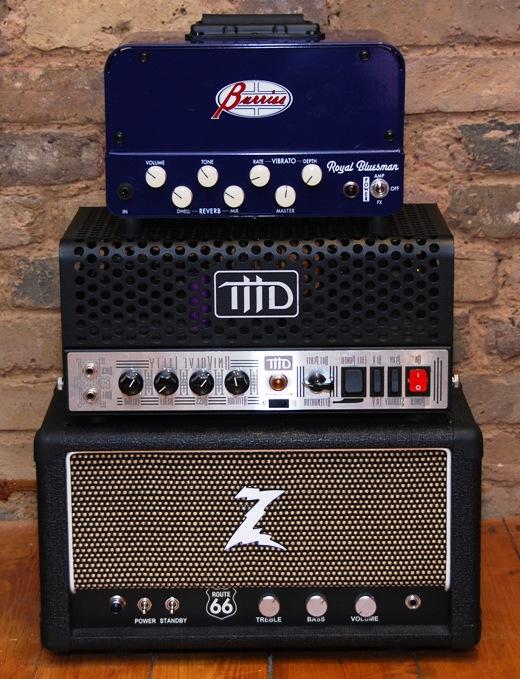 Guitar amps for a worship musician

I started getting into low wattage tube amps a few years ago when the THD Univalve came out. I had bought and sold various amps including Fenders (a twin and a Vibrolux), Marshalls, Musicmans (Musicmen?), Carvins, Voxes and some other stuff too and basically they were all way too loud for church worship playing. Even at some of the bigger conference festival stuff you couldn’t really open them up. So I set about the never ending task of trying to find the perfect low wattage amp. So here is the current list but I really only use the first two or three on the list think I’ll try and get the others sold off (maybe…).

8 watt 1×12 Champster
I documented this home made special a while back but here are the basic details. Basically the chassis is an 8 watt version of a 50s 5F1 Fender tweed champ circuit by Littledawg amps. It’s a very simple circuit with a lightweight chassis and all the good components inside. I built it into an old 80s Marshall 1×12 cab that I already had. It only has a single volume control, high and low Db inputs, a no-negative feedback switch that broadly makes the tone smoother or more aggressive and that’s it. Thing is 8 watts is just about the right amount of power for many a church setting. It means I can properly drive the power tubes and go between clean and dirty purely with playing dynamics and guitar volume control. Whole thing for under £250/$500 for a hand wired head and cab. Nice.

Burris Royal Bluesman
This is a clever little amp head. It is 18watts, Point to Point hand wired and powered by 2 EL84 tubes, has a tube rectifier, and really well thought out features. So you get reverb, tremolo, master volume, worldwide 110v/240v power, an effects loop you can plug a second guitar into, and, get this, with the little footswitch that activates the tremolo you can power a dozen pedals!!! How cool is that?? A true 1 plug amp solution! Unless of course you have a few pedals that need weird power supplies – like I do – which defeats the whole of object of it! Actually 18 watts is really loud – this’ll keep up with an enthusiastic drummer anytime.

THD Univalve
This was the first of the small amps with interchangeable tubes. I bought this in January 2002 at the NAMM music show in California. It’s the last one they had available on the booth and is one of a few ‘lefty’ versions. Aparrently in a wise crack joke somebody asked Andy Marshall (THD owner) if he could make them a left handed amp…b boom  cha… So he said ‘ok’ and did 100 I think with reversed face panels and backwards lettering. So this is that. Sounds really good but its 110v so I get a bit fed up with carrying around a 240v transformer.

Dr Z route 66
I got this again when the US dollar was weak and it’s got an amazing tone. At 32 watts it’s again cripplingly loud. Tubes are two KT66 power valves with an EF86 preamp tube. So it’s fantastically articulate and very pure sounding but deafening. I might try substituting the KT66s for THD yellow jackets with EL84 (vox type) tubes to bring the overall power down to 15 watts but we’ll see…

1964 AC30
I bought this really as an investment a few years back and so it doesn’t get used that much.  It’s a grey panel non top boost JMI Vox AC/30. Over the years it’s had some capacitors changed from original spec, had a replacement grill cloth and badge and a standby switch added. Transformers and the important bits are all original so when I got it I had a full overhaul done to the caps, tunes and internals left the standby switch in place.

1982 Marshall JCM800 2204 100 watt
I got this as payment for doing a session a few years back and I recon I got a good deal! The guy had it sitting in his garage for ages and due to lack of cashflow for his album was much happier to trade gear rather than pay the musicians for playing on his album. This is one of the early JCM800’s which basically the same as the old JMP100 plexi type heads and are very different to the later twin channel ones. The cab is the original matching one with 4 Celestion G12/80’s now known as the Classic Lead 80. It sounds great but to be honest its way too loud for anything except stadiums and the 4×12 weights a ton!

Its been great to hear your confessions on guitars and pedals to date. Feel free to fess up on amps now as well – comments in the box below.