3 reasons not to record a CD 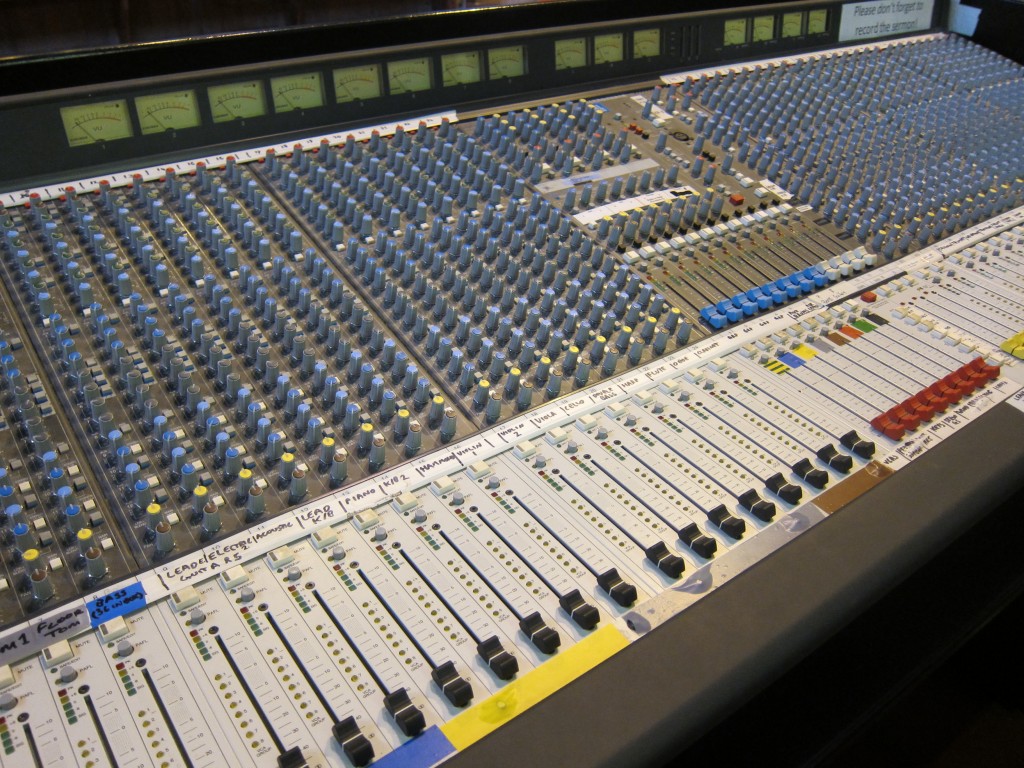 Last weeks’ post “10 Mistakes Churches Make When Recording” received loads of clicks and likes so here is the second installment from Scott.

Although (hopefully) humorous, each mistake I listed  in that original post relates to some real, common mistakes I’ve seen churches make when embarking on the wonderful quest to produce a worship album. This time around I’ll focus on the single most important consideration anyone (church, worship band or individual) can make when it comes time to record: WHY?

While initially that question may appear to fall into the “stupidly obvious” category, it is a question that has huge ramifications all the way down the line, and it is very worth considering carefully. Every subsequent question from “What is our budget?” to “Who’s playing on the album?” to “How many copies do we print?” hinges on being able to CLEARLY answer the question “Why are we doing this in the first place?” Even if the idea was a “God thing” that nagging question still remains – WHY does He want you to record? What is the purpose for which He has asked you to do so?

Now, while the number of good reasons to record is almost infinite, and while there are many legitimate reasons that are not-so-readily-apparent, there are some bad reasons to take a run at a full-production recording, especially if it’s your first, especially if it’s a church project. Of course, or at least hopefully, at the foundation is a desire to glorify God, however, even that is, essentially, only a partial answer; there’s always more clarity to be had.

At the risk of sounding pessimistic, I’m going to continue this series with some bad reasons to record. Remember these apply as a solo artist, a worship band, a church congregation, even a church organization.

1. It’s An Easy Way For Us to Make Money Doing Something We Love

I know, you want to raise some money for a new church sound system. You went to the board and they said “$25,000?! Well that’s crazy money! We just can’t commit that when our kids ministry is still using the same puppets we stole out of garbage bins from behind Sesame Street’s production facilities in 1974!” Then, one day, at 4am you were awakened from your slumber. An angel appeared, you were scared, he said “Don’t be afraid”, heaven opened and, like a flash of lightning, you realized you could raise it yourself – by selling the best worship album ever recorded.

The idea looks great, not on-paper, but until it hits the paper. The problem here is (like in all budgets) the expense, whether time or dollars compared to the potential return. When bands come to me to record, my first question is often “How many discs do you intend to sell and at how much?”. Consider a church of 500 people for instance. Let’s say every single person (man, woman, child, toddler, infant) buys a copy and forks out $20 (high for an indie release, but they love you). The most you could hope to recoup in that scenario is $10,000. Of course, it is more likely that about half of the family units will buy one, so you’re more likely to sell 150 “in-house” than you are 500. That takes the tally to $3,000, or, roughly $22,000 short of your sound system goal, provided all production, mixing, mastering and manufacturing is free.

How do you sell more CDs? Well, in today’s day and age of internet piracy, bands of the same kind being a dime-a-dozen (market saturation) and the general economy / market being tricky to penetrate – you tour. It’s the only way most indie bands (sacred or secular) can even break even. Now if the idea of packing your worship team of 10 into a Ford Focus built for four and hitting the road for 150 nights a year intrigues you, you may be on to something. And that sound system may not be so far out of sight. If you have a fundamentally connected web of churches, there can be some opportunity there (although you can bet they’re all thinking of the same fundraiser).

When I was pastoring a church a church of 150, we did the unthinkable and sold 687 copies of our first disc with limited touring (about 6 stops) and a single CD release party (without CDs… they showed up late from manufacturing). Going back in time I’m not exactly sure how we accomplished that feat, nor if it could reasonably be done again. It may be one of those things that falls somewhere between “phenomenon”, dumb luck and the grace of God.

Bottom line is you can make money on music, but you need to be highly realistic and put together a very accurate budget, with very reasonable projections before you put a down payment on that new PA.

2. Something Deep Inside Me Says I’m The Next Matt Redman

I’ve been a music pastor. Never in the paid sense; I was a pastor who loved doing music and so I added that to my portfolio out of passion for the work (before janitor, but after building administrator in my job description). I know what it’s like to get off stage after God has moved and think: Matt Redman, Tim Hughes, Charlie Hall, Martin Smith .. those guys are the luckiest guys in the world, and something tells me I’m just as good as, if not better than, the lot of them.. And it’s difficult not to think — if I could just get my name and face out there, surely I’d be Kingsway’s “next big thing.” While it’s not absolutely impossible, your indie CD release could be the gateway to a lifetime of touring, writing, worship leading and appearing on obscure Christian TV and radio shows, there are two issues for consideration here.

First, the odds of that success are stacked against you in an enormous way. Again, I don’t mean to kill anyone’s buzz, just to be honest. Just as 90% of the money in Hollywood (if not more) is made by 10% of the actors there (if not less) the number of worship leaders who “go big” pales in comparison to the number who work one or two jobs in order to support their weekly worship leading habit. Further consideration needs to be given to the fact that becoming successful (again, in *that* way) is going to be a long-term process, and a lot more work than cutting a single disc. Bands and solo artists who make a career of music generally do so after years of work in obscurity, complete with line-up and style changes, failures and disappointments galore. Those who don’t take long or work hard but still make it usually have sugar daddies (again, another column “How to Find Your Sugar Daddy”). Can God do the impossible? Absolutely. Is potential fame a great reason to tackle a recording? Not so much, in fact in the kingdom doing almost anything (preaching, serving, administrating, leading the kids ministry) “for the fame of it” generally turns out poorly.

The second consideration is more of an ethical / moral one. If the church (congregation, music department, organization) is bankrolling, praying for and supporting your project, one must ask one’s self if it is entirely fair to have personal fame as a primary (or even partial) objective. Now if you’ve saved up your pennies (and by pennies I mean several savings bonds) and you’re the executive producer (the cash behind it), clearly it’s your money to spend how you wish. If, on the other hand, the community is behind it in word, prayer and gold bullion, and you’re hoping this will launch you into stardom, one would hope you’d at least be very up front with your board, and very honest with those around you.

3. Because Being a Worship Leader / Band is a Lucrative Career

I know what you’re thinking – it IS for Matt Redman, Tim Hughes, Martin Smith, Darlene Zschech (pronounced “check” – I think) and it is true that there are some people making a dandy living loving God and leading people through music. But let’s go back to the “Hollywood” example (90% – 10%) which is not confined to worship, or Hollywood, or preaching, or any industry I can think of. The few, the proud, the brave and noble who are making the killer coin are, indeed, few in virtually any arena. They are a minority like top-level CEOs, high-end actresses, and Enron Executives. Church / Ministry / Non-Profit employees by nature are paid less than their comparable “worldly” counterparts, and church artisans are no different (sorry folks, if you want to rake in cash hand over fist while playing guitar, be the Jonas Brothers).

Consider as well, that almost all “lucrative” (and I hope none of them take it the wrong way) worship leaders / bands came to be in a phenomenal sense, rather than as a calculated stab at stardom.

Delirious was doing guitar / rock worship at a time in the early nineties when few were, in a densely populated, easy-to-travel country, just as people were awakening to and craving more modern sounds in their expression to God worldwide.

Matt Redman was a regularly-occurring worship leader at a church festival that literally exploded with growth as a move of God swept the Anglican church, and subsequently the world.

Darlene Zschech (maybe it’s ziz-chez..?) emerged as somewhat of an icon, worldwide, for a generation of (and rapidly emerging market of…) relatively recently leadership-empowered and musical women.

Now please don’t think I’m in any way detracting from the blood, sweat, toil, tears and prayers the aforementioned would have poured out along the way. But for every Darlene, Matt or Martin there’s a Dan (great guy I know, leads worship weekly in front of up to 100 people), a Mac (I think he fronts a Celtic band now), a Chad (lucky guy moved to Argentina) or a me .. I’m writing a blog about recording and the largest crowd I’ve led has been 1,500 people. Total worship album sales to date: 687.

Like potential fame, potential fortune is, theoretically, just not a good foundation for doing anything in the kingdom of God. In the words of a great Canadian musician by the name of Matthew Good “if you want to be rich, become an accountant.” If your plan is to press an indie worship disc and sell a billion copies to pad your retirement fund, think again.

Okay, now that I’ve probably blown holes in the dreams of every church musician who ever had a dream, it’s time to sign off this time around. Please don’t think I’m one of those “vision-killing-realists”, I’m not saying don’t record, don’t have hope and a vision, I’m saying first things first – why are you doing it? – and if you’re doing it for fame, fortune or as a “quick-and-easy-fundraiser” – you’re probably in the wrong game or at least in it for the wrong reason. I mean, hey, I’m working on my worship writing and have plans for some EPs in the not too distant future, but I have those plans for different reasons.

Scott Bartlett is from Canada and has worked with us at Musicademy on various projects. He has run a recording studio and music store, and in the past has been a youth leader, worship leader AND started a church. All crammed into 35 sleep deprived years!