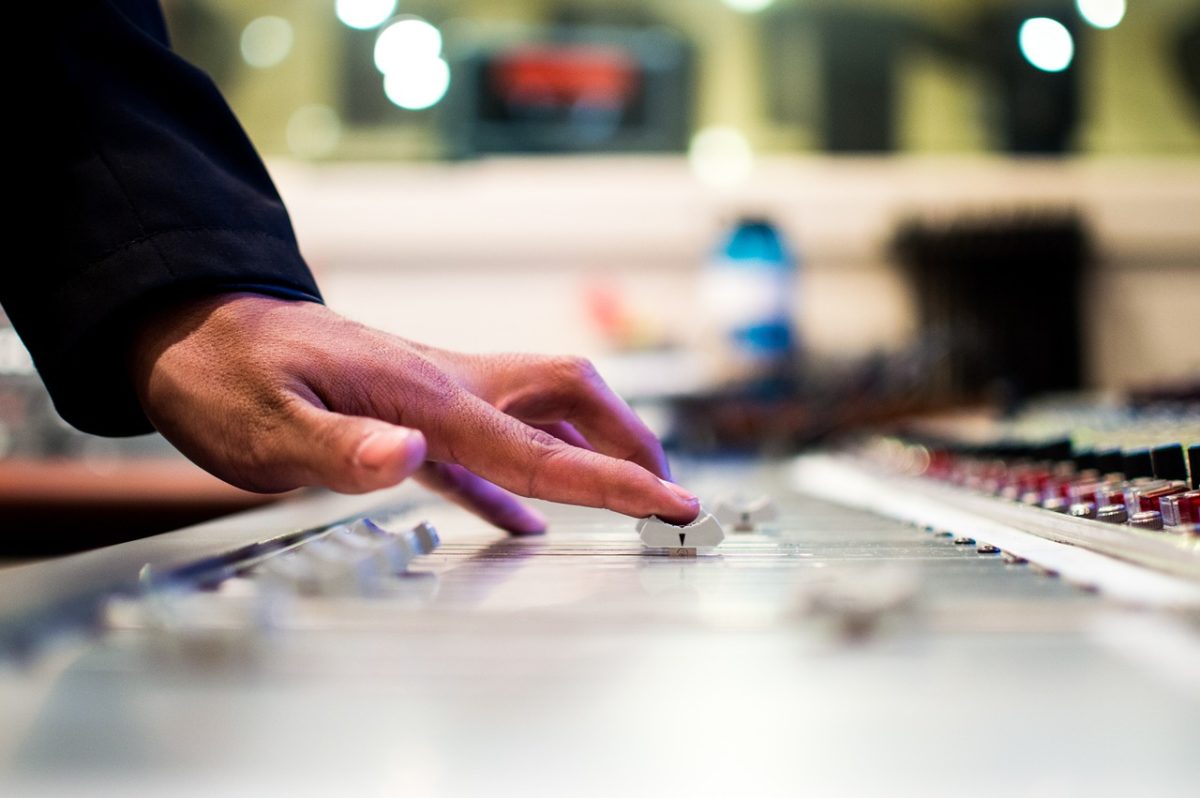 Sound men and women get a bad rap in churches. Musicians spend about 70% of their time complaining about their stage sound, their monitor mix, the irritating buzzes, the front-of-house levels – pretty much everything really.
Give musicians the slightest excuse and they’ll moan about the sound. They’ll behave like children if you don’t give them what they want. In normal circumstances you’ll only be a smidgeon away from giving them a hearty slap.
The sound man (or woman) is a mystery wrapped up an enigma, however. He or she turns up earliest, leaves after everyone else and has, arguably, the most important job of all.
It’s what it is. If you are a sound man/woman you are in charge of the sound. That sounds simplistic but consider this: you are in charge of the stuff that’ll affect one fifth of the congregation’s senses. That’s a pretty big responsibility.
If the sound person gets it wrong, the congregation will be like a salmon swimming upstream with little or no chance or reproducing during the worship time. It’s entirely understandable if a congregation cannot engage in worship if the noise coming from the PA system is no more than noise.
In short, you are in charge of an instrument. If you play it badly, it’ll hinder the worship. Play it well and you have done your bit to help people engage in worship.
Here’s a few pointers to help you along your way.

1 Do… listen to the music
Most sound people are volunteeered for the job initially because they are good at understanding technical stuff and plugging things in. Which is great for the set up but the whole mixing the music element is just as important. So don’t just be a techie. If you have been recruited to be in charge of the sound because you know how the equipment works then you will have to learn that this is not just a technological process. Now you are a musician whether you want to be  or not!. You’ll have to listen to the way the music ebbs and flows and adjust the levels accordingly. There are sound people, who get the levels sorted in the sound check and once that’s done, they sit back in their chairs and drink tea until the service ends. They might consider that they are there solely as a trouble-shooter – a rescuer in the event of a microphone meltdown – but that’s not it. You have to ‘work’ the desk throughout the service, paying attention to crescendos, troughs and the life of the sung worship. Those curly things on the side of you head are ears, so you might as well use them. If you are not sure where to begin, start listening CDs really critically. How many backing vocals are in the mix? how many guitars? What is the kick drum doing? What are the main rhythmic elements of the groove? And critically what sounds draw your attention and when? You see with a well produced album, at any given moment your ears will be drawn to a single sound or element, be it the vocals, a guitar lick, etc. So live you have to learn to pick out the things that people need to hear at any given moment and drop other sounds to the back. Different mixes can ilicit different responses in people too so pay attention to how diffiering styles of music are mixed and how those sounds make you feel. For instance classic rock mixes put the cymbals and guitars high in the mix and can sound really energetic whereas pop stuff makes the vocals and snare more prominent. So what levels and elements do you think are important for the worship music in your church?

2 Don’t… ‘shut down’ during the soundcheck
Things can get pretty fraught during the soundcheck. Somebody always wants a bit more vocal or drums, or the guitar isn’t sounding quite right, or the worship leader is still hassling you for more keyboards. Usually, there’s a problem character, who doesn’t mind letting you know that he or she isn’t happy. At this point it is tempting to go into shutdown mode, where the list of demands is so endless that the tether you have been hanging on to has come to an abrupt end. Then you are highly likely to leave the whole thing as it is, regardless of whether the sounds coming out of the speakers are good or evil. Take a few short breaths, tell everyone to be patient (people will pay attention because that’s in the Bible) and do your best to improve things.

3 Don’t… rush the drums
The drums are the platform and they generally dictate the volume levels of the band. If your church hasn’t yet purchased a drum screen then managing the drummer’s levels can be an absolute nightmare. Trouble is drummers vary massively: one week you get a ‘jazzer’ whose playing with impossibly light sticks, and the following week you’ll get Captain Caveman whose armed with baseball bats. It’s dreadful, and in this instance you have every right to ask them to either play louder (very unlikely) or play with a little more sensitivity (almost a certainty). You do have to exercise a huge amount of grace here: drummers are individuals and it’s hard to influence their styles, but spend a lot of time working on the sound and don’t rush it. Get a decent drum sound and you are halfway there. It’s also important that you don’t flatten everything, particularly the tom-toms. Don’t be scared to give the toms a bit of oomph: sound men seem to spend their life dampening toms when they don’t need to.

4 Don’t… stick to the same settings
You have to treat every service differently even if you are well familiar with the acoustics, the musicians and the songs. It is a good idea to keep some consistency, but don’t just get the sound set up and stick the settings you had the previous week – or indeed the previous 52 weeks. You have to be sensitive to the service, the congregation, the change in the worship band’s line-up and what the worship leader has planned. God moves in mysterious ways and it’s important that you are sensitive to that. If it’s heading in a flat-out praise direction make sure that the sound is in keeping with that, or if it’s sensitive and tender do your best to make sure that the mix makes sense and reflects what is going on.

5 Do… ask for help
Don’t be a martyr. If you have been lugging stuff all morning and there’s still plenty to do, feel free to ask people for a hand. If it’s a normal, loving church, this shouldn’t be a problem but if not, then you’re in the wrong place. Moving speakers and shifting things around can be a back-breaking siege, so it’s entirely justified to get some help. How about teaching the musician’s  how to set up and pack down their own mics? In most small pub and function type bands the musicians are responsible for their own PA anyway so why not get them to share the load?

6 Don’t… be a lone gunman
If you are the sole sound person, then you’re in a bit of a fix. You’ll start resenting this job if you are doing it week-in week-out, so make sure you have back-up. Train someone up, and give yourself a break from time to time. And don’t feel your skills are so invaluable that there’s no chance of anyone else being able to do what you do. You can start to fool yourself that you are more important than you are and that’s pretty dangerous in a church environment. Be humble, let go and let someone else have a go.

7 Do… communicate properly
A sound person who grunts at you is an unpleasant thing, so it’s important you engage with the worship band in a normal manner. Again, this sounds obvious, but monosyllabic sound men are not that uncommon and they can be wholly irritating. You may have got up earlier than everyone else and had to endure that quite horrific 20 minutes of thudding during the drum sound check, but try to stay bright and breezy if you possibly can. A lot of people are relying on you and they need to feel reassured that you know what’s going on. If all they get is a grunt as a response to their request for more vocals in their monitor, then you can expect a long and arduous sound check.

8 Do… be a team player
If the worship pastor organises get-togethers for musicians do your best to attend. Having a strong team is important and the sound person is a key part of that team. There does seem to be a sort of cultural divide between the sound people and the musicians when in fact, as we have mentioned, the sound person should regard him or herself as a musician. The quality of the worship is highly dependant on the sound person. Feel included and don’t set yourself apart.

9 Don’t … be taken for granted
Churches and church leaders can be in danger of overlooking their sound team, unless of course there is a demand for an equipment update and cash has to be spent. At this point the sound man/woman becomes even more unpopular than they were. Sound men/women have a silent role, which is ironic since they are in charge of the noisiest apparatus in the church. If you are in charge of the sound team, make sure your people do get the recognition and encourage them. If the musicians are being flippant and disrespectful it’s your absolute right to let them know.

10 Don’t… forget key pieces of equipment
Musicians can be an unforgiving bunch at the best of times, but if you forget DI boxes, key leads and cables, microphones and other bits and bobs that you know are vital to the smooth running of the sound check then you won’t win many friends. Be adaptable, bring gaffer tape, ensure that all the leads are packed in an orderly fashion so that you can speed up the setting-up process. If you forget the desk or a PA speaker, then it’s time to fall on your sword.

Our Sound Tech and PA Training for Churches course is available on DVD, as online downloads and also via our subscription site. Click here for more information.

Check out our other 10 Ten Do’s and Don’ts

All of Musicademy’s posts on sound and tech stuff